It’s no secret that the Twin Cities are gifted with a great and growing music scene. While many are familiar with the likes of the big Minneapolis bands of the past like Hüsker Dü, The Replacements, and Soul Asylum, up and coming local bands continue to move into the spotlight. Last night at the Fine Line, local Twin Cities (as well as Wisconsin) talent was abundant as In Lieu, Slow Bullet, Heart to Gold, Slow Pulp and Remo Drive played an explosive show to a sold out audience.

The first band on the bill was In Lieu. In Lieu wasted no time waking the crowd up and setting the vibe of the night. Delivering heavy hitting chords, their sound was that of perfected garage rock. The band had an angst driven attitude that swelled the room.

After In Lieu’s short set, Slow Bullet was up. Slow Bullet was raw, passionate, and heartfelt. With vibes reminiscent of somber, indie punk, the band were a pleasant listen.

The next band was Heart to Gold. I’m not exactly sure how, but Heart to Gold are a band I have somehow continuously missed — either at basement shows, or at actual venues. Knowing the buzz they have generated in the Cities made me really eager to finally see what they had in store. Sure enough, I was not disappointed. Coming out with full energy and grungy charisma, I was immediately delighted by their set. Heart to Gold was aggressive, dirty punk rock. The audience also seemed to know the majority of the words, which was really cool to see the love between the band and the fans.

Right before Remo Drive took the stage it was all eyes on Slow Pulp. Slow Pulp were mystical and entrancing, offering slow, yet transcendent songs. Everything about their stage presence was captivatingly beautiful and fun.

After Slow Pulp cleared the stage, it was time for Minneapolis’ own band of brothers – Remo Drive. As more people began to pack the room, it was obvious that the crowd was hungry for Remo Drive. Having recently signed to Epitaph, Remo Drive released a new album entitled Natural, Everyday Degradation that came out just a few months ago. I was interested to see how the new material would blend in with the older material from Greatest Hits.

As the lights went dim and the music stopped, the Paulson brothers took the stage with high energy, opening up with one of their best pop punk ballads, “Art School”. When the crowd heard the first notes, they absolutely went off the hook. Belting out the words to their familiar favorite, sweat, smiles and heavy moshing filled the room.

Balloons were immediately sent flying into the audience as both Remo Drive and the crowd batted them around the room. Not a single soul in the crowd was standing still, as circle pits, moshing, and crowd surfing ensued the entire show. It was absolutely insane to see the amount of energy radiating off the crowd. Fans were there to make sure Remo Drive’s homecoming show was a memorable one, and it absolutely was. 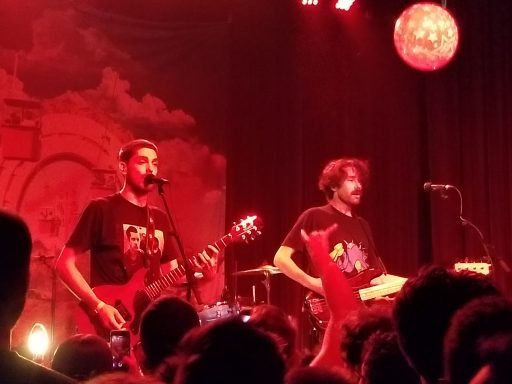 The band continued to power through their fast paced set, playing older stuff, crowd favorites as well as the new material. The new songs seemed to flawlessly blend with the old songs throughout their set. One of the coolest moments of the night was when they went into “I’m My Own Doctor”, as every fan in the audience began jumping and screaming the words, instantly hitting on nostalgia and delight. Basically, every single note Remo played was enthusiastically received.

One of my favorite things about Remo Drive has always been how instantly likable they are. Both Eric and Stephan Paulson are confident and professional on stage, but don’t take themselves too seriously. They know how to command an audience and have tremendous stage presence. It’s so much fun watching both of them play, doing what they love.

Overall, this was an incredibly fun show to be a part of. It’s always cool to see bands you first saw in a basement gain so much success and play to a wider audience. With Remo Drive, it all has been well deserved ride and they have absolutely earned their chops.

As Friday night bar goers filled the streets on August 24th a select group of people walked into the intimate theater known as The Pantages for an evening with Brazilian legend Seu Jorge. He is […]

Mercury Prize winners Wolf Alice will appear at The Fine Line.  At this time, a few tickets may remain.  Details can be found HERE. Wolf Alice is one of those bands that achieved immediate success […]