Where you from, son? Beaumont, TX, sir! Beaumont, TX? Only 3 things come out of Beaumont, TX: Steers, Queers and Party Rockers! And I don’t see no horns or a rainbow sticker! Purple describe themselves as Party Rockers and not bashful about it.

The band began when guitarist Busby’s then-reggae band shared a stage in spring 2009 with a band that Hanna Brewer was playing bass in. They decided they could do better. Much better. Hanna switched to drums and vocals, and lifelong friend Smitty Smith joined on bass a year later. The trio quickly bonded over a love of The Pixies, Yeah Yeah Yeahs, country, rap, reggae, beer, weed, the beach and a shared sense of adventure. Purple were born.

Since then they have been on several international tours with quite a few stops in Europe. Their debut album “409” was release in January 2015. Their lineup is:
Hanna Brewer – drums / vocals
Taylor Busby – guitar
Tyler ‘Smitty’ Smith – bass

Brewer may look like a cheerleader and her little yips at the end of a song and playful pouty attitude can fool the unsuspecting victim to take her lightly, but make no mistake: The lady is a beast on the drums. Just watching her made me exhausted after a few songs and how she manages to keep that tempo for a whole set while singing lead vocals is beyond me. Her voice conveys anger and aggression in a very punk way, yet at the end of a song she perks right up. Busby and Smith complimented Brewer’s energy and held their own. In one of their previous tours they gained some fans in Duluth and a group of the faithful make the track to Minneapolis for this show. They were there to rock out and brought up the intensity of the audience quite a bit. 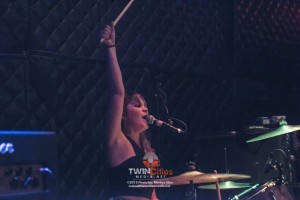 Purple played several new songs – Geniva in particular after some pleas from Hanna Brewer. If I have one improvement it would be the lights. The Triple Rock is challenging on it’s best day and having the singer placed in the dark area of the stage made it quite the workout. This photographer shed some tears white processing the images, but I hope to have captured some of Purple’s energy.
Tue 16 – Off Broadway – St Louis, MO
Wed 17 – Hi-Fi – Indianapolis, IN
Thu 18 – Founders – Grand Rapids, MI
Fri 19 – Beat Kitchen – Chicago, IL
Thu 25 – Ortlieb’s – Philadelphia, PA
Fri 26 – The Studio at Webster Hall – New York, NY
Sat 27 – Alphaville – Brooklyn, NY
Mon 29 – Great Scott – Boston, MA
JULY
Wed 01 – Smiling Moose – Pittsburgh, PA
Fri 03 – Summerfest – Milwaukee, WI
Sat 25 – East Warehouse (Bayou City Bonanaza) – Houston, TX

A Conversation With Mindi Abair & The Boneshakers: Two Shows At The Dakota, June 16

In advance of her two shows June 16 at The Dakota, multi-talented Mindi Abair took some time from a busy schedule to talk about her remarkable career and new album.  No Good Deed drops […]

Some nights you don’t really feel like doing anything other than watching Ozark on Netflix and drinking red wine on your couch (I’m not the only one who has these kind of nights, right?). Wednesday […]