It’s been a couple of decades since British band The Psychedelic Furs released their last album, but they are still touring and draw good sized crowds to their shows. Yesterday’s show at the State Theater was proof in point for a Billboard Magazine study that Generation X’s share of concert goers far outpaces their share of the population. Gen X was well represented and quite a few outfits were a trip straight back to the 80s. 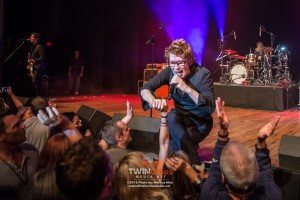 The Furs opened their set with “Heartbeat” and their show was heavy on fan interaction. Singer Richard Butler was crouched shaking audience members’ hands like he was up for re-election in November. No babies were kissed, but there was a brief kiss with an audience member. The show was polished but felt genuine and band members interacted and moved from one area of the stage to another with an ease that comes from years of familiarity. The Psychedelic Furs’ show was memorable and demonstrated that nostalgia can be as big a draw for fans as that “hot new artist”.
Set List:
Heartbeat / Mr. Jones / Heaven / There’s a World / Love My Way / Little Miss World / Until She Comes / Susan’s Strange / The Ghost in You / Only You and I / Wrong Train / Heartbreak Beat  / Highwire Days / Danger / Pretty in Pink Encore: Sister Europe / Sleep Comes Down

St. Vincent, touring in support of the recently released Masseduction, brought her singularly incomparable brand of rock and roll to a sold out Palace Theatre in St. Paul on Saturday night. Her Fear The Future […]

“Minneapolis has got it going on. There’s a lot of talent in this town!” – James Dent May Jr. (of Dent May) Is there really much more that needs to be said? I stress all […]

Like many i was introduced to Elle King by her single “Ex’s & Oh’s” playing on alternative stations in the Cities. Then I caught her interview on the Current and my interest rose quite a […]