The first round of dates for the highly-anticipated Slayer, Testament and Carcass tour are well under way and the demand has been off the charts. The iconic American thrash metal band from Huntington Park, California, consisting of vocalist and bassist Tom Araya, Kerry King, second guitarist Gary Holt, and drummer Paul Bostaph, are taking no prisoners. The performances thus far have been complete mayhem! This is all in support of the latest album Repentless. The Myth in Maplewood is the next stop on March 11th. 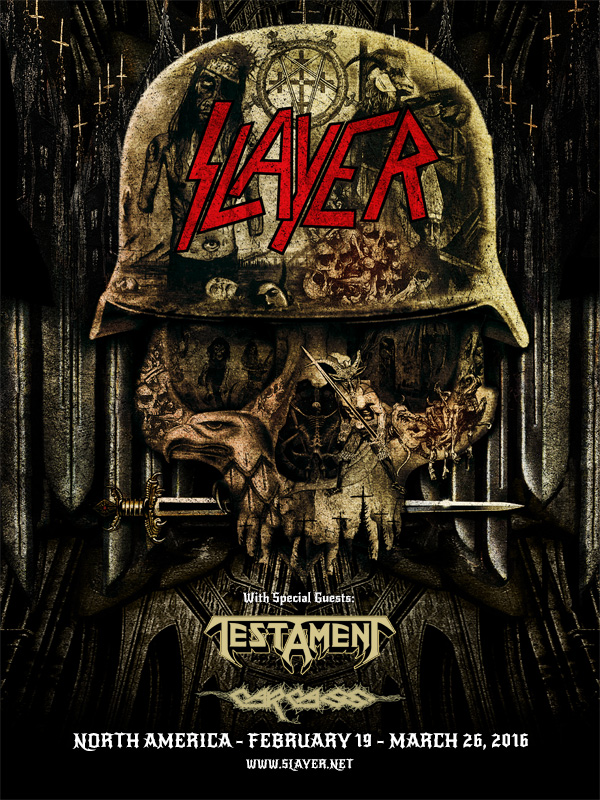 Formed in 1981 by axe-wielding pair Kerry King and Jeff Hanneman (RIP), Slayer are credited as one of the ‘Big Four’ thrash acts alongside Metallica, Megadeth and Anthrax. Slayer boast a heavy discography that spans 10 albums and has inspired one of the most hardcore fan bases in music.

Slayer have, without doubt, one of the strongest legacies in metal (and in music in general), with people like Dave Grohl hailing them was one his biggest influences, and countless critics naming as the most important group in the genre. Tracks like Raining Blood, South of Heaven, and Angel of Death continue to hold the same strength they once did today.

For at the latest info on Slayer, check them out online at:

Bands come and then they go. That’s just how rock and roll works. On some very rare occasions, they come back, and I am oh-so glad these guys came back. On the same day of […]

Well guys, I survived California. I honestly had the time of my freaking life. I mean, come on, chilling on a beach surrounded by some of the best of friends while listening to some of […]

So I finally got to see Fleetwood Mac! Joking, it was the closest I have come to seeing them though and this was a fantastic show to see Lindsey and Christine show off their new […]