Resurrection Fighting Alliance (RFA) president Ed Soares has announced that the RFA will be returning to Prior Lake, Minnesota on March 4th. The main event of RFA 36 will feature the first title defense of RFA featherweight champion Raoni Barcelos. He will put his title on the line against undefeated prospect “Groovy” Landon Vannata. RFA 36 – Barcelos vs. Vannata will take place Friday, March 4th at the Mystic Showroom inside the Mystic Lake Casino Hotel in Prior Lake, Minnesota. The entire main card will be televised live and nationwide on AXS TV at 10 p.m. ET / 7 p.m. PT. 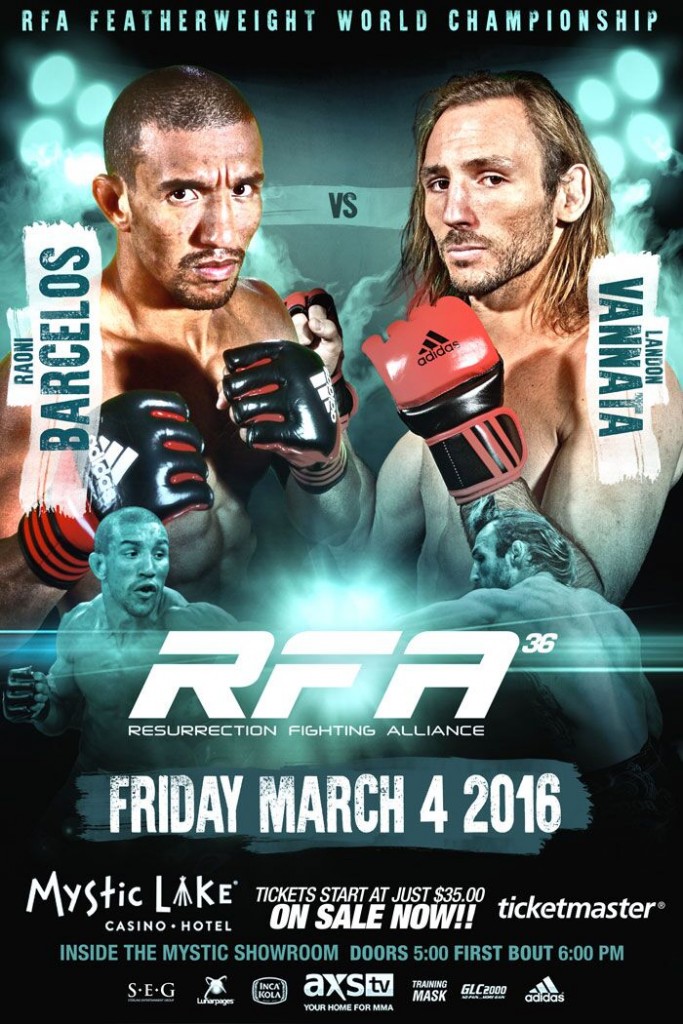 “RFA will return to Minnesota on Friday, March 4th with a fantastic title fight,” stated Soares. “RFA featherweight champion Raoni Barcelos will defend his title for the first time against undefeated Landon Vannata. These are two of the top prospects in the world at any weight and make RFA 36 the perfect start to a huge MMA weekend.”
Tickets for RFA 36 – Barcelos vs. Vannata are available for purchase now on Ticketmaster.com or the Mystic Box Office at 952-445-9000. You can also support your favorite fighter by purchasing your tickets through CageTix.com/RFA. There is no doubt that this will be an event not to miss.

About RFA:
RFA is a professional Mixed Martial Arts promotion that gives rising stars and top contenders the opportunity to prove their talent to fans and leaders in the industry. RFA presents live Mixed Martial Arts events on a monthly basis around the United States including Las Vegas, Los Angeles, Denver, and Sioux Falls. RFA can be seen live in over 45 million homes nationally through its television deal with AXS TV. Based in Las Vegas, Nevada, RFA is one of the most active and respected MMA organizations in the fastest growing sport in the world. (The Octagon, Ultimate Fighting Championship®, UFC®, and the eight-sided competition mat and cage design are registered trademarks owned exclusively by Zuffa, LLC. All rights reserved).

About AXS TV FIGHTS:
AXS TV Fights presents more LIVE mixed martial arts and kickboxing events than any other television network with 40+ LIVE world-class fight cards each year. “The Voice” Michael Schiavello and UFC Hall of Famer Pat Miletich call all the action as champions, challengers, and top prospects take center stage every Friday night at 10pE/7pP. AXS TV Fights can be found online, on Facebook and on Twitter. AXS TV is widely distributed in the U.S. via AT&T U-verse, Charter, Comcast/Xfinity, DIRECTV, DISH, Suddenlink, Verizon FiOS, and other cable, satellite and telco providers. The network is also carried in Canada, Mexico and the Caribbean.

Texas band This Will Destroy You is on a brief tour of the Midwest to support their current record “Another Language”. Their show at the Varsity was well attended. An instrumental post-rock band, TWDY are […]

The Fillmore Sails Away With AWOLNATION

Blink 182 is coming to town with Tom DeLonge. That has nothing to do with the show I was at on Monday but the amount of excitement I feel about this is insane and I’m […]

Between The Buried And Me Bring Cathartic Set to Varsity Theater

There are times when I like to throw myself into a show where I haven’t listened to much of any of the music that belongs to the artist playing and see what happens. Tonight I […]