Minneapolis Band Postina is an indie / poprock band about to release their new EP “Write a better End” this Friday and celebrate it with a CD release Party at the Pourhouse. Founded in 2008, the band gained attention being a finalist in the Basilica Block Party Battle of the Bands in 2009 and released their debut album “The Road”.
Since then the band has gone through some lineup changes and has added a new vocalist for this record. Their current lineup is:
Beth Renee – Vocals/synth
Andy Root – Guitar
Ryan Masterson – Bass
Dave Donovan – Drums
Faith Eskola – Violin/mandolin/vocals 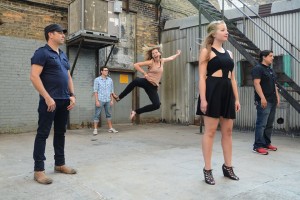 Postina really comes together in their current line up to the point that members have stated that they are willing to have tattoos with the others’ names.

At age 69 prop comedian Gallagher still swings the mighty Sledge-o-Matic with gusto, but after 4 heart attacks he has learned to delegate some of the work to his audience much to their delight. Gallagher […]

Minneapolis band Postina celebrated the release of their EP  “Write a better End” with a performance at the Pourhouse yesterday.  Founded in 2008, the band gained attention being a finalist in the Basilica Block Party […]