I’m still recovering from my trip out to Las Vegas for the When We Were Young festival. Honestly, I’m not sure I’ll ever recover. It was a dream of a weekend spent with the best of friends listening to the music that truly made me. Even though I still feel as if I’m in the nostalgic haze that the festival put me in, I knew I had to get back to work and put my life back together after a whirlwind of a couple of weeks so I grabbed a friend and we made our way to the 7th Street Entry for one of my “I only really know the headliner” shows. Bright-eyed and bushy-tailed yet exhausted, I was excited as we made our way through security and took over the corner of the venue while we waited to see what the Thursday night show was going to have in store for us.

Wichita, Kansas-born Yasmin Nur was the first act on the stage. Backed by an incredible band, I instantly fell head over heels for Yasmin’s heart-on-her-sleeve style and the way that her set seemed to be split between a very emotional vibe and a harder-edged energy. The beginning of the set leaned into her more sensitive side with cute and poppy songs that had this hidden darkness in the vocals and the words. The amount of passion that Yasmin has in each of her tracks is staggering and these slower more singer-songwriter-styled tracks absolutely gave the audience a chance to feel the weight of every word. Just when I was settling into the idea of a calmer opening set for the night, the mood shifted and Yasmin and her band jumped into a more grungey sound with endless amounts of angst and energy. Again, the way she was able to somehow balance the two sides of her set was amazing to me and left me completely sold on her and her music.

As soon as the second act, Jigsaw Youth, took the stage, my friend and I looked at each other as if trying to read each other’s minds. Did we love this? Did we hate this? Even when the short set was all said and done, we stood there debating what we thought about Jigsaw Youth. Why so much debate? This trio has a sound unlike anything we had ever heard before. They seemed to be in a bit of an identity crisis as far as what lane their music is in but, at the end of the night and as I woke up this morning, I realized that I loved that so much. There were moments of their set that reminded me of The Distillers with their sound and just overall attitude while other moments had me thinking about the more commercialized hard rock vibes that you get from a band like Cold Kingdom. As I sat there watching them power through their grunge-drenched set, I found myself falling in love with each of the three member’s distinct personalities that shined not only from their sound but also from each member’s stage presence. Although it took me a few songs to warm up to vocalist Maria Alvarez’s distinct voice, I found myself wanting so much more as she disappeared from the stage and the night moved on. Again, give this band some time. If you’re like me, your gut instinct will be to move on but there’s something special about this band that I think will catapult them to the next level in no time.

I mentioned how I wanted to see Pinkshift again sooner rather than later after seeing them open for Pup in April. Thankfully, the concert Gods were listening and they were the headliners for the Thursday night show. Why did I want to see them so badly? Well, their performance back in April had blown me away and honestly, there have been many nights where I think back to that night. It’s odd but something about them had me hooked. From their stage presence to their sound, everything was just perfect about them that night and I was dying to see them hold their own as a headliner in a more intimate venue. Holding their own would be an understatement when it comes to how they commanded the stage and audience on Thursday night. From the moment they took the stage until the bitter end of their set, they had the entire room in the palm of their hands in the best way possible.

There’s a reason that Pinkshift seem to be taking over all of the “bands to watch” lists in the alternative mags and zines. Like the two acts before them, they have a sound all of their own. I would call it bipolar pop-punk with a hard edge but that’s definitely not a set-in-stone genre by any means. There are moments when vocalist Ashrita Kumar has a very bubblegum-pop sound and style in her performance that is quickly followed up by moments of straight rage and angst. The way this woman is able to get you stuck in her world is amazing and it’s a world that, although all over the place, I never want to leave.

Being in Las Vegas surrounded by sixty-thousand people all with a common love of nostalgic emo music was great but it was shows like the one on Thursday night that I live for. There was something so genuine and so real about all three of the performances. Each of the acts had something to prove and they absolutely did that and then some by the time the night was said and done. It was truly a perfect way to ease back into reality. 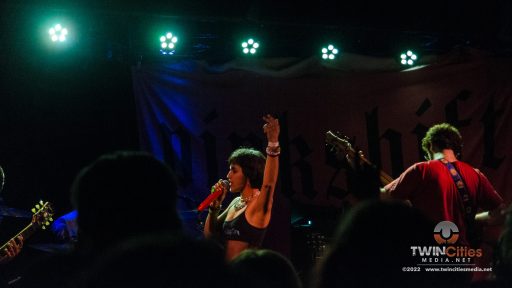 My phone buzzed in my pocket. I had a notification from Bandcamp that Self-Evident’s new album was available. A few taps on my phone later I had it purchased and downloaded. All I need now […]

Pig, Julien K and Ghostfeeder made for a great night at the Amsterdam

On Saturday Matt, another TCM photographer, and I went on a musical double date downtown St. Paul. He went to Xcel to be with a kind, sensitive redhead. Me, I went to the Amsterdam for […]