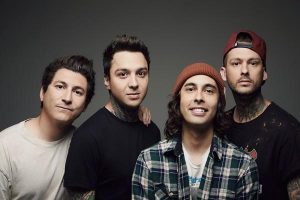 Six years ago, Pierce the Veil was playing small clubs and side stages at Warped and other music festivals. With the 2012 release of their album Collide with the Sky, PTV exploded, selling out North American and UK headline tours in 2012, 2013, and 2014, and headlining 2015’s Warped Main Stage. The band spent years actively developing relationships with its fans through meet’n’greets while on tour and extensive social media outreach (numerous poignant stories told to the band by fans have found their way into PTV’s songs), all of which has established the band’s massive, passionate and fiercely loyal fan base. The band’s fourth album, Misadventures, was released May 13 (Fearless). Don’t miss your chance to see Pierce the Veil at the Myth September 13.  Tickets are available

Donnie. If I had to pick one, it would be Donnie. Honestly, New Kids on the Block were before my time. I went into last night’s show not knowing what they sang or what they […]

Mae Simpson fans were treated to an intimate and thoroughly enjoyable listening party Friday at El Diablo Guitars.  As an appetizer for the band’s soon to be released EP Did You Make It Back?  It […]