For those of us who grew up as children of New Wave (you know the cool kids of the 80s) New Order and Joy Division are essential bands. Peter Hook was a founding member of both bands and is now touring with his band The Light performing “Substance”. The 2 LP album will be performed in it’s entirety.

To make things even more interesting Twin Cities DJ Jake Rudh will be opening their show on 10/30 at First Avenue. Rudh has been hosting “Transmission” radio shows and dance nights for years as a tribute to the the great music of New Wave.

I for one am immensely looking forward to the show. Tickets are still available HERE

Released in August 1987, New Order’s Substance was originally conceived as a way for Factory Records boss, Tony Wilson, to play the New Order singles on the CD player of his new Jaguar car. Substance became the best selling New Order album ever upon its release, the double LP going on to sell 2 million copies in America alone. Widely considered New Order’s strongest album, “their most popular, well known, highly rated and arguably the most influential” (Sputnik Music), Factory Records’ 200th release featured the bands seminal 12″ mixes of their singles as well as versions of “Confusion” and “Temptation re-recorded” for the LP. Running from “Ceremony” in 1981 up to “True Faith” in 1987 (again recorded especially for the album), the set takes in the high points of New Order’s catalogue, including “Temptation”, “Thieves Like Us”, “The Perfect Kiss” and “Bizarre Love Triangle”.

Released the following year in July 1988, Joy Division’s Substance features all the singles which did not appear on the albums such as “Transmission”, “Komakino”, “Love Will Tear Us Apart” and “Atmosphere”, as well as their b-sides, tracks from their EP An Ideal For Living and the Factory Records sampler. Factory Records’ 250th release, it begins with “Warsaw” and takes in the development of the band through “Digital” and “Dead Souls” to the band’s final tracks. The collection demonstrates the same energy as a full length LP with several key B-sides added. Allmusic called it “the best adjunct to the two albums anyone could want.”

Peter Hook & The Light have toured Joy Division and New Order’s albums extensively since debuting Unknown Pleasures back in 2010 with dates all across the world which have been very well received by critics and fans alike. 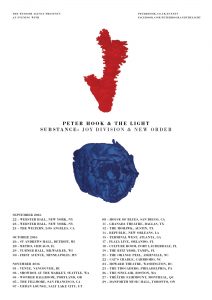