Although the rain outside seemed to have no end in sight, the mood inside the Orpheum Theatre Tuesday night was one of merriment and anticipation. The crowd to see Paul Simon was an older one, but the energy was as upbeat and ready-to-groove as any other.

Once people had found their seats in the beautifully ornate theatre, Simon’s eight piece band began to jam right on time. After a few minutes of everyone waiting on the edge of their seats he took the stage, looking as cool as ever in a leather jacket. He opened up the night with “Proof,” and after “50 Ways to Leave Your Lover” he stopped to thank the crowd.

“I’m so happy to be here, much happier than I was in March…” he laughed. “I was here to play Prairie Home Companion. But, ‘ya know, that’s in Saint Paul…” The crowd roared with applause. Simon then continued his set with “That Was Your Mother” and lots of moving and shaking on both his and the crowd’s part.

Later in the set Vincent Nguini, Paul Simon’s guitarist of 25 years, took center stage to tell the story behind “Spirit Voices”. Paul had been traveling through Brazil and made his way to a “healing man” who had him drink ayahuasca, a herbal drink known for its psychedelic effects. “You will see an anaconda, but it isn’t a real anaconda, it’s the opening up of your eyes and your soul,” Vincent recalled, “…and if you’re going to throw up, do it over there!”

The rest of the set flew by with lots of dancing and a few Simon & Garfunkel songs sprinkled in. After “You Can Call Me Al,” everyone left the stage for no more than thirty seconds, until the first of two encore sets started. During “Still Crazy After All These Years,” couples flooded the aisles and slow danced for the entirety of the song, much to the venue’s ushers’ dismay. 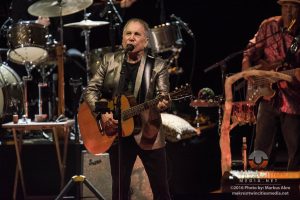 Mr. Simon finished the night by playing Simon & Garfunkel’s “The Sound of Silence” with the accompaniment of just his guitar and, of course, the backup vocals of everyone in the audience. Holding his guitar in the air triumphantly, Paul Simon waved goodbye and thanked his fans. As everyone rushed out of the theatre the crowd was full of voices retelling their favorite moments of the show, and when they got outside, no one seemed to mind that it was still raining.

Set List: Proof / The Boy in the Bubble / 50 Ways to Leave Your Lover / That Was Your Mother / Rewrite / Kansas City / Dazzling Blue / Slip Slidin’ Away / Mother and Child Reunion / Me and Julio Down by the Schoolyard / Spirit Voices / The Obvious Child / Stranger to Stranger / Homeward Bound / El Condor Pasa (If I Could) / Duncan / The Werewolf / The Cool, Cool River / Diamonds on the Soles of Her Shoes / You Can Call Me Al
Encore: Wristband / I Know What I Know / Still Crazy After All These Years
Encore 2: Late in the Evening / The Boxer / The Sound of Silence

The X Ambassadors and “The Beautiful Liar Tour” will be visiting us here in Minneapolis on November 9th at the Varsity Theater; Tickets are still available HERE and we can’t wait for this awesome show! X […]

Wednesday Night At Mill City Nights Was All About Being Naughty

Mill City Nights was slammed Wednesday night for Naughty By Nature as they stopped for a performance in Minneapolis. The floor on the main level was nicely packed and if you weren’t at your desired […]