Minneapolis-bred rapper, producer, hardcore musician, punk philosopher and co-founder of the hip hop collective Doomtree, P.O.S released his 5th studio album “Chill, dummy” in January with a great show at First Avenue. Now he returns to the Mainroom this Friday 3/17 to celebrate the release of the vinyl double LP. Tickets are still available HERE 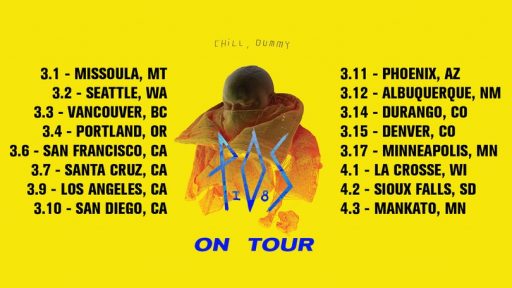 Doomtree co-founder, punk philosopher and lyrical bomb-thrower Stefon Alexander, aka P.O.S, makes tight, declamatory music that builds on the Minneapolis-bred rapper and producer’s penchant for grinding beats and radical lyrics. Known for welding hip-hop with guitar squalls, screamed vocals, and futuristic beats fit for a Berlin nightclub, P.O.S steps even further into genre-blurring territory with Chill, dummy, his first official release with Doomtree Records since his 2002 debut Ipecac Neat. The album reflects on the past three years since a near-fatal kidney transplant sidelined him from making music and deals with the the difficulties of trying to maintain peace of mind and navigate through a confusing world which is becoming increasingly more alienating. P.O.S’ production fingerprints are all over this one as he maneuvers through a wide range of sprawling beats contributed by himself, usual suspects Lazerbeak and Ryan Olson, and newcomers Cory Grindberg and Makr. Several friends touch down along the way to offer up biting commentary and varying points of view (Allan Kingdom, Astronautalis, Kathleen Hanna, Justin Vernon, Open Mike Eagle, Busdriver, and Lady Midnight to name a few), but the album never suffers from an oversaturation of scattered voices, instead using everyone’s individual ethos and strengths to build a unifying call to arms. The result is P.O.S’ most bold, honest, and daring work to date, so Chill, dummy.