When I promise to see an act again, I mean it. Even if that means missing big shows like Florence & the Machine or Ed Sheeran. If I write about catching an act next time they come in town because they blew my mind or were just that beautiful, I will do it. That’s how I found myself at The 7th Street Entry last night instead of one of the mega shows happening at Target Center or The U.S. Bank Stadium.

I was a bit surprised when I got to the 7th Street Entry in downtown Minneapolis to see a line stretching down the block for the Noah Kahan show. It wasn’t that I was surprised that he could sell out a small venue like this, more than he could do it on a night with so much more going on in town. Regardless, it made me so happy to see that he was getting the attention that he more deserved and I had a giant smile on my face as I pushed through the young crowd and claimed my spot against the back wall of the intimate venue.

There was a sense of excitement in the air as opening act Dean Lewis took the stage. It was hard to determine if that excitement was in anticipation of Noah Kahan or for Dean Lewis because as soon as Dean kicked into his set, the crowd started singing along in the most beautiful way. Just a couple songs in and Dean addressed the crowd, “You guys seem like a great and fun crowd so I’m going to play my slowest and saddest song now. If we can get through this then we will be okay!”. He wasn’t kidding, although majority of Dean’s sent leaned towards the somber and depressed side of things, that song took the cake. That being said, the atmosphere from the audience didn’t waiver and even when the songs were sadder than sad, there was this excited energy in the room.

Just like the first time I saw Noah Kahan, I was falling more in love with Dean with every passing song. Although his set was only forty minutes, I feel like his voice and style easily got stuck in my head and I woke up humming along to one of his songs this morning. So maybe Dean isn’t quite a household name like Noah is quickly becoming but I don’t think Dean is that far behind. He played his new single “Seven Minutes” towards the end of the set. He explained that he and his friend on backup guitar and vocals would be playing a stripped down version of the song but urged the sold out crowd to imagine horns and excitement and things. As he kicked into the ridiculously catchy song, no imagination was needed to picture this song as a hit. I’ve talked about it before but you know when you hear something and it just has “it”? “Seven Minutes” and Dean Lewis have “it” and just like I said when I saw Noah for the first time, I truly can not wait to see what the future holds for Dean and can’t wait to catch him again when he comes back, 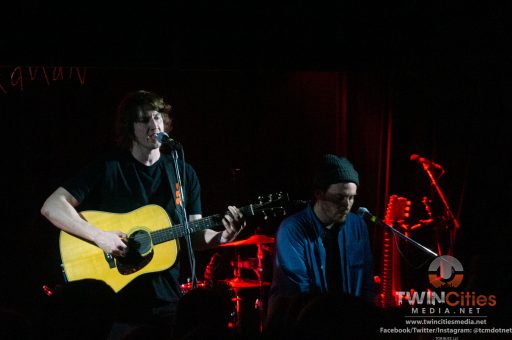 The only reason I know who Noah Kahan is because of him opening for George Ezra back in May of this year. Noah had me hooked throughout his quick opening set that night and I swore that I would catch him the next time he came to town. I know that it’s only been a couple of months since I’ve seen Noah but a lot has changed. When I saw him on the giant stage of First Avenue, there seemed to be a touch of nervousness as he addressed the sold out audience there. Although last night was also sold out and in a much more intimate setting, Noah seemed to be a bit more comfortable with the audience and being in the spotlight. The self-proclaimed “Jewish Ed Sheeran” (which got a huge roar of laughter out of the audience including myself because it is so freaking true) wasted no time and jumped into a set of beauty and emotion.

With only one EP and a few singles, Noah is still definitely a newer act but if you didn’t know his history or the fact that he is only 21 years old, you could easily be fooled into thinking that Noah is a seasoned veteran who has been doing this for years. The way every single audience member was singing along to every word was astonishing. It wasn’t the obnoxious kind of singing either. Although you could hear the audience, it was obvious that they were trying to stay quiet enough as to now overpower the beauty of Noah’s vocals. This whole mentality created a goosebump inducing atmosphere. It was honestly one of the most beautiful things I’ve seen at a concert lately.

Noah seemed pleasantly surprised and shocked by the way he was received having played the Entry exactly a year ago to only four people. He was humble and honest as he thanked the crowd for coming out and lending their ears. The amount of respect that she he showed for the sold out audience was gorgeous and same with the respect the audience showed Noah. I think everyone that attended last night could have stood in that venue for hours on end just listening and watching Noah with no complaints.

Sure, I could have gone to one of the huge shows going on last night but I wouldn’t have gotten the same kind of goosebumps I got from last night’s intimate 7th Street Entry show. Sure, production value in a concert is great but have you ever been to a show where you could literally feel the music crawl up your spine and keep you warm? Have you ever seen the smile on the face of a 21 year old who just sold out a venue to eager ears? Those are the moments I live for and that’s why last night was a perfect night.

Photos by David Rubene As the crown at the Mill City Nights began to pine and shuffle for any sliver of space that was closer to the stage, the anticipation grew strong for the SOLD […]

Marah In The Mainsail are touring hard and stopped by the First Ave Mainroom on Friday night. They are out on record label Last Triumph’s yearly “The Take Off Tour”, touring their way down to […]

Andrew W.K. Lining Up Huge Party at the Varsity Theater on September 14th

With the release of his latest music video for “You’re Not Alone,” the lead single from his recently released fifth studio album, You’re Not Alone, Andrew W.K., a.k.a the “King of Partying,” has been hammering […]