Whoever thought “What’s a sweet country gal doing opening for Social Distortion” hasn’t met Greenville, SC’s Nikki Lane. She’s country and I am sure she can be sweet but she has more punk attitude than most bands that label themselves punk these days.

Her lyrics are hard hitting and behind the southern twang is a sharp mind and a blistering tongue. Her 2nd album “All or Nothin” was produced by Dan Auerbach (Black Keys) and release in 2014. Since then her songs have been a constant on The Current and other radio stations. This was her 3rd time playing First Avenue but her first time with a band to back her up, which she described as a lot less scary then being on stage alone with her guitar. 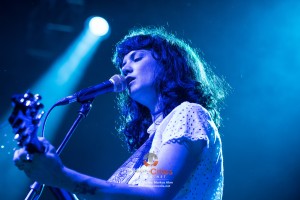 She is not afraid to get personal. She described her divorce and during her song “Man up” she ripped a ring of her finger and threw it to the ground. Lane is drawing comparisons to other country singers but also to more modern songwriters. Wanda Jackson, Neko Case, Lucinda Williams and Likke Li are names frequently thrown at her. But Nikki Lane does not want to remind you of anyone else. She is real deal, genuine, rough, sweet and quirky all at once and that was just fine on a hot and humid Friday night at First Ave.

The year is 2007, I had never been to a music festival in my life and had never seen a concert on the level which I was about to experience. I decided to break the […]

As I walked into the Fine Line last night it felt a bit like coming to see an old high school flame. You know the one you kinda lost touch with, but every time you […]