With her magnificent voice and fathomless lyrical imagery, Neko Case swirled her way into a sold-out Palace Theatre on Thursday night. This was the first stop of her current tour supporting Hell-On, Neko’s latest release.

Opener Thao came on right around 7:30. The founder of Get Down Stay Down was on her own Thursday night. She rocked out on several different instruments, including a mandolin and petal steel guitar. She had a folky rock sound, that resonated through the unusually crowded room. Sonically, Thao and her guitar were more than just the sum of their parts, and her vocals swelled around as the theatre filled to capacity.

Case and her band were warmly welcomed by the eager audience. With dark piano notes opening the set, “Pitch Or Honey” started like a storm swirling off the gulf coast.  Neko Case plucked haunting notes on her acoustic guitar as the storm grew closer. “Moonlight reflected is many times stronger”, the anxiety grew and by the middle of the song, the gale made landfall.

“Deep Red Bells” had the audience sheltered in place, all attention directed at the stage. No one spoke, just rapt attention as Case wove her tale of murder on the roadways. The storm continued to rage into “Bad Luck” and “Oracle Of The Maritimes” The eye made a brief appearance during “Halls Of Sarah”, giving the crowd a brief respite.

As the eye wall passed, the winds kicked up again with a breathtaking version of “Hold On, Hold On”.  As the storm moved inland it did not lose any strength, with the encore including “Hell – On” and “This Tornado Loves You” Case, seeming perfectly relaxed, effortlessly crushed the high notes.

With boiling lyrics and simmering arrangements, Case makes music where the rules don’t apply. Yet her presence is reassuring, like the beams of sunlight shining through the last of the storm clouds. We will survive.

Encore: Hell-On The Pharaohs – This Tornado Loves You – Loretta – Ragtime 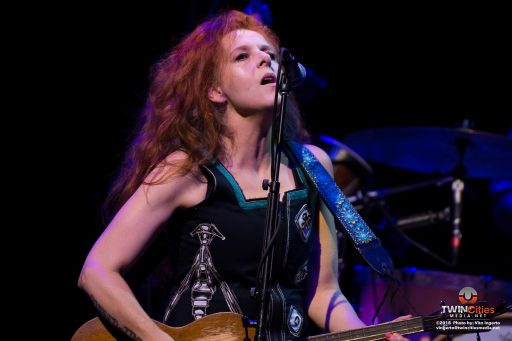 This year has been a true gift in the shows I’ve seen and some of the distances I have gone to make it to shows. The first time I saw Stapleton this year was in […]

The Devil Makes Three turn First Avenue into their Back Yard

14 years into their life as a band, Santa Cruz, CA bluegrass band The Devil Makes Three decided to change things up a bit with their new album “Redemption & Ruin”. The record covers songs […]

I don’t know the last time my apartment was this clean and my cats were so happy. With only one show this week, I quickly came to terms with the fact that my only social […]