It was a back to back visit at the Fitzgerald Theater for Neko. Friday, she was part of the Wits Radio Show and she returned for a concert on Saturday evening. Neko has been a fan favorite of local public radio station “The Current” since its inception 10 years ago. A tote bag designed by her was part of the member gifts a few years ago.
The show was opened by Brazilian artist Rodrigo Amarante who took to the stage with just his guitar and a smooth voice that managed to transport the audience to a beach in Brazil, toes in the sand and a Caipirinha in hand. 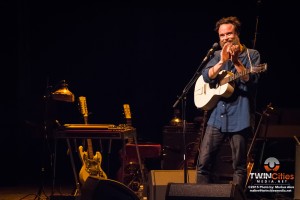 Before Case’s set an announcement was made that no filming or photographing was permitted and devices may be confiscated. Neko is serious in her commitment to this policy. She skipped an encore in Portland a few days ago as one person would ot stop filming. To their credit the St. Paul audience complied with her request. This may be a stance not popular with all her fans but one I support. Photographing several shows a week, I experience the disconnect from the music and the artist during the songs I shoot. I respect Neko for her commitment and her desire to connect directly to her fans rather than through a 5 inch screen.
Neko opened her set with an acoustic version of “Nearly Midnight Honolulu” featuring just her and a backup singer. She treated her fans to a variety of songs from her latest album “The Worse Things Get, The Harder I Fight, The Harder I Fight, The More I Love You.” as well as older material. She strapped on a guitar after the first few songs and proved her skills on that as well as a vocalist. Case proved her comedic talents as well in her interaction with the audience between songs. Overall this was a very enjoyable show.

The New Pornographers at First Avenue

I went into the show last night with no expectations. There haven’t been many shows I’ve been dying to see lately but, with a full week of concerts coming up, I knew I had to […]

PREVIEW: Suicide Girls Will Be Sure To Dazzle Mill City Nights on October 9th

Cover photo by Ed Jacobs Article photos by Derek Bremner Our favorite alternative pin-up bombshells are bringing back the most popular Burlesque Tour in US history. The best part of all, there is a golden opportunity […]

It was difficult to believe that for how close I live to The Myth (ten minutes tops in traffic), it’s been over a month since I’ve been there for a show, and this show marks […]