Morta Skuld first started bursting eardrums in the Midwest back in 1990. After 2 well received demos, the band signed with UK-based Peaceville Records and subsequently released 3 underground death metal classics: 1993’s Dying Remains, 1994’s, As Humanity Fades and 1995’s For All Eternity.  After sensing the musical winds shifting, the band called it quits not long after releasing the self-financed Surface album in 1997. 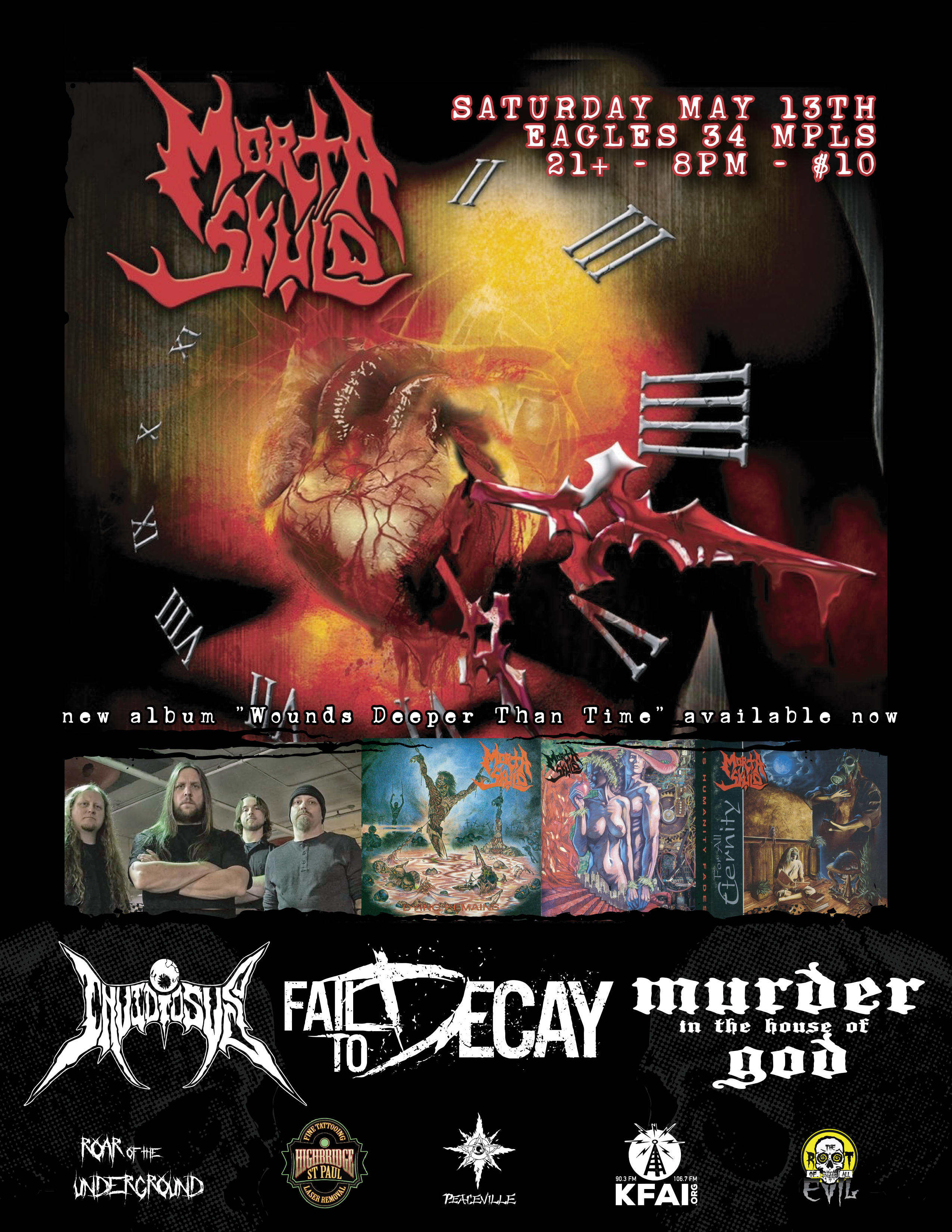 Guitarist and front-man Dave Gregor tells the Metal Evangelist in an interview, “It was around 2011 when we reformed with the demo line-up.” This led to the recording of a couple new songs and the release of 2014’s Serving Two Masters EP.  The nostalgic line-up wouldn’t last, but new blood was infused into the band by adding drummer Eric House (ex-Jungle Rot), then bassist AJ Lewandowski (Emblazoned, Decrepit Birth) and finally lead guitarist Scott Willecke. “We started doing some shows and things started getting pretty good, so then I was like ‘hey, let’s write some new stuff.’ I don’t want to just sit here and be one of those bands that we’re just gonna play all our old stuff and that’s what we’re going to rest on.”

2017 marks Morta Skuld’s official return after 20 years with a brand new album Wounds Deeper than Time, released once again by Peaceville Records.  Oftentimes bands that release comeback albums do so in a vain attempt to re-capture past glory and end up falling far short.  Not the case with Morta Skuld who picked up right where they left off and built upon their former work with renewed intensity.  Of the new line-up Gregor says, “All three of [these] guys are all very gifted. I appreciate everything they bring to the table.”

Wounds Deeper than Time is a raging anthem that speaks to the frustration of life in today’s America with songs such as “Hating Life,” “My Weakness” and “In Judgement.”  Fans will absolutely revel in the new material that is so aggressive and brutal, yet manages to display a new level of maturity in song writing and lyrical content. Gregor tells the Metal Evangelist: “I write all the lyrics, [and] I don’t have to sing about things I don’t know about.  I really wanted to be very personal, [and I’m] one of those guys who write about what I’m going through.  [I want to] relate to other people, and my lyrics are about pain.  And everybody can relate to pain on some level.  The song “Hating Life” is about the struggles we all go through on a daily basis.”


Directly supporting Morta Skuld will be Invidiosus, a group who have never placed limits on how far they can go – whether it’s the speed of their songs or the distance they travel.  Invidiosus have done extensive touring, set up completely on their own, across the Unites States and even South America.  Their music is an aural assault of technical speed and precision that is juxtaposed with beautifully melodic passages.

Fail to Decay hail from southern Minnesota and have spent the last 8 years honing their style of down-tuned deathcore into a sound that is brutal and ethereally eerie.

Finally, Murder In The House of God will open the show with their progressive take on extreme metal.

Thanks to wintery MN roads claiming the assigned Photographer’s car as victim, I found myself rushing to First Avenue to fill in for her. How rushed? I committed the one sin I tell new photographers […]