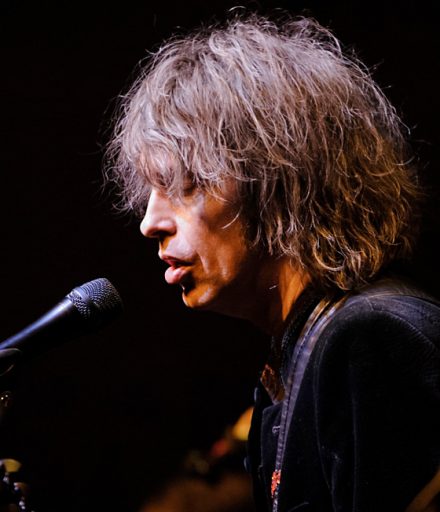 One of the finest rock and roll bands to ever emerge from the rich Celtic rock scene will visit the Twin Cities for the first time since 2015.  Mike Scott, along with his current line up of The Waterboys, is on tour presenting the band’s latest offering Where The Action Is.  The Varsity Theater in Dinkytown is a wonderful choice of venues.  Tickets and details can be found HERE.

The term “mercurial” is often been applied to Scottish born Mike Scott.  The music of The Waterboys, as well as that of Scott’s solo career, is a wonder of breadth, fire, spirituality and sheer rock and roll fun.  Picking up a new Waterboys’ album is akin to what we always felt when buying a new Bowie album.  You never knew what you were going to hear.  All you can expect is something new and challenging.  Scott is an intellectual and spiritual wanderer.  He never employs the same formula from one album to the next.

Mojo magazine describes Where The Action Is as: “joyous…audacious..miraculous”.  The band’s discography is littered with descriptions of this nature.  Best of all, their live performances are legendary.  The last trip to town, in support of Modern Blues, was in this reviewer’s opinion, the show of the year.  Expect plenty from the new album as well as an eclectic collection of offering from the past 40 plus years.

Long time fans count the days between Twin Cities appearances.  For the uninitiated, this show is a can’t miss.  The band’s range, appeal and passion connects them with an uncommonly large cross section of music goers.  If tickets can be had and you have the night free, The Waterboys at the Varsity Theater promises to be one of the best shows of the season.  HIGHLY RECOMMENDED!

As Spring is clearly in the air, there is nothing better than midweek concerts in downtown Minneapolis. The Neu Industrial band Filter made a stop at Mill City Nights for an evening of intense, in […]