The only thing that can dampen a great festival is the damp! Winona feels like summer in San Francisco. This year’s rendition of Midwest Music Fest has been geared toward the hearty. Then again, it is still April in Minnesota. By no means a wash out. But there’s been some scrambling to move acts inside and out of the elements. For those who came prepared, with Gortex and layers, MWMF has again offered up a bushel of busy charms.
I love the drive coming down the Mississippi at this time of year. It may not be green yet. However, for those who love the great outdoors, this major US flyway is chock full of migrating birds and nesting eagles. So I planned plenty of time to make the drive in a leisurely fashion.
It’s fun getting onsite a bit early. Watching volunteers still setting up and getting organized. There’s a palpable bit of anticipation. Lots of glances at the radar loop and prognostications. Meeting up with friends. Seeing the bands check in. Street clothes. Can these really be the budding rock stars we’ll see under the lights shortly? They look just like us.
And that’s one of the appeals of MWMF. It’s a music community homecoming of sorts. A wonderful mix of artists, pure fans and volunteers. It takes all kinds to make a family. 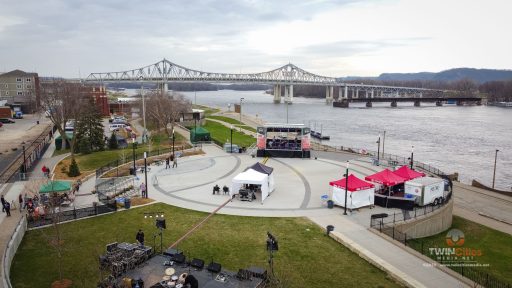 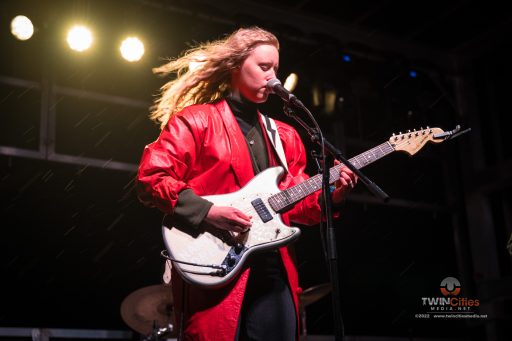 You could tell that the mood was beginning to shift to an indoor kind of vibe. People were getting chilly. So I figured if I was going to try to get into No Name Bar for some acts later in the evening, I better get there before I ended up being one of those waiting on the street.
First, however, a quick swing down to Island City Brewing where Mae Simpson was holding court with her big, bawdy 7-piece band. I’ve written extensively about Mae, previously. I think she’s one of the real up and coming bands in the area. Hard to believe this bunch came together just 4 years ago. There’s a lot of polish and the catalog now allows the band to go the distance. I love the fact that a band can nearly move you to tears with simple little ditties like Monsters. And then break stuff to pieces as they funk you up with saturated horns and percussion.
Kiss The Tiger moved from the Levee complex over to No Name Bar. Doubtless, a lot of folks planned on catching them, so I wasn’t surprised when I walked up to find a line that stretched a block. Thankfully, I rode the coattails of a couple musicians past the line and in. From the cold and damp to something more akin to a sauna. KTT and Meaghan Kreider were turning up the heat.
Since I had The Shackletons down as the last band of the evening, I figured it made sense to stay right where I was. Hearts To Gold was another band with whom I was not familiar. Getting sandwiched between Kiss The Tiger and The Shackletons is asking a lot. But the band was loud, fun and barged down the rock and roll highway.
As a testament to how well the folks at No Name handled their business, I looked up to see The Shackletons locked and loaded 15 minutes before their published start time. When was the last time you were in a venue with 7 or 8 young bands in the line up and things didn’t fall badly behind schedule? Nice job, guys!
Some bands fit a particular venue like hand in glove. The Shacks and No Name are one of those match ups. Colin Campbell mentioned that starting an East Coast tour in those packed four walls was as good as it gets. He said it felt like their bar. And everybody got to share it. Sweat flew, folks danced and by the end of the set I, like most people at MWMF, was wrung out.
When I hit the sheets I was physically exhausted. Lots of walking, outside elements and dancing will do that to you. But there’s still a day to go. Day 1 of Midwest Music Fest was a whirlwind. It was a challenge. And there was more good music to discover than one person could possibly explore.

After getting this weekend completely off from live music due to a bit of a hiccup in a previous engagement, I honestly thought about trying to go the entire weekend without a live show and […]

Once again it was an eventful Friday evening for music in the Twin Cities, but perhaps one of the most anticipated shows of the weekend was a sold-out Léon and Jacob Banks show at 7th […]