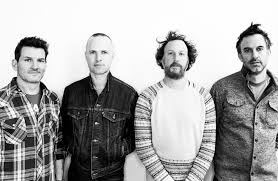 Fun loving Guster, on the road with their “Look Alive Tour Of Most Of America & Parts Of Canada”, will be hitting the First Avenue Mainroom on Saturday night, February 9th. They are out supporting their latest release “Look Alive”

Look Alive is our 8th album. The bulk of it was recorded in a vintage keyboard museum in Calgary AB, during a January stretch when the temperature reached 30 degrees below zero. We ended up in Canada because our British producer, Leo Abrahams, couldn’t turn around an American work visa fast enough, and we feel lucky to have discovered Studio Bell at the last minute. Despite having access to room after room of well-maintained analog keys, Leo gravitated to a cheap Ensoniq Mirage synth from the 1980’s that made Janet Jackson Rhythm Nation-era sounds from floppy disks.

Leo spent countless hours poring over these floppy disks while the band gawked at the mellotrons, harpsichords, and other vintage equipment housed at Studio Bell. It was the beginnings of a stylistic clash that would ultimately play out beautifully. Our band had always gravitated to “warm” sounds. Leo would introduce us to “cold” sounds and the way they challenge us as listeners. He was the perfect complementary piece for Guster. After working with the late Richard Swift four years ago and discovering a more raw and vintage sound on Evermotion, we fully embraced studio production with Leo this time around. The sheer amount of production on Look Alive grew into its own statement. There is a lot to unpack.