According to legend (well, the internet) Little Dragon’s band name was inspired by singer Yukimi Nagano’s temper during their recording sessions. Her passion was certainly visible on stage when the Swedish band performed at First Avenue. The audience was clearly there to have a good time and Little Dragon delivered.

Hailing from Gothenberg, Sweden, the band features Erik Boden (drums), Frerdick Kallgren (bass), Hakan Wirenstrand (keyboards) and Yukimi Nagano on vocals. Their music is difficult to categorize. It has elements of soul, R&B, pop, and electronica to name a few. Instrumentation consists of two synths and percussion, their sound shows it’s heritage in the electronic realm. Yumiki’s mike and vocals took a bit of adjusting during the first song. Once fixed her remarkable range, had no trouble rising over the band’s dense sound. 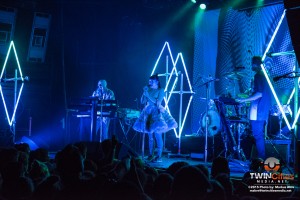 Little Dragon entrance teased the audience. After the curtain (screen) went up the stage was dimly lit with an instrumental piece playing. The crowd got quite excited as lights kept sweeping the stage as if to show the band coming on stage. Once on stage, Little Dragon kicked off with “Killing Me”. Being constrained by stationary instruments did not hinder band interaction.  Yukimi joined Hakan at his keyboard and in turn spent some quality time sharing the drum kit with drummer Erik. Of course Nagano performed the mandatory First Ave shout out to Prince.
Set List:
Killing Me
Little Man
Pretty Girls
Cat Rider
Summertearz
Constant / Brush / Wink
My Step
Shuffle A Dream
Blinking Pigs
Only One
Klapp Klapp
Encore
Nightlight / Turn Left
Ritual Union
Twice

Imagine Dragons Bring The Thunder and Lightning to The Target Center

I’ll be honest, it was hard to watch my friends and boyfriend pull out of my driveway with their destination being bingo at a local dive bar. I love bingo and dive bars but I […]

Take a moment and consider what it would be like to experience a dark, twisted carnival. Think of what you would see. Now add in an entrancing heavy metal and toss in a bit of […]