After spending some time in Chicago for Riot Fest, it felt great to get back to the grind and walk the familiar path from the parking ramp to First Avenue/ 7th Street Entry in Minneapolis on Wednesday night to see Lawrence. I had no clue about any of the band playing, but I knew going to a show would bring back a sense of normalcy to my life that was much needed after my bender of a weekend.

The show kicked off with singer/ songwriter Victoria Canal and I was instantly captivated. Her music was slow and somber but there was an undeniable sense of joy that radiated from her and the stage as her voice danced through a quick opening set. Although there was a sense of darkness and sadness with every word she sang, there was also a sense of energy that made you fall deeper and deeper in love with her music with every passing note. Although referencing to herself as the “soft cheese” of the night, it was clear that I wasn’t the only one that had been captivated by her voice and energy. In-between songs, you could hear a pin drop in the audience. Other than a polite applause that followed each track, it was dead silent but a comfortable kind of silence. Sure, Victoria was on stage performing for all of us and will continue her trek across the country but, in that moment last night at the 7th Street Entry, she was one of us. She came off as a friend and someone you could talk to. You felt her love for people in general as she talked about mental health and being content with who you are and staying true to it. Her offering of free hugs was just the icing on the cake. Sometimes you see someone who just has it. You can’t explain what exactly “it” is or how they have it but you just feel it. I felt it with Victoria Canal and I can’t wait to see where she goes! 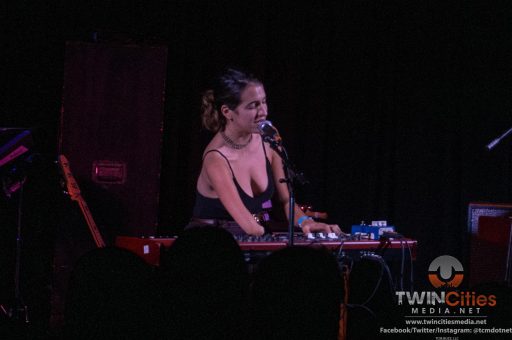 Set changeovers were quick and it seemed like Joe Hertler & The Rainbow Seekers were onstage and ready to go before Victoria’s final note even cleared the air. The second Joe Hertler grasped the microphone and welcomed the crowd I knew I was in for something different. A stark difference from Victoria’s quiet and emotional set, Joe Hertler and his band of brothers jumped into a set full of music that made you want to dance and a smile that was nothing short of infectious. With four albums out, this Michigan based group is not new to the scene and clearly not new to the nearly sold out audience. People were singing along to the obnoxiously (in a good way) upbeat songs. If you were unable to sing along, there was nothing to stop you from dancing along and there was something about Joe’s smile that made whatever geeky dance you were doing feel comfortable.

Each member had a different vibe about them. The bass player had on a mock spacesuit, one of the horn players looked a bit like Indiana Jones, and Joe had on a beautiful (probably homemade) rainbow cape thing that looked like fabric feathers. I think those descriptions would be the best way to describe this band’s sound but I also realize that their looks have nothing to do with the sound at all. There was funk, jazz, rock, indie, country…. hell, these guys were all over the map and you could tell that, like with the outfits, each member brought something to the table when it came to their music creating a truly unique sound and experience. If Joe Hertler & The Rainbow’s Seeker set didn’t wake you up and give you a second wind, I don’t know if anything would. As the music faded out and the stage was quickly switched over for the headliner, I couldn’t help but notice the giant grin that had yet to leave my face. 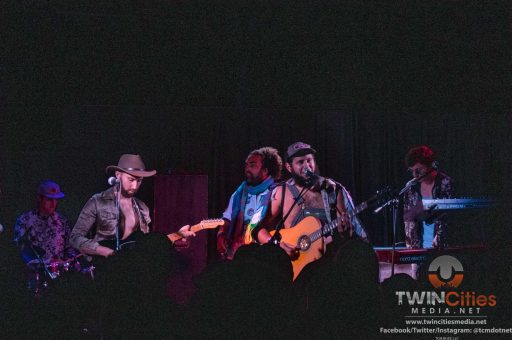 Closing out the already perfect night of music was the one and only Lawrence. I’m not sure what I was expecting but judging on how the earlier portion of the night had gone, I had no expectations other than the fact that I was going to have a great time. My brother had been waiting for this show for weeks and he leaned over to me just before the band started and asked if I had checked Lawrence out. I shook my head and an evil grin took over his face. He knew something I didn’t and I was scared yet excited to figure out just what that something was. The eight piece band crowded onto the stage and kicked into their closing set full of soul-pop sounds that were unlike anything I had ever heard before. Fronted by the brother/ sister duo of Clyde and Gracie Lawrence, within the first song I had completely forgotten about my exhaustion or the fact that it was only Wednesday and had swapped out my boots for dancing shoes. Much like Joe Hertler & The Rainbow Seeker’s set, there was something obnoxiously infectious about the music of Lawrence. Love the sound or not, it made you want to move and made a smile creep across your face even if you were having the worst of days.

Lawrence may be a fairly new band in the grand scheme of things but they are clearly catching on like wildfire. The entire audience was singing along to all of their songs both old and new. It felt like I was at a family reunion between songs and bands what with the way people were hugging and cheersing their drinks. It was the perfect atmosphere to get completely lost in and to find that sense of normalcy I had been searching for. Sure, maybe I didn’t know anything about the acts that were playing (and I was apparently the only one in that boat) but maybe that’s exactly what I needed to get back into the swing of things.

Stumble into a show you know nothing about. Switch out your boots for dancing shoes and let that smile creep across your face. I promise you’ll end up loving every minute of it.

The Posies Celebrate 30 Years at The Turf Club

Founding Posies founder Ken Stringfellow granted TCM the time to answer a wide range of questions and to reflect on a remarkable career that shows no signs of slowing down.  The band is currently embarked […]

Reignwolf Takes Over The Turf Club 10/6

Jordan Cook, also known by his stage/band name of Reignwolf, has been making thunderous waves in the blues and rock scene since he was old enough to pick up a guitar and sing. Cook comes […]

New Primals Release Show This Friday at 7pm! Tune In.

This shutdown has turned the Twin Cities and the rest of the world upside down. Musicians and artists are among those having their livelihood taken away from them. Tours are cancelled, venues are shut down. […]