You know those shows that you will do just about anything to see? Those kind of shows you wake up stoked out of your mind to see later that night… the special type of show that sits in the back of your brain for days on end like an eager puppy waiting for you to let it out and run free? Whether it be traveling, waiting in line hours before the show starts, or getting off of work early, I think any avid concert goer understands that sometimes making it to the punk rock show is something set out only for the tried and true. This was the case for me on Sunday night when Laura Jane Grace & The Devouring Mothers rolled into town to play a SOLD OUT Turf Club show with Mercy Union and Control Top.

I bring up the sentiment of being a tried and true music fan because my journey to get to the Turf Club was not a simple one. However, this was a show I was not going to miss. I had spent the last six days in Washington D.C for an academic conference, and was feeling pretty mentally and physically fatigued. I woke up at 5:00am Sunday morning so I could hop on a plane and make it back to Minneapolis well before the fun at the Turf began. Traveling can be taxing. And I feel like after any busy travel day (or week for that matter), the regular, more passive concert goer may have called it a night early to catch up on some much-needed sleep before jumping right back into the work week. But I was not going down that easy. I was going to be ready.

The Twin Cities were alive Sunday night. The festivities of the Final Four were in full swing and the masses had flocked into the state just as I had that day. While most eyes were focused on Minneapolis, my attention was directed east towards the twin city of St. Paul where Laura Jane Grace & The Devouring Mothers were attempting to rival the liveliness of the Final Four in front of a sold out house at the Turf.

When I arrived at the Turf, I was greeted by the sight and sound of opening band Control Top taking the stage. Without knowing anything about the band heading into their set, I felt like I was quickly sucked in and captivated by their music and stage presence. Control Top offered in your face, female fronted power-punk. With fuzzy distortion and loud vocals, they sounded like the B-52’s punk rock cousin who had come kick your ass and take your name. Their energy was infectious. Lead vocalist and bassist Ali Carter came out unapologetic, seemingly on a mission. This was an opener the audience was not going to forget about. I completely dug their set and look forward to checking Control Top out more. 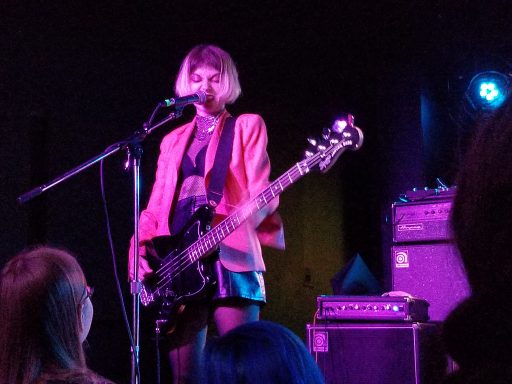 The next opener was Mercy Union. Mercy Union’s sound was drastically different from Control Top’s. Offering a more laid back, rock and roll sound, the lead singer’s voice and style instantly reminded me of Brian Fallon of The Gaslight Anthem. Or I guess I should say Springsteen, since the band hails from New Jersey. Mercy Union was full, tight, and sonically rich. While watching them play, I couldn’t help but get a smile on my face. There was something very positive and communal about them, and by judging the faces in the audience, I wasn’t the only one feeling that way. Mercy Union are another band I look forward to keeping tabs on in the future and hope to see when they roll into town again. 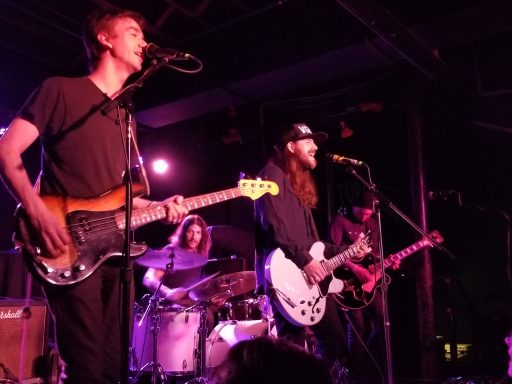 After two strong opening acts, I was feeling incredibly stoked for the main set — Laura Jane Grace & The Devouring Mothers. Laura Jane Grace has slowly melded herself into being a personal favorite singer-songwriter of mine. Her album Bought to Rot with the Devouring Mothers features a fresh sound unlike anything Against Me! has ever released. I was definitely excited to hear songs from the album performed live and with a full band.

There was a heavy buzz generating throughout the room as the band begun to set up their gear. I felt like the intimate 350 capacity Turf Club was full of true die-hard fans who were all stoked to be there. When Laura Jane Grace & The Devouring Mothers started to play, the crowd erupted in smiles and applause.

The band came out as a force and were incredibly tight. I was immediately captivated by the energy and precision radiating off of drummer Atom Willard, who had such a powerful sound with intricate drum fills. He was amazing to watch. It was also hard not to be immediately captivated watching Laura Jane Grace on stage. Her voice is so strong, and the way she performs on stage is mesmerizing. While she is a great musician and guitarist, she is also a great front-woman — engaging with the audience and making jokes. She has an infectious charisma on stage that makes everyone in the room feel welcome. 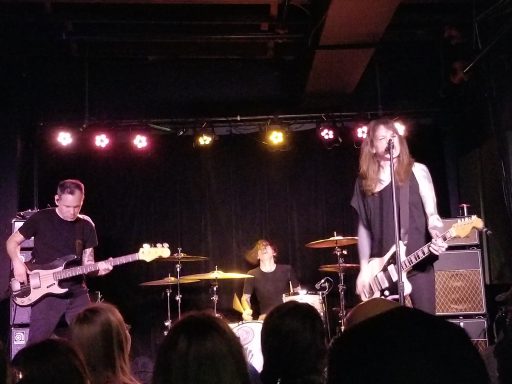 Laura & The Devouring Mothers cruised through a packed set, including a few Against Me! songs and Mountain Goats covers. The best songs of the night were from her album Bought to Rot. One of my favorites of the night was “I Hate Chicago”, to which Grace prefaced the song by telling the audience “a deep-dish pizza is a casserole, NOT a pizza!” Everyone cheered.

After rolling through multiple songs from Bought to Rot, Laura went into a cover of The Replacements “Androgynous.” Watching this song performed live almost brought tears to my eyes. It was such a wonderful moment seeing the true trans soul rebel creating such a powerful and heartfelt moment on stage. I think it’s also appropriate that any punk lover/musician pays homage to The Replacements while in the Twin Cities. I loved every second of it.

As the main set wrapped up, the audience belted out for more. I was completely floored when Grace came out and played a cover of Camper Van Beethoven’s “Take the Skinheads Bowling.” This was another fantastic cover. The encore ended with Laura being the only one left on stage with an acoustic guitar. She played Against Me!’s “True Trans Soul Rebel”. This was easily my favorite moment of the night, because the crowd sang every single word loud and passionately back to Grace as she played. I felt as if everyone in the audience came together in that moment.

After Sunday night’s show, I can confidently say that rebel punk is alive and well. With fresh, upcoming talent like Control Top and Mercy Union taking the reins and continuing the fight, the scene is in good hands. The community we build and sustain around this music is a special one. There is solace in sharing a space with so many like-minded people, and Sunday’s show was a reminder of how great the punk community can be. I am so glad I made the trek home for this show at the Turf. Mark it down as one for the books.

People looking for a great rock show in Minnesota need not look any further than their own state!  There are many talented bands to choose from and Saturday, July 8th brought 3 of those bands […]

Jinjer was at the Turf Club on Sunday night and I wouldn’t be surprised if there were several large, new holes in the walls of the beer hall. The moshers were very active, along with […]

Ghost Packs The Armory With An Incredible Sold Out Performance

October 5th might be a tad early to get into full Halloween mode, but don’t tell that to the Ghost faithful that packed the Minneapolis Armory on Saturday night for the 93x Haunting Featuring Ghost. […]