For all the wild stories we hear about Florida and the things done to gators, motorized scooters and mobile homes, there is a certain charm to the “simple life” in the rural parts of the state. And let’s face it, the mosquitoes can’t be any worse than in Minnesota.

Hailing from Mount Dora, FL Laney Jones and her band the Spirits rolled through town supporting her album “Golden Road” and her new single “Work it out” stopping at the Aster Cafe in Northeast Minneapolis. Jones’ voice has been described as “a mix of lemon, molasses, gin and gunpowder”. I found myself in agreement during her sound check rendition of the “ABC song” – yes the one you learned in Kindergarten. 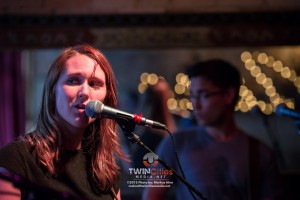 Once the actual show started, her sound was quite removed from early childhood days. The first song “Broken Hearts” featured her on the banjo and harmonica and was smooth and soothing. Things got more lively with “Devil Down”, a song dedicated to her mother. A very Florida moment was the story of the song about an 11 foot Alligator and 5 missing goats from her farm, aptly titled “Midnight Snack”.
Laney Jones’ is a firecracker on stage. She and her band did not let the small venue impact their show. It was easy to see why critics and other artists have become fans. Their tour of the US continued through early September. Tour dates are here

Most Minnesota moment: When Laney mentioned that this was her first time playing in Minnesota the response came (sounding like someone’s Norwegian Grandma) “Oh! Welcome!

The Violent Femmes have been playing shows for years, so as a twenty something seeing them for the first time, I wasn’t sure what to expect. I knew the epic artists behind “Blister in the […]

Let’s begin with a confession.  I offered another TCM writer $20 to take this show for me.  The day began over 400 miles and a long car ride away from the 7th Street Entry.  The […]