Now that was different!  I had a lot of questions in the run up to Kraftwerk’s stop at The State.  Many were echoed by friends who knew I was coming to the show.

-Beyond Autobahn, was I familiar with any other songs?

–Autobahn exploded onto the scene over 50 years ago.  Was this going to just be another nostalgia trip?

-What the hell was a one hit wonder band doing with a slot in the Rock and Roll Hall of Fame?

-What on earth was I doing showing up at a Techno show.  I hate Techno.

Before the night was out, all those questions were answered in a positive manner.

As I walked out of the house on the way to the show, my wife chimed:  “There’s going to be a whole lot of dinosaurs.  You’ll fit right in.”  She was on the money with the latter prediction.  But walking into the theater, my first impression was that this was anything but an old audience.  Surprise number one.

Doing a bit of prep work prior to the show, I came to recognize how important the boys from Kling Klang Studios in Dusseldorf really were. They launched an entire genre of music that spilled in unexpected directions.  Kraftwerk was utterly original.  Without their work, there is no Bowie techno scene.  There’s no Devo.  You don’t even get to The Cars.  You’d still have discotheques rather than raves. That automated, mechanical groove was the gift they gave the scene.  If you believe that an induction into the Hall should be more about influence and impact than records sold (which I certainly do), Kraftwerk should have been there in their first nomination, not the seventh.

Nostalgia trip?  Far from it.  Last nights show rivals any concert I’ve ever seen in terms of sheer production value.  I can’t say that any particular song jumped out at me.  Kraftwerk is not about songs.  The entire show jumped out at me.  Literally.

The tour was called 3-D.  I admit that went right over my head initially.  I mean, how does one do a rock and roll show in 3-D?  When the usher handed me my very own 3-D glasses, I was actually surprised.  My friend Markus, who shot the photos for TCM, had mentioned to me that he’d run into some of the advance crew at a restaurant a couple days earlier.  A couple days earlier?

The venues run by the Hennepin Theater Trust are staffed by really talented tech crews.  They are used to staging Broadway shows.  However, when was the last time a band’s advance crew was working on the set up a couple days in advance?  That was the first clue this wasn’t a set it up, tear it down, move to tomorrow night’s city kind of show.  It would take days to prepare.

The stage is utterly bare.  A projection screen directly behind 4 identical control stations.  Each manned by a Teutonic cipher in CGI suit.  Inscrutable.  Still.  More android than human.  The show takes place on the screen as much as it does through the speakers.  In so many ways, the antithesis of a rock and roll show.

Kraftwerk has always worked that line between man and machine.  It’s as much an automated ship as it is a human orchestra.  Loud.  Relentless.  Repetitive and endlessly engaging.  The setlist more like the soundtrack to the movie.  And the movie jumps from the screen as 3-D images float over your head.  If you’d asked me if I could sit for 2 hours listening to electronic music, I’d have rolled my eyes and laughed.  Yet, there I was tapping my heel, rocking in my seat with a smile plastered on my face the entire time.

Utterly original and unique.  I give Kraftwerk huge kudos for continuing to push the boundaries.  For not simply repeating a formula they invented half a century earlier.  Instead, continuing to create new sounds and embracing technology in a manner nobody else can match.  The concert was chock full of moments that were simply amazing.

One of my favorites came during Autobahn as a vintage animated VW Beetle jousts with a big Mercedes.  We see it from all perspectives.  Sometimes from the driver’s seat, the road rushing to meet you while your rearview mirror shows the overtaking vehicle.  Sometimes from above.  Sometimes toward us.  An audience member was returning to his seat, walking down the aisle.  In my 3-D glasses, the Beetle soared right over his head.  I nearly jumped from my seat with joy.

In another sequence, the driver’s hand adjusts the radio.  Musical notes begin to spew forth.  Whizzing past my head.  Who comes up with this stuff?

I’ve seen my share of 3-D movies.  Done well, they can have a real impact on the experience.  The trick is to avoid the artifice.  To lull us into a new reality and make us forget that we’re “doing 3-D”.  Kraftwerk managed to do it for two hours.

There’s far too much to unpack here.  Suffice to say the entire show was mesmerizing and took me off guard.  It had a bit of that old First Avenue feel.  Remember those days the main screen was filled with strange, black and white film images dancing to whatever the DJ was playing?  In the days before it began to advertise upcoming shows?  The film was the choreography.  The music was the soundtrack.

And nowhere is there human presence.  That’s so unexpected.  Rock and roll always has a “look at me” aspect.  We watch our icons sweat, emote, play their instruments and strike their poses.  Not so Kraftwerk.  Everything is designed to make the audience look elsewhere.  The screen behind the consoles is the show.  The lights accenting the proscenium arch and artwork, simply gorgeous.  Pay no attention to the androids plugged into their consoles driving the space ship.

The third song in, Spacelab, placed us inside a ship orbiting the earth.  At one point we sail over North America.  A Google Maps pin pops up on the Twin Cities; tucked just left of the Great Lakes.  We bank and spiral down.  Flying straight up 35W toward downtown.  There appears The State Theater with Kraftwerk emblazoned on the marquee.  The ship settles down on Hennepin.  The audience roared approval.

Finally, did I know more songs than Autobahn?  Sure, I did.  Songs like Trans-Europe Express.  Hardcore fans knew many more, based on the spontaneous applause the accompanied opening notes.

Here’s the thing that seemed to flow from the entire experience…being a machine may have its advantages.  But it can also be lonely.  In the song The Man-Machine, words flow across the screen:

The final song from the encore set, The Robots intones it’s another lonely night.  The singer needs a rendevouz.  He’ll settle for a data date.  There’s something sad about that.  Every song with lyrics engages the intersection of man and machine.  Cars.  Trains.  Spacecraft. Tour de France Bicycles.  Nowhere is there a human emotion or experience.

Kraftwerk makes us look away from the 4 engineer/DJs in the band.  We look at what they create.  A Matrix.  It’s a different reality entirely.  This is no nostalgia trip of great old songs.  It has nothing to do with songs from some new album.  Instead, it’s about what they’ve always done.  Explore that grey world between man and machine.  Where every note is machine modified.  Where every note is human created.  Heading down that reverberating rabbit hole for hours on end.

Utterly unique.  Fascinating.  And worth every minute of it. 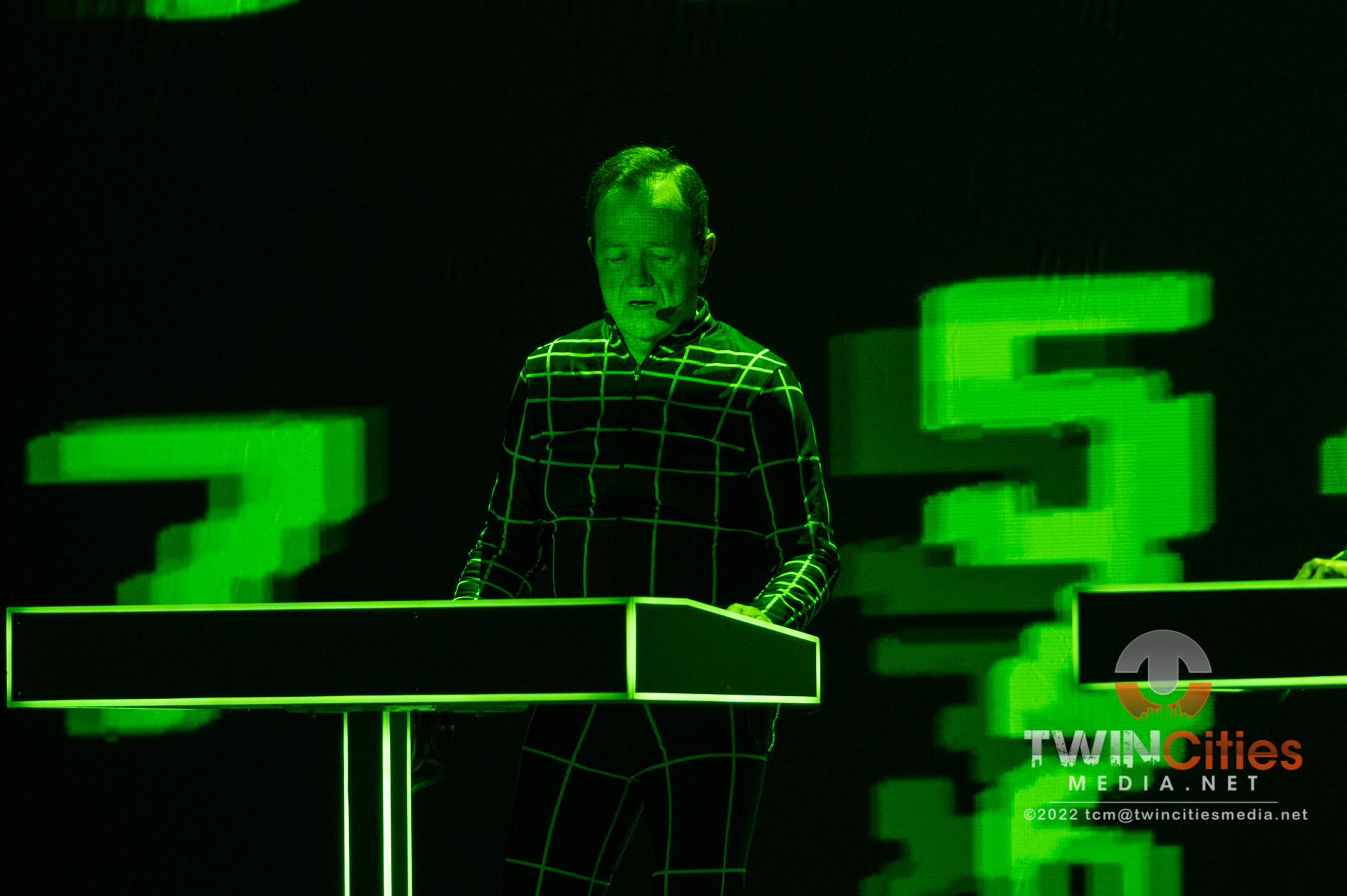 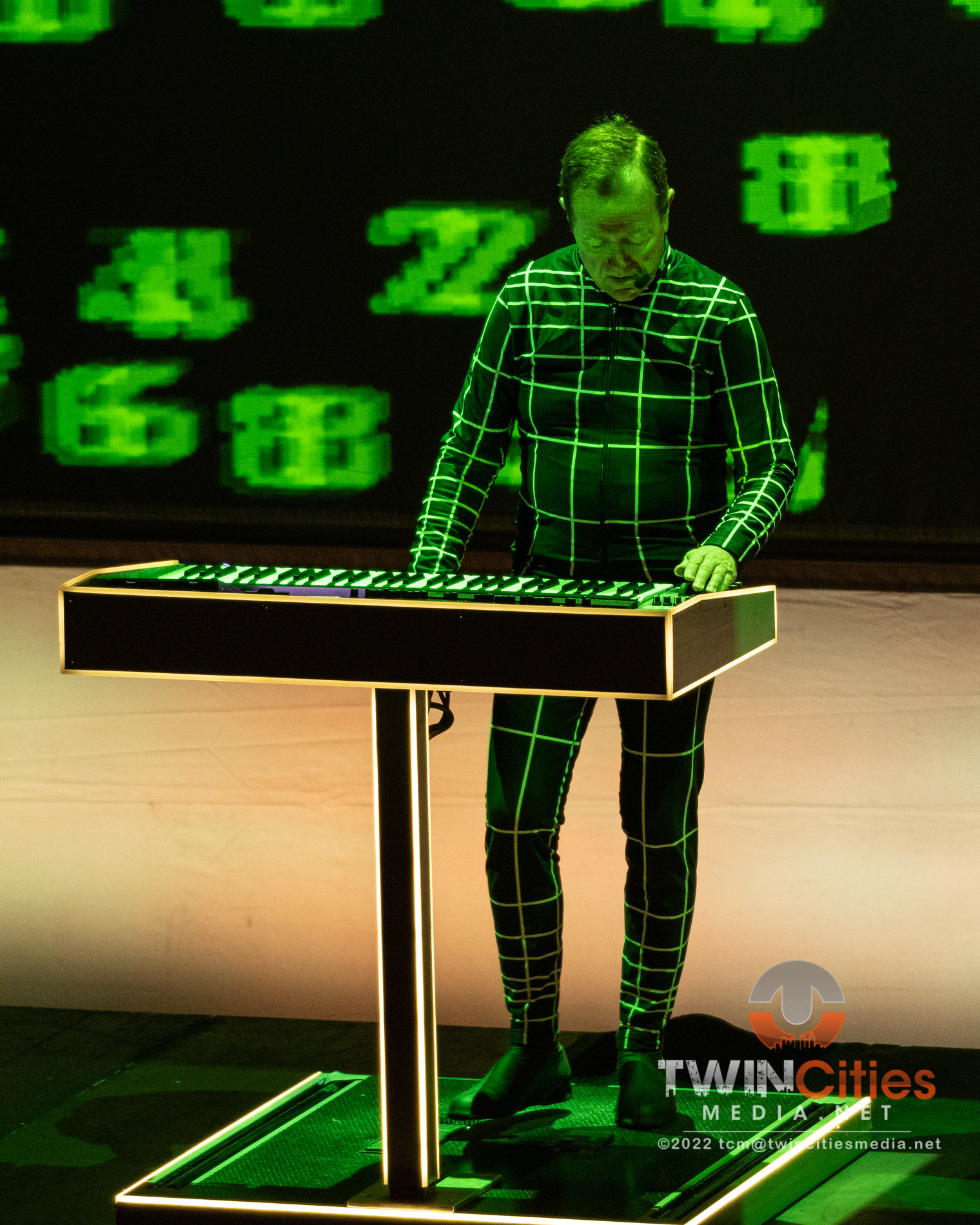 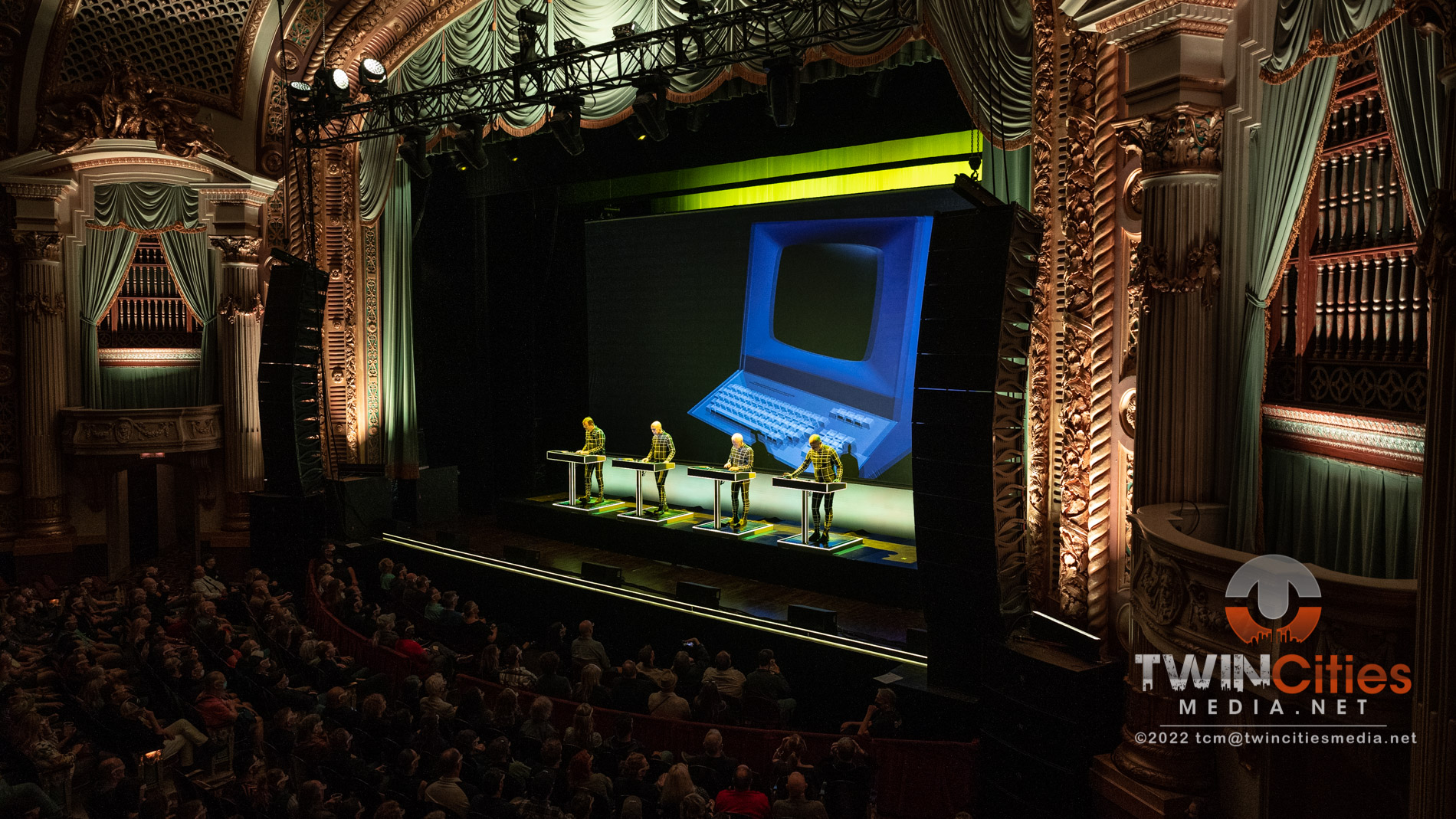 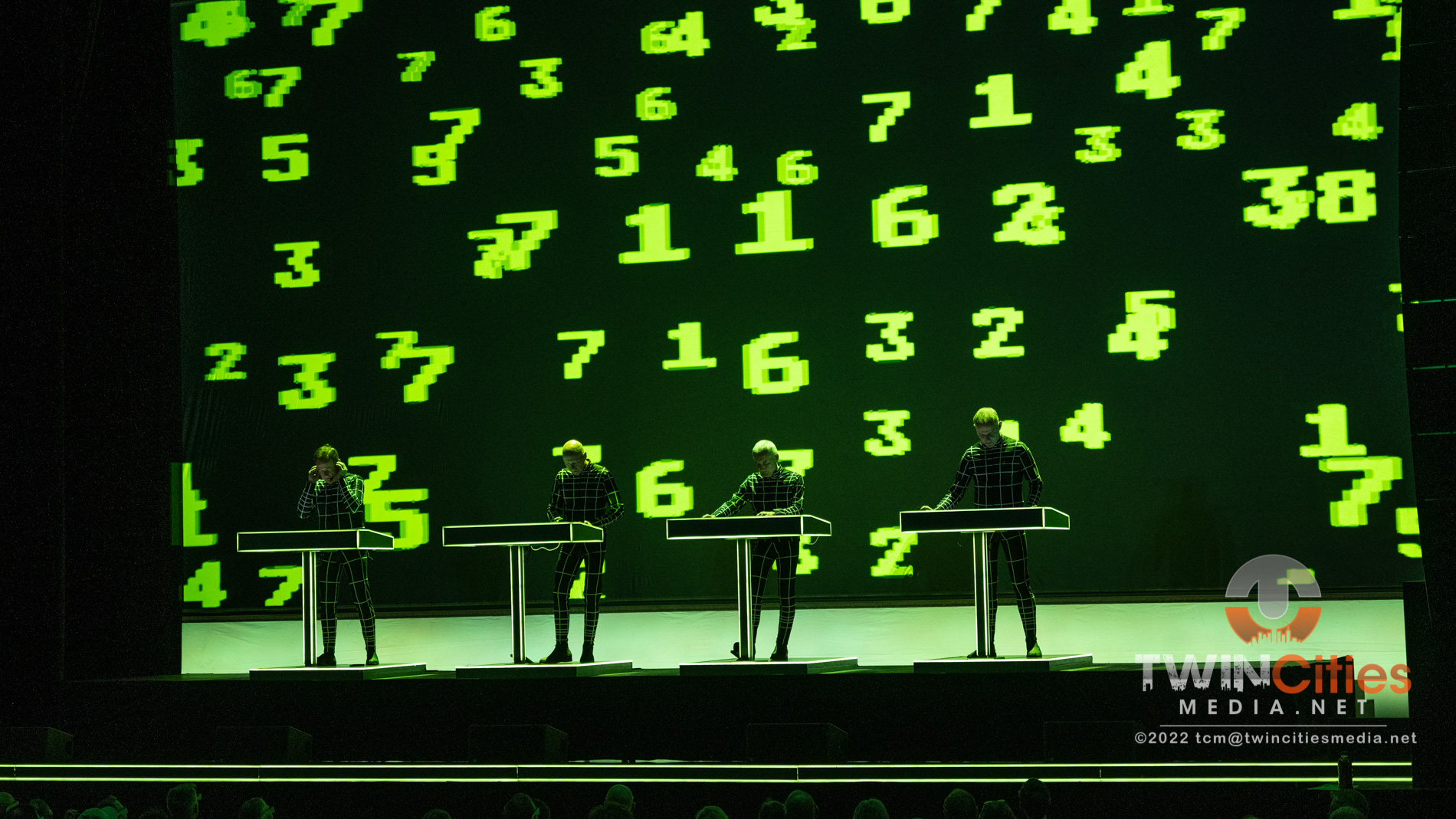 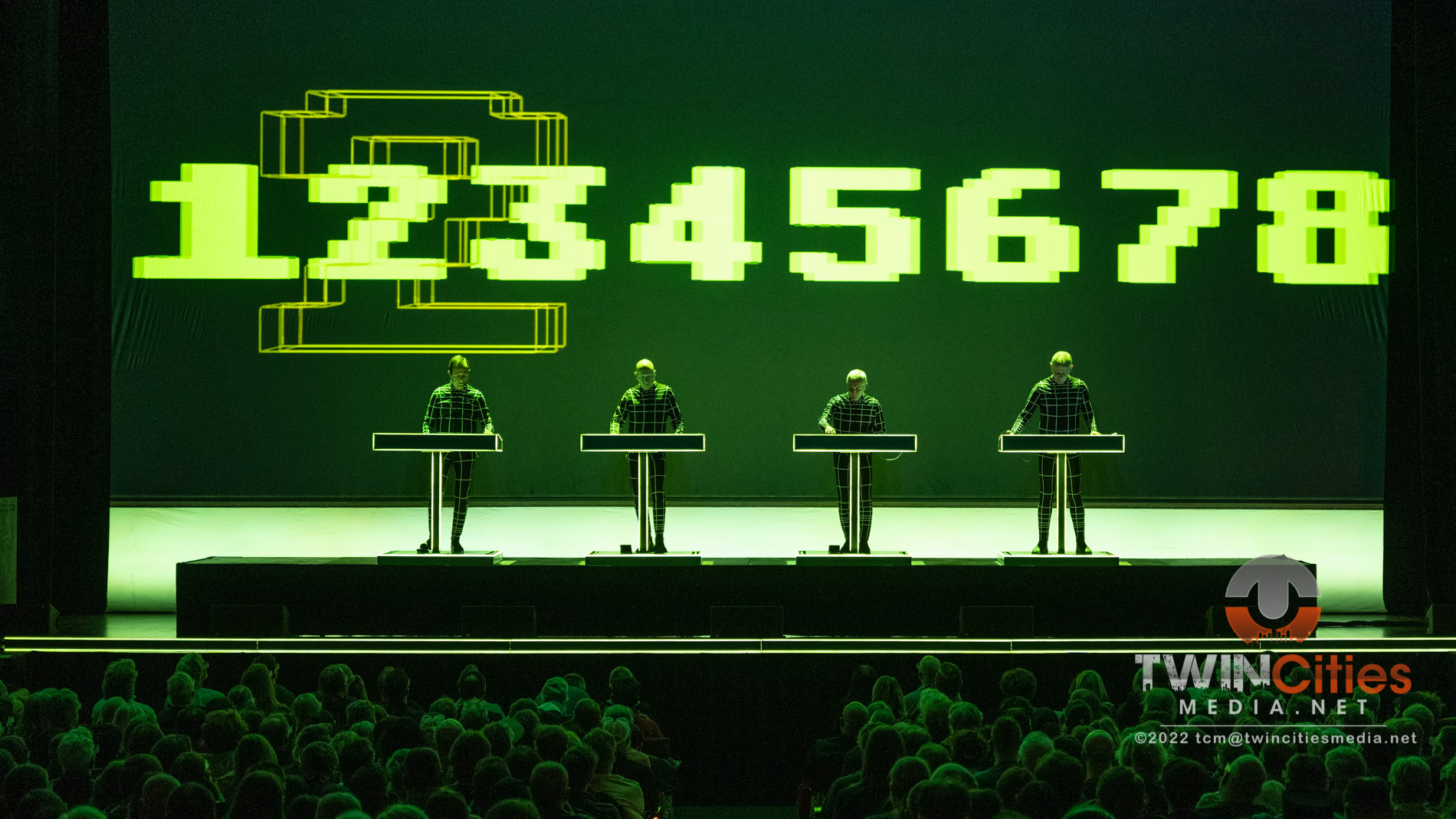 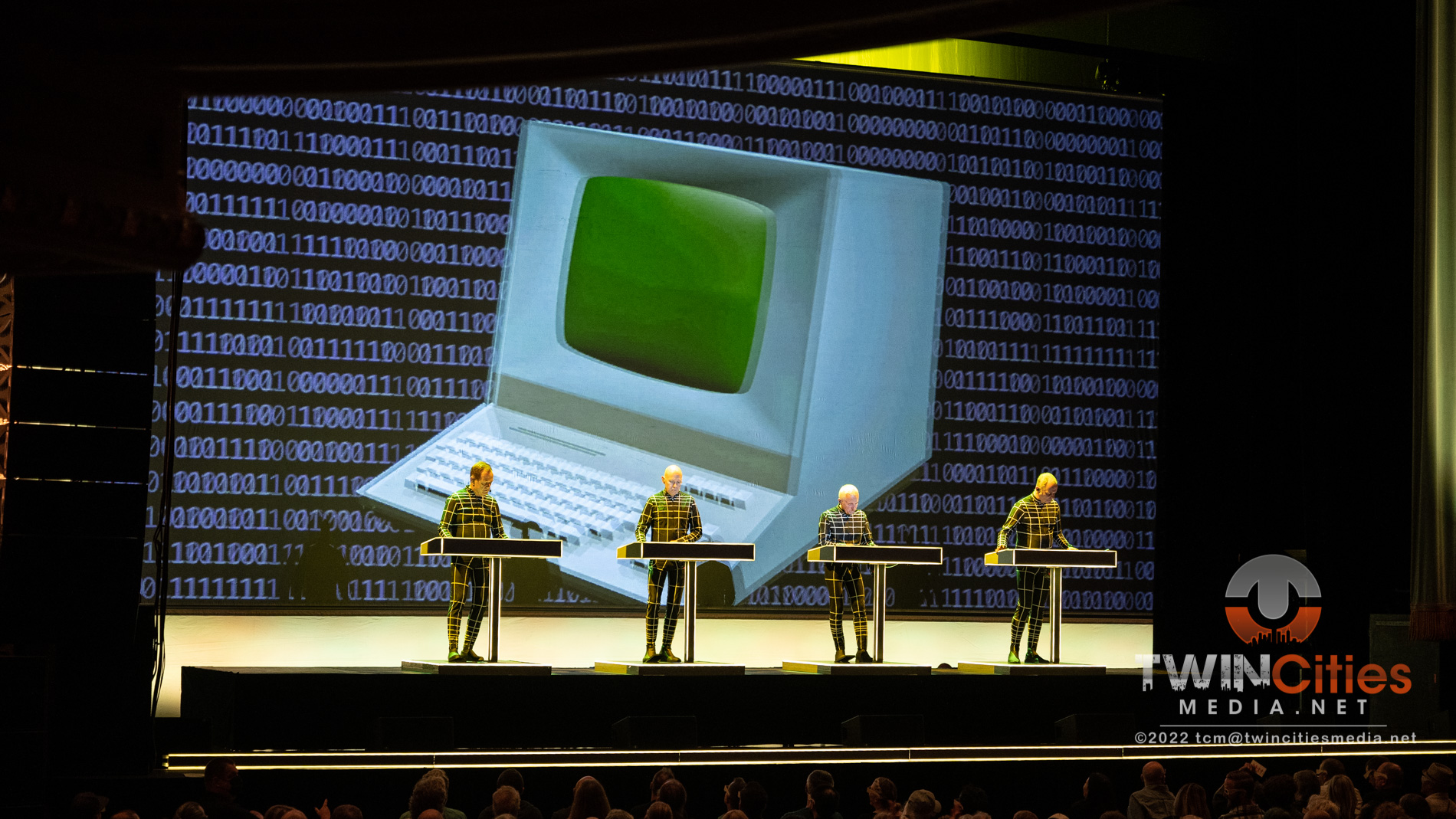 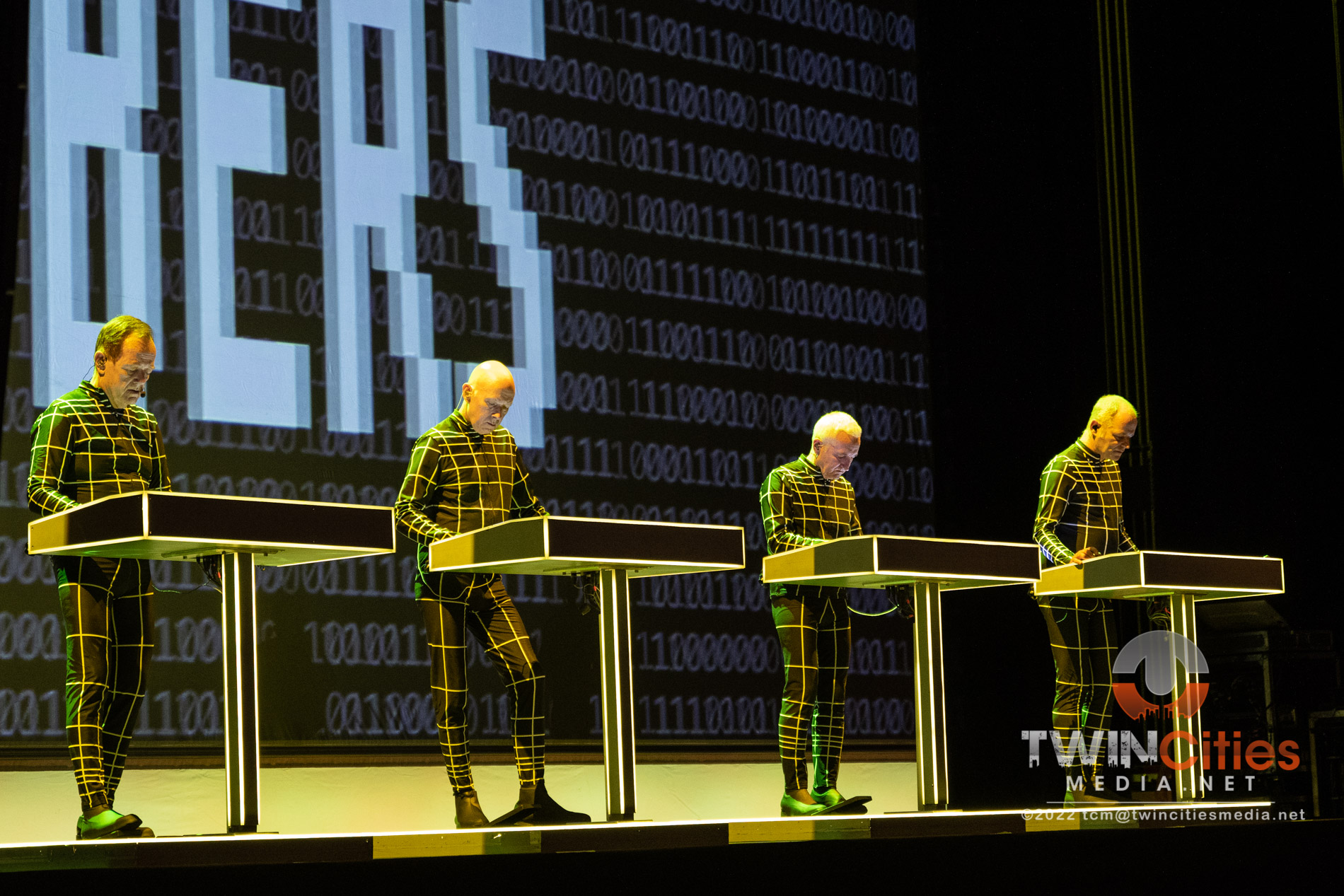 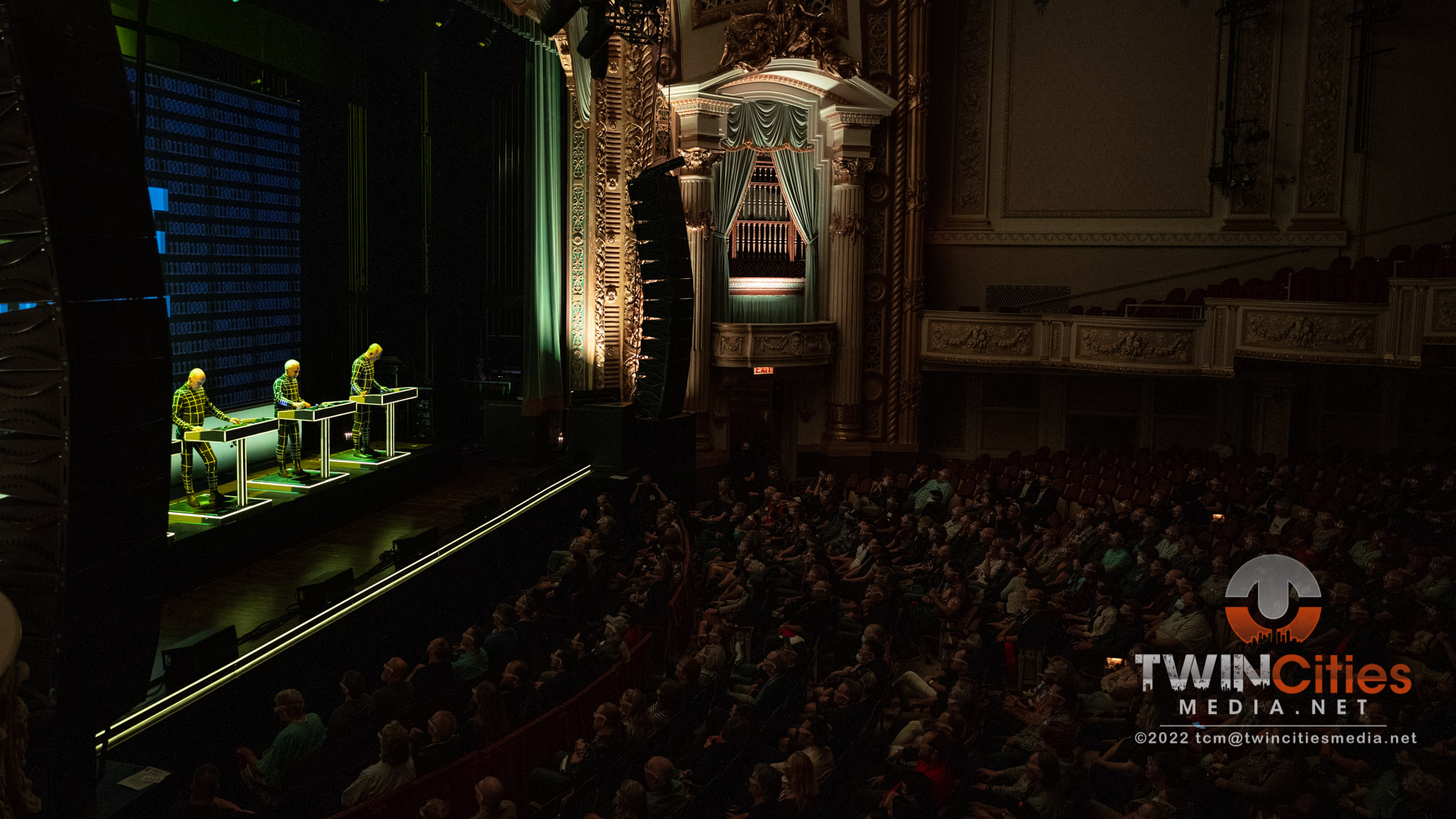 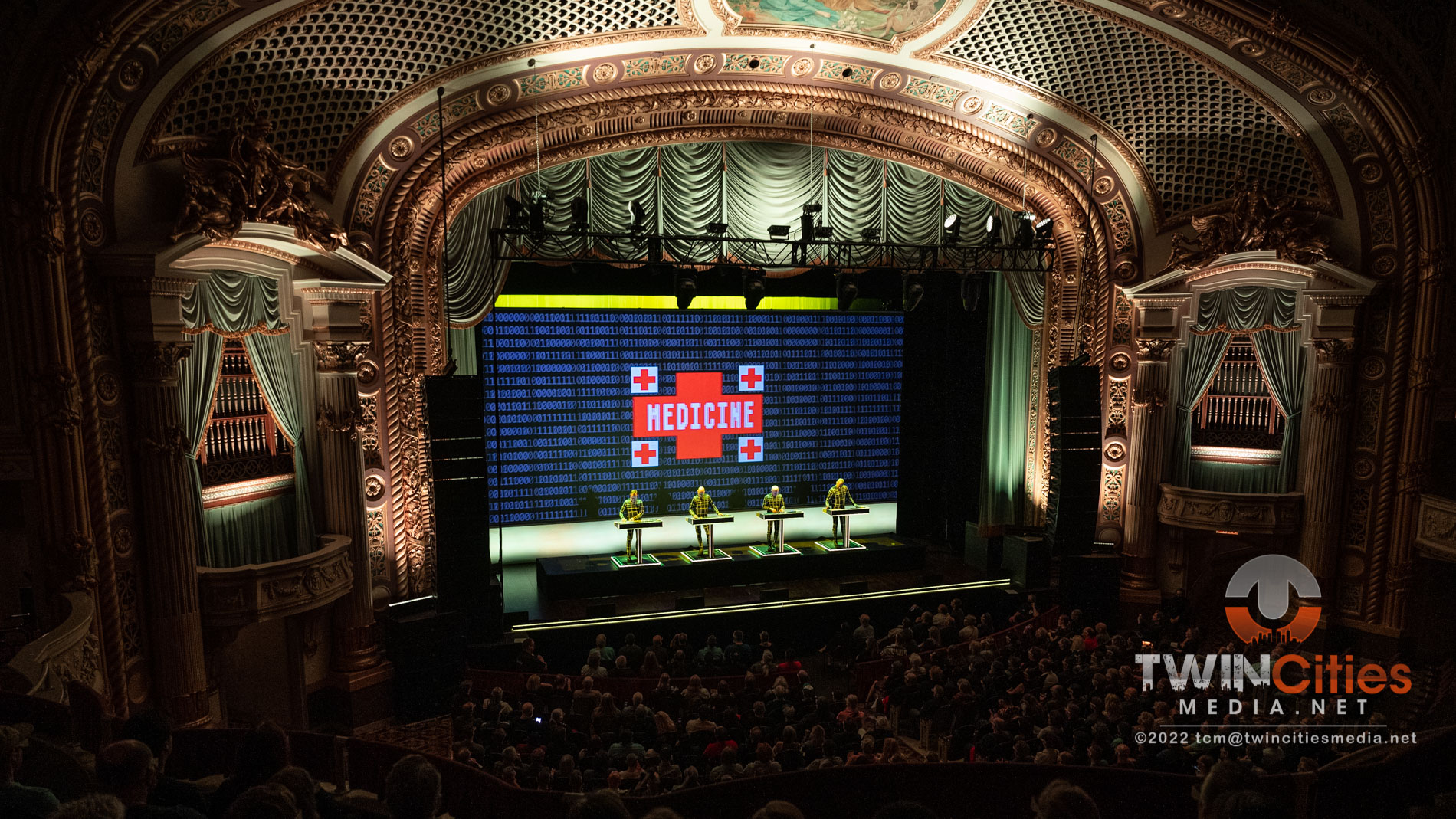 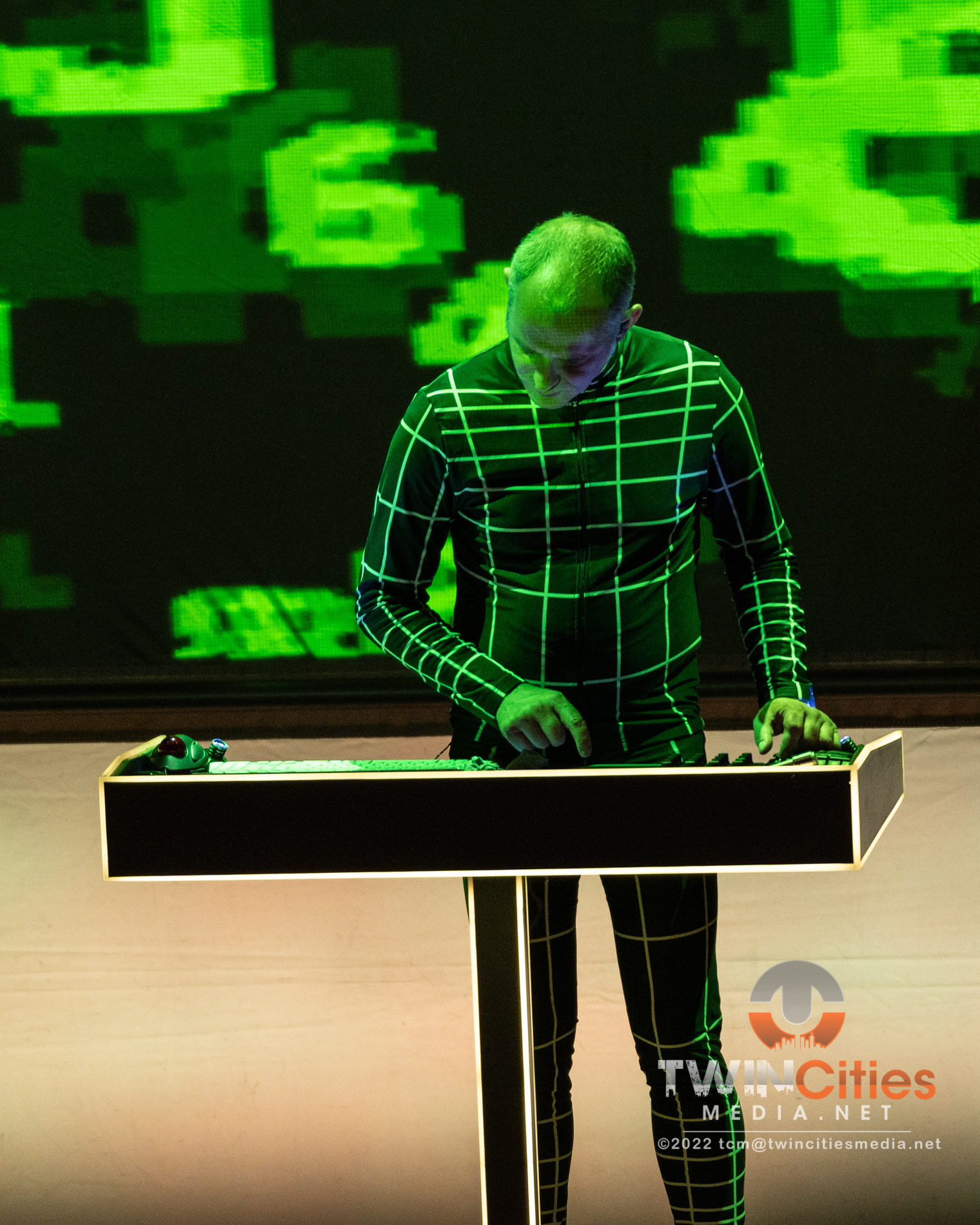 Enter Shikari Warm Up A Chilly Tuesday at The Varsity

Things have been insane. From Riot Fest to a wedding over the weekend, I’ve been feeling like I just can’t get above water. I know that I need to buckle down and just get caught […]

As the weather starts to change throughout Minnesota, the temp is certainly heating up in the local country rock music scene. Neisen’s Sports Bar & Grill in Savage, MN was the place to be Saturday […]