Canadian 5 piece band July Talk brought their unique and mesmerizing live show to the Triple Rock in Minneapolis Saturday Night. The band is about midway through a North American tour and was happy to be back North after spending some time in the summer heat of Texas.
Starting with “Blood&Honey” July Talk pulled in the crowd with the chemistry and interaction between singers Peter Dreimanis and Leah Fay. The ambiance suffered a tiny bit from the lighting with Fay being in dark red light most of the time while Dreimanis was in bright white. As I photographer, I may have gotten spoiled by the brilliantly lit set they played at First Ave last fall. The lights did not hinder their performance one tiny bit though. 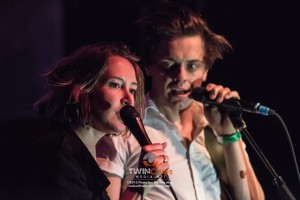 At one point they spotted a friend in the front row, pulled him on stage and told the audience to buy that man a drink! Dreimanis dedicated the song “Gentleman” to all the shitty men who want weak women and need to put them down. Not do be outdone Fay mounted the shoulders of one fan for a song. At the end she told him “I hope I didn’t crush your spine.” his reply? “Nah, I’m too fat for that!”. One heckler in the audience was swiftly dealt with, by asking if he wanted a microphone.
Fay also commented on audience members on their phone “Hi, I’m at this show. Facebook rules!”
July Talk moved swiftly through their set and changed their show to not let is get stale. The back and forth between Dreimanis rough and Fay’s almost angelic voice worked live even better than on their recordings.
If you live in one of the cities still on their tour schedule, go check them out. July Talk is an outstanding live experience. 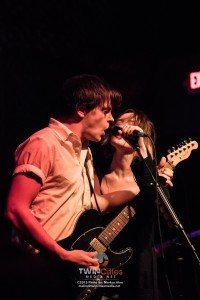 I was a little nervous as I made my way out to The Myth in Maplewood on Tuesday night. It was my first time at the venue post-pandemic and I was about to photograph some […]

For anyone that missed the last Megadeth show at the Myth, you are going to get another chance!  This time, Megadeth will be at the Roy Wilkins Auditorium and the show will be Tuesday, October […]

St. Paul Hip-Hop group thestand4rd describe themselves as “4 kids with computers”. Composed of Allan Kingdom, Corbin, Psymun, and Bobby Raps they have been making waves and great music as individuals as well as a […]