Oh Joywave! Why do you tease me so? You give me everything a photographer desires: An intimate venue, a lively crowd, cool dudes that know to rock out and move around, a lead singer that actually makes eye contact, uses his hands and has great facial expressions. And then you cruelly take it away be playing in dim red light!

Once I get over my temper tantrums, I will calm down to admit: Joywave absolutely ROCKED the Triple Rock last night! Singer Daniel Armbruster told the crowd about the special meaning the Triple Rock Social Club holds for the band. The first photo of 3 of the founding members of Joywave was taken outside the club. The band is currently on their “World Tour USA 2015” – A tongue in cheek title, not a statement of geographical ignorance. 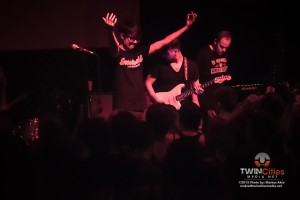 The music before their set notable as it centered on classical orchestra pieces including Holst’s The Planets and Franz Schubert’s Ave Marie which blended into the intro to Destruction. Joywave hit the small stage with force and took them on what a certain Swedish band would call a Joyride. The energy level remained high through their set. We covered Joywave earlier this year at the Myth and the small venue seemed to bring out the best in the band. Overall a fun set that had the crowd dancing and having a great time.

Synthpop singer Lights lit up Mill City Nights with bass, piano, and smoothing songs. She opened her 16 song set with “Muscle Memory,” off of her newest album, “Little Machines.” The album debuted number 5 […]

Cher Is Ageless At The XCel Energy Center

Saturday night, Cher played to a sold out XCel Energy Center and as expected, it was a spectacular as much as it was a tribute to her musical career. The night featured several set changes […]