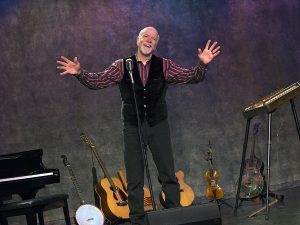 John McCutcheon’s entrance to becoming a professional musician started humbly in 1972 when he convinced his professors at St. John’s University – College of Minnesota (fellow student Garrison Keillor was a DJ on the campus station) that he should take a three month independent study to travel around the Appalachians and meet banjo players.  He didn’t intend to learn about tobacco farming or strip mining or little organizations, or the Baptist church, but he couldn’t learn about the music without learning about the community.  Thus were the seeds planted for John in both folk music and grass roots community organizing.

He never did formally return to school but did obtain his degree.  Around 1976, John took a break from teaching to do music full time, thinking he’d return to teaching as being a touring musician would not have a long shelf life.  Nearly 40 years later, he’s been able to have the best of both worlds.  John has an active annual touring schedule but also takes time during the year to teach workshops and camps to give back to aspiring musicians. 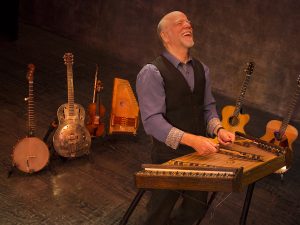 Traditional music is the base of John’s songwriting and teaching.   He is most interested in songs that others would consider singing 100 years from now.   Therefore, it’s no surprise that he has put out an album dedicated to the life and work of musician/labor activist Joe Hill in 2015 to honor the centenary of Hill’s untimely death.  John found that many of the topics Hill wrote about are still relevant for today’s listeners and he keeps that in mind when creating his own timeless music.

John was a part of starting the musician’s Local 1000 union for traveling musicians which was charted in 1992.  They got help from the American Federation of Musicians (AFM) by explaining that hundreds of musicians make their money just playing around the country, cobbling different kinds of gigs together.   He eventually served as the organization’s president for several years.

The journey of over 40 years as a recording and live performer have allowed John to release 37 albums to date and along the way he has picked up numerous media accolades as well as several Grammy nominations.    The late Johnny Cash called him “The most impressive instrumentalist I’ve ever heard” and the late Pete Seeger said “John McCutcheon is not only one of the best musicians in the USA, but also a great singer, songwriter, and song leader. And not just incidentally, he is committed to helping hard-working people everywhere to organize and push this world in a better direction.”  John’s books and instructional materials have introduced budding players to the joys of their own musicality.  His commitment to grassroots political organizations has put him on the front lines of many of the issues important to communities and workers.

It was the name and the picture that drew me to last night’s show. With a name like L.A. Salami, you’re clearly going to peak interest. Add the messy hair, signature John Lennon glasses (you […]

An Interview Andrew W.K. – The Man Who Hates Sleep – coming to First Avenue on 9/18

I had an opportunity to speak with a more well known Andrew this week, Andrew W.K. For being the first interview I have had the chance to conduct I couldn’t have asked for a more […]