What’s the buzz? Tell me what’s a-happening… It’s Jesus Christ Superstar on Hennepin Avenue! Tuesday night, the beloved rock opera had its opening night at the Orpheum Theater in Minneapolis. Fans warmly welcomed the 50th anniversary of Broadway sensation, as it was performed to a sold out crowd.

This adaption of Jesus Christ Superstar features Aaron LaVinge as Jesus and James Delisco Beeks as Judas. The play starts out with the stage somberly sitting in pitch black lighting, where all you can see is the beautiful and haunting outline of a golden cross taking up residence on the stage. Silence. When the music starts, what follows next is an hour and a half of jubilant singing, choreography and stage entertainment.

Having never seen this play before (or the 1973 movie for that matter) I went in with absolutely no preconceived notions of what to expect. I was experiencing this event with totally fresh eyes. Ultimately, being a huge fan of Andrew Lloyd Webber, I was hoping Jesus Christ Superstar would hit the mark for me the same way his other widely famous and beloved compositions do.

As far as the music and choreography goes, I was not disappointed. There is a high energy among the cast actors, with people running around and dancing between the back, front, top, and sides of the stage almost at all times. There are no empty spaces. Jesus Christ Superstar is a constant stimulation, which makes the short run time seemingly fly by incredibly quickly. Accompanying the spryness and stamina permeating off of the cast, a live band made up of electric guitar, saxophone, drums, keyboard and trumpets played exuberantly in the rafters continuously setting the roisterous mood.

The storyline of Jesus Christ Superstar was exactly what I was expecting, but with a few twists and rock and roll color splashed in here and there. The story follows Jesus and Judas, and the complicated relationship the two shared as mostly told by Judas’ point of view. We see both Jesus and Judas following their own courses of action, eventually ending with the gut-wrencthing capture and crucifixion of Christ.

While the performances by LaVinge and Delisco Beeks as Jesus and Judas were gripping, for me, what completely stole the show was the amazing voices of Alvin Crawford and Tyce Green. Standing at the front of the cross platform playing two of Jesus’ captors, Crawford’s rich bass voice echoed through the theater walls as he commanded the stage with his incredible depth and vibration. When Crawford sang, the entire crowd seemed transfixed on his brilliant range and resonance. It was just a brilliant voice. To the left, Green countered Crawford’s growling bass roars with a sweet, thundering holler that rivaled that of the most dulcet sounding Disney Prince. Green’s pitch was perfect, and I loved his enthusiastic and tight performance. The two voices of Crawford and Green feeding back and forth on each other made their appearances on stage some of the most memorable ones of the night.

Ultimately, this adaption of Jesus Christ Superstar is a stunning hit that fans will walk away from not soon forgetting. The tremendous stage lighting, high energy choreography, and sensational music proves why this play has stood the test of time, charming audiences for 50 straight years.

Jesus Christ Superstar will be playing at the Orpheum Theater until January 26th. If you are interested in attending one of the shows, there are limited tickets still available on HennepinTheatreTrust.org. Come on down and see what the buzz is all about! 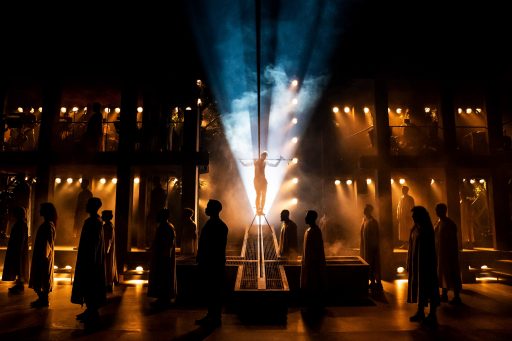 Growing up in Austria my teenage I listen to a lot of new wave, punk and ska. While there were German singing bands aplenty a lot of their influences came from the UK. So when […]

AFI was one of those gateway bands for me. I remember watching their music video for their song “Girl’s Not Grey” when it was on All Things Rock (hosted by Benji & Joel Madden of […]

Machine Gun Kelly’s new album ‘Tickets To My Downfall’ is the best album to come out in a decade. There. I said it and I’m not taking it back. Every song is a hit and […]