Jeanne Taylor (pronounced Jean) grew up surrounded by music. She is named after her grandmother who was a Minnesota Music Legend. Prince discovered her father, and her Aunts and Uncles have played or recorded with everyone from John Mayer to the Steve Miller Band. She really didn’t have a choice but to follow in their footsteps.

Taylor will release her debut EP “Jeanne,” tomorrow 11/12 at Bunkers. Details are HERE

Jeanne Taylor started performing with her family at the tender age of 2, and started her recording when she was 9 with a band she formed with her sister Kelly called The Peterson Girls. That project garnered much interest from Disney, but would have required a move to California that the family wasn’t quite ready for

How did you get involved with music?
“I was blessed to grow up in the family that I did. My grandma on my father’s side who is the most incredible jazz pianist& singer of her time. She crafted her sons and daughters into all being traveling musicians. So I grew up watching them and being inspired by them. As being the 3rd generation I wanted to continue that legacy. I’ve been singing since I was 2.”

What made you go out to L.A.?
“I wanted this to be a real thing and I wanted to at least try and see what could happen and what things would sound like. We ended up doing incredibly well and I am super proud of the songs that came from it.”

What instruments are you playing on this project or who is producing it?
“In general I play the guitar and the piano. Other than that my producer Khris Riddick-Tymes Oliver Lieber and my dad were super helpful in the production of it too. They all worked together and created this awesome sound for me. Mostly I worked with Khris who was kind of my main producer on this project cause he really made my whole sound come together. He is incredible because he works with all my idols- Ariana Grande, Meghan Trainor, and the OVO sound.”

You wrote most of this project after a breakup, but when you don’t have relationship problems how do you go about writing songs?
“It really has to be something that’s an experience for me. But it usually starts super vulnerably on the piano or the guitar. I usually come up with the melody on the piano or the guitar first. I’ll just strum it or play it for a few days. A lot of the times too, i’ll see words or someone will say a word, or a phrase that I find great and i’ll keep a log of those in my phone. I’ll go back through all those and relate it to something i’m feeling at that time. Then i’ll start crafting my verses around that.”

Who would you love to collaborate with?
“Alessia Cara, Justin Bieber, Rihanna, but that’d be crazy. Realistically speaking, In L.A. there is an artist called Corey Harper, he and I became great friends. He has more of a John Mayor-ish sound, but it’d be great to do something with him too.” 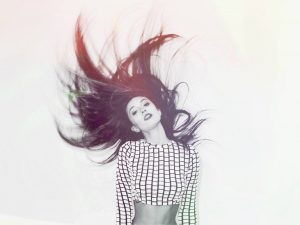 If it seems like Halestorm was just performing in Minnesota you are not mistaken.  Just four short months ago on December 8th the hard-touring band was playing the Armory in Minneapolis.  This pass through the […]