Joining a band is an exciting and difficult feat; one our friend Colin Wymore has recently accomplished. Colin is the newest member of Minneapolis’ Southern Rock band, The Plott Hounds. He will be manning the slide guitar and bringing his improvisational flavor to the stage. We had an opportunity to sit down with Colin and ask this up-and-comer a few questions. 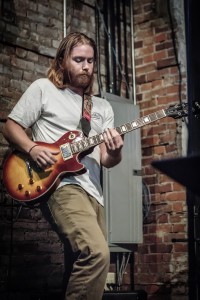 How did you meet up with The Plott Hounds?

I first met Noah last summer. I was playing on a different project and he just showed up to jam. He was just seeing if the band that I was playing with would be a good fit to do shows together with. Right from the get-go we noticed that we were into the same type of music, so we kept in touch and I was always secretly interested in playing with the band. We kept in touch after that first meeting and talked about guitars, music and sent emails back and forth for a while. One thing led to the next and they had a spot open so I jumped in.

Did/Do you jam a lot?

Not on purpose. At the time I had been playing with a different country band (The Mindy Miller Band), I had basically answered a Craigslist ad for that. As a musician in Minneapolis you end up meeting a lot of other musicians at shows. I am pretty into recording too, so that has opened up some doors as well. You meet a lot of people recording music and in studios. I wouldn’t call Minneapolis a jam band scene, but there is definitely a community of people who are friends and are not competing with each other. I’ve never been to Nashville, New York, or LA, but I get the sense that over there it is cutthroat. People are clawing their way to the top and don’t want to be friends.

What introduced you to music?

As a teenager, people turn you on to different types of music. There is no special story to it. One day I heard Hendrix and said that’s what I want to listen to. Eventually it went to Zeppelin, and the Allman Brothers. I knew pretty quick that rock music was my thing.

What strengths will you bring to The Plott Hounds?

I am pretty into soloing and improvising. I went to college in New York State, close to Woodstock, so there was a jam band scene. That turned me on to bands like the Allman Brothers and the Grateful Dead. That is totally based on improvising. A lot of my guitar playing centers around soloing and seeing where the music goes.

What has been the most difficult part of joining The Plott Hounds?

Getting used to their catalogue. They have been together for a year and have around 20 original songs and another 20 covers, so that’s 40 songs that we might decide to play at any given moment. Just memorizing that much music or getting good enough to fake it is a challenge for any musician.

I bet your background in improvisation has helped with that.

Yeah, there are a few songs where I am still a bit shaky, but as long as I know the key I can play a little solo because people don’t know the song.

What do you look for in a guitar?

The biggest factor is how it feels. It is kind of weird to say, but if you’re not comfortable holding it, or moving across the neck of the guitar easily then it probably won’t work for you as a player. I have played guitars that are really great on paper, probably something that I couldn’t afford, but then I got down and played it and it just didn’t appeal to me. The feel is a big thing and also the sound. There are plenty of guitars out there that are super expensive, but when you plug them in, they just don’t have that X factor in the sound.

The Plott Hounds are currently promoting their newest upcoming album Living Free – due out in early July. You can catch them in Monticello on May 29th as they will be playing with the Chris Hawkey Band. For all the latest concert info on The Plott Hounds, check them out online at:

Marah in the Mainsail triumphantly release “Bone Crown” at the Amsterdam

No matter how many or few shows you get to see music fans know the real thing when they see it, and that’s how I felt the first time I experienced Marah in the Mainsail […]

Local Progressive Metal artist Cymothoa are gearing up to release their latest album on June 3oth at Lee’s Liquor Lounge. The line-up for the evening will include several bands from Zero Budget Records. Along with […]