If it seems like Halestorm was just performing in Minnesota you are not mistaken.  Just four short months ago on December 8th the hard-touring band was playing the Armory in Minneapolis.  This pass through the state they will stop in Mankato on April 18th at The Verizon Center’s Grand Hall.  They will be joined by Palaye Royale and Beasto Blanco.  You can purchase tickets and find more information HERE.

Self-doubt and depression clawed at the edges of Lzzy Hale’s mind when it came time to pen Halestorm’s fourth album, a follow-up to 2015’s Into The Wild Life. The musician didn’t feel like she was where she needed to be, both professionally and personally. When she and her bandmates, Arejay Hale, Joe Hottinger and Josh Smith, began writing, Lzzy wasn’t even sure who she was. “I kept thinking, ‘Can I still do this?’” she says. “I went down a lot of rabbit holes, and I’m my own worst critic. I needed to get over a lot of internal hurdles during this writing and recording process. This record was about overcoming inner demons.”
The band began writing, but the first batch of songs didn’t feel quite right, so Halestorm scrapped it and started over. And in the end, Vicious represents Halestorm’s most personal and most inventive album, a deeply lived-with collection of songs teaming with genuine heart and soul. It’s also how Lzzy got her groove back. “I don’t think there was any other way for me to get through that difficult time than to write about it,” she says. “This record was like therapy.”

Since their inception in 1998, Halestorm have toured extensively with a diverse variety of artists, including Eric Church, Joan Jett, Avenged Sevenfold, Alice Cooper, Rob Zombie, ZZ Top and Evanescence. They’ve played around 2,500 dates around the world to date, and performed at festivals like Taste of Chaos and Rockstar Energy Drink Uproar Festival. Most recently, the band scored a 2019 Grammy nomination for “Best Rock Performance” for “Uncomfortable,” marking their second after their 2013 win for “Best Hard Rock/Metal Performance.” Loudwire named Lzzy their “2018 Rock Artist of the Year,” last year, and two years prior, she was named the “Dimebag Darrell Shredder of the Year” at the Metal Hammer Golden Gods Awards. Both Halestorm and The Strange Case of… were certified Gold, further evidencing Halestorm’s massively supportive fanbase. Halestorm have also made history: “Love Bites (So Do I),” the hit single from The Strange Case of… ascended to No. 1 at Active Rock radio in the U.S., making Halestorm the first-ever female-fronted group to earn the top spot on the format. 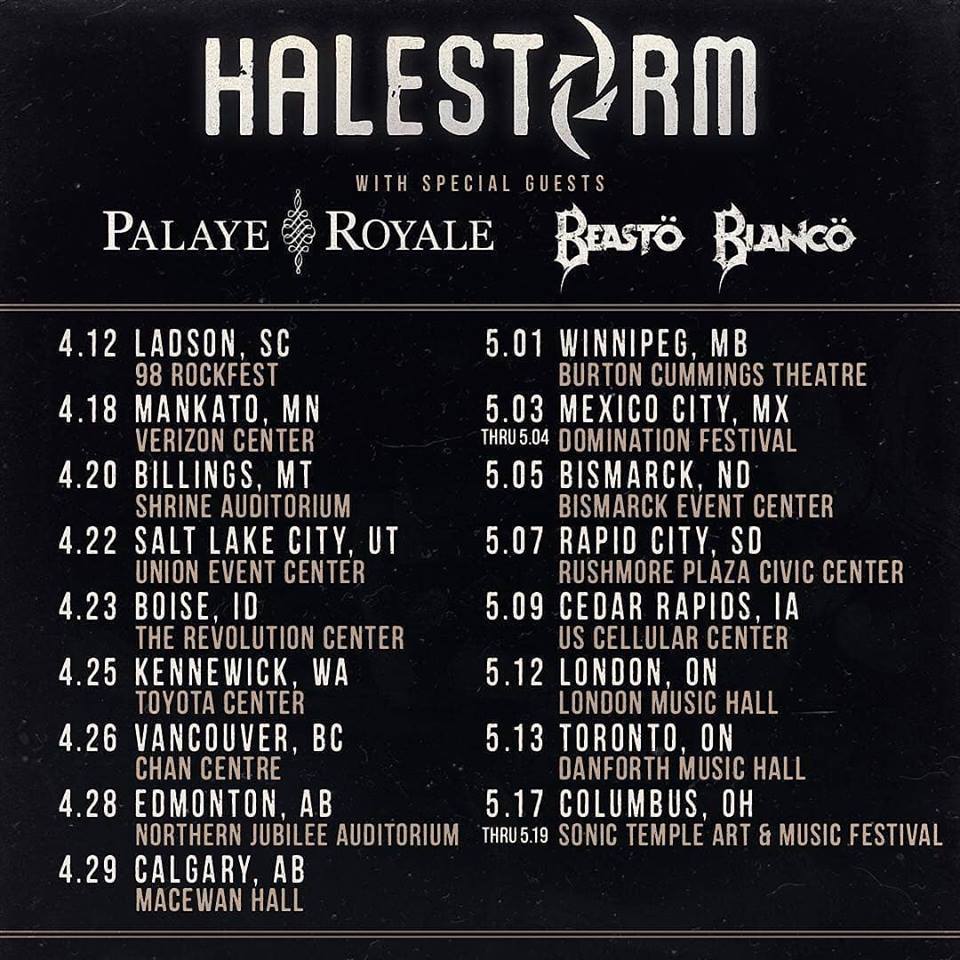 Each member of PALAYE ROYALE doubles as musician and visionary. The Pirate, The Vampire, and The Gentleman inspire a level of devotion reserved for My Chemical Romance or Twenty One Pilots, as their deep fan connection crosses genre-divides.  Kerrang! declared the band to be “on the cusp of next-level stardom” and with good reason. PAYALE ROYALE went from support act on any tour that would have them to the cover of Rock Sound and Alternative Press. “Morning Light,” “Mr. Doctor Man,” “Get Higher,” “Don’t Feel Quite Right,” and “Ma Chérie” amassed 30 million YouTube views (and counting). Boom Boom Room (Side A) paved the way for this year’s hotly- anticipated follow-up, Boom Boom Room (Side B), heralded by the arrival of the overnight smash lead single, “You’ll Be Fine.”

PALAYE ROYALE brought the juxtaposition of the glitz and grime of their teenage years spent in Las Vegas, when they relocated to Los Angeles in 2011. The ghost of Charlie Chaplin was surely some sort of unseen guide as they took up residence in his old home and rehearsed continuously in a basement. By the time they hit the road, borrowing their mother’s Cadillac Escalade, Remington Leith, Sebastian Danzig, and Emerson Barrett were a tightly wound creative force. (Not long ago, they slept in that SUV outside a Motel 6, unable to afford to rent a room.) It was Alex Burdon, daughter of The Animals singer Eric Burdon, who insisted Sumerian’s founder see the band. (The label offered them a contract the same night.) Los Angeles radio personality and tastemaker Rodney Bingenheimer introduced PALAYE ROYALE to rock industry legend Kim Fowley, another strong supporter. James Iha of The Smashing Pumpkins/A Perfect Circle and Corey Taylor of Slipknot/Stone Sour also count themselves among the band’s true believers, having worked with them as a producer and taken them out on tour, respectively. Sleeping With Sirens’ Kellin Quinn made a guest appearance on Boom Boom Room (Side A).

Sumerian’s Ash Avildsen handpicked Remington to voice the lead character in American Satan, Johnny Faust, a young rock star trapped in a literal deal with the devil. As the voice of the fictitious singer’s songs in the movie, Remington collaborated closely with Asking Alexandria guitarist Ben Bruce and Black Veil Brides singer Andy Biersack, who invited PALAYE ROYALE on tour with Andy Black.  As their moniker itself evokes (Palaye Royale is the name of the Toronto dancehall where their grandparents met in the ‘50s), the brotherly trio is eager to connect themselves and this generation to the spirit of the past, but reinvigorated for today with eclecticism and fierce individuality. Their tours are like a traveling circus. Clad in scarves, hats, paisley shirts, and makeup, as the Soldiers of the Royal Council attest, it’s the PALAYE ROYALE lifestyle.

Gretsch guitar tones that shimmer with reverb, drums that shake and pound, vocals that claw forth with the electric urgency of the early punk movement, all swirling together with the swinging cool of the 1960s and the swagger of latter day Brit Pop bands such as The Libertines and early Arctic Monkeys. Each show comes with an element of unpredictability and danger, with the three guys playing as if their lives depended on it, pure showmanship over perfectionism. As Classic Rock Magazine wrote, “If you want theatrics, these boys deliver in spades – and not just in their headline-grabbing threads and eye-popping stage show.” The Rolling Stones, The Black Crowes, and The Doors collide with The Ramones and Iggy Pop within their songs, with a hint of the early blues that inspired Led Zeppelin. It’s fast-paced dirty rock n’ roll. It’s glam and grime, spectacle and sweat, showmanship and songwriting. Rock Sound’s in-depth cover story, drawn from an intense 72-hours with the brothers, called PALAYE ROYALE “Rock’s Next Superstars,” predicting they “might just change it all.”

A band and an audience united in one inseparable union of musical thunder and sensational spectacle: Welcome to the world of Beasto Blanco. Whether illuminated in the spotlights of cavernous arenas or headlining packed theaters and clubs on their recent “US” tour, the band’s mission is unwavering: to create an immersive experience where everyone is welcome to join an extended family whose support is unconditional and authentic.  Since its founding, Beasto Blanco has riveted worldwide audiences: in Germany, Switzerland, the Czech Republic, Hungary, Spain, France, Poland, Slovakia, Sweden, Austria, Norway and the UK; at sea with the “Monsters of Rock” cruise, and across distant points of the North American heartland, from Anchorage to Los Angeles.

At the forefront of Beasto Blanco stands a potent triumvirate. Band co-founder, front man, lead vocalist and guitarist Chuck Garric, distinguished by his notable legacy as a touring and recording musician, is a creative force of nature. “Beasto Blanco is my inner beast, my Hulk, my Wolfman, the thing that I turn into when I hit the stage,” he says.  Chris “Brother” Latham is a consummate musician whose dexterous guitar artistry weaves rich orchestral frameworks for the band’s intricate arrangements. A native Alaskan, he recalls that the first musician he met when he arrived in Los Angeles was Chuck Garric. This bond became a band when they co-founded Beasto Blanco in 2012.

Resplendent in eye-popping, self-imagined costumes is vocalist Calico Cooper. With extensive onstage and onscreen experience, Calico is a compelling and empowered rock goddess whose bravura vocals mirror an electrifying onstage image. Combined with touring and recording stalwarts Jan LeGrow on bass, and drummer Sean Sellers, anchoring the colossal rhythm section, Beasto Blanco proves to be a guided force defying the grips of Rock n’ Roll gravity. With their newest full-length released titled ‘We Are’, Beasto Blanco blends a sweeping spectrum of aural colors into a vivid sonic palette. Written by Chuck along with his wife, lyricist Lindsay Garric and Brother Latham. With producer Ryan Green at the helm, Beasto Blanco’s ‘We Are’ reveals a band at the peak of its powers, whose formidable artistry is distinguished by intelligence, melodicism and musicality.

But make no mistake: The primal Beasto Blanco elements remain the essential core of ‘We Are’. Fans of the band’s previous releases – Live Fast Die Loud, their self-titled Billboard charting follow-up, and their incendiary Live from Berlin, recorded at the Mercedes-Benz arena in Berlin, Germany during the band’s tour with Böhse Onkelz, will revel in the intensity of the band’s blazing alchemy of real songs, anthemic choruses and sterling musicianship. Chuck and Calico’s enigmatic chemistry formulates the axis of Beasto Blanco’s onstage appeal. Chuck says, “Calico and I don’t plan what happens. You never know what she’s going to do. She’s a free spirit.” On the new release, listeners will experience more of Calico both singing lead on selected tracks, and sharing verses with Chuck who confirms, “The contrast of Calico’s vocal charm and charisma with my low vocal growl adds sonic elements both to the record and our live show.”

In a genre where a powerful female presence is rare, Calico Cooper notes that her role as the band’s high priestess serves as an inspiring archetype. “I get approached by women saying, ‘Thank you for being so strong and so powerful,’” she qualifies. Her interaction with Chuck – whom she is known to chase across the stage with a spiked bat — engages the audience with a dynamic that blurs the line between combat and romance.  More than a band, the members of Beasto Blanco consider their music to be a soundtrack for an expansive community. “We’re a lifestyle band, bringing culture back to rock and roll with this style of music, by what we do and also who we are,” says Brother Latham. “We call our fans ‘loyal beasts,’ continues Chuck. “They can reach out to each other, and always look out for one another just like any good pack would.”

Concludes Calico Cooper, “If you are a blue collar person who gets up and busts your ass everyday or if you’re a working mother who doesn’t get any sleep, then you’re in the tribe. We write about people who are down trodden and overlooked, but they don’t say ‘Hey, look at me.’ They have a silent strength to them – and they make the world go round.”

All Aboard the K-Pop Train! with KARD at the State Theatre

On Friday night I ventured outside of my comfort zone to attend the K-Pop group KARD’s show at the State Theatre. When I saw their name as a coming show to Minneapolis I thought this […]

If you’re a fan of late night TV, Comedy Central and hot takes politics, it’s safe to say you may have heard of Trevor Noah. Trevor Noah is a South African comedian, television host, and […]