South Korean idol group Golden Child brought their Meet & Live Tour in USA to The Lyric @ Skyway Theatre on Saturday, July 2nd. This was performance number five of ten – the halfway point of a tour that has one show booked every-other day!

It’s an intense performance schedule, even without traveling halfway around the world, first. And then, if you consider that K-pop concerts are typically not just a live stage show -frequently each concert is a half-day event with carefully organized pre-and post-show interactions with VIP ticket-holders- the idea of a 10-shows-in-20-days tour takes on new meaning.

But this kind of intensive fan engagement is, after all, exactly what idols train for. And each of the eight GolCha members on tour –Bomin, Jangchun, Joochan, Jaehyun, Donghyun, Jibeom, Seungmin, and Y– appeared to be in his perfect element at Saturday’s show.

The Stage: A bare quasi-proscenium backed by a large-scale LED screen for visual effects. This is the lean tour format we’re getting used to seeing for intimate idol events in the U.S.

The Outfits: The lads were clad all in white with gold accents, a vaguely military-ish silhouette that might evoke images of naval dress-whites, depending on what naval dress uniforms look like in your part of the world. However, this is K-pop, so there were fewer shirt-sleeves.

The Show: Two solid hours of expert singing, dancing, chatting, and laughing with eight-tenths of Golden Child’s members, punctuated by some high-production (and hilarious) VCR content at key transition points in the show.

(Seriously, this tour has one of the funniest comedic VCRs to make land in the States, both in concept and execution. As a sort of intermission, a segment of clips ran showing the members spoofing different TV genres such as day-time dramas and commercials, much to the delight of the crowd. When the segment ended, someone on the floor screamed “I. LOVED. THAT.”  and someone else yelled “THAT WAS AWESOME!” So, compliments to Woollim and the GolCha members for delivering superlative idol sketch-comedy and inspiring Upper-Midwesterners to vocalize definitive approval.)

The set list included all the lead singles you might expect, and plus a few recent deep tracks, including the all-English pop-rock track, ‘Bottom of the Ocean’ from the group’s second studio album, Game Changer (2021), and the dreamy ‘Milky Way’ off their 5th EP/mini album, Yes (2021). 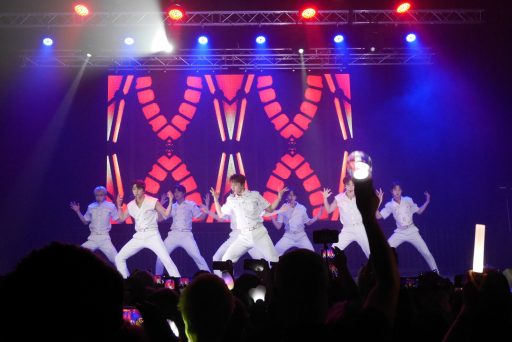 Jangchun and Joochan ran tag-team as lead MCs, very much like ducks in water, with an off-stage translator working hard to keep up with their -and everyone else’s- banter. Especially entertaining: the duo’s vibrant account of their adventures with Mall of America roller coasters the previous day.

Jibeom’s headset mic betrayed him early in the show, but he was able to quickly swap it out for a hand-held, and then got the headset back later on. The technical difficulty was handled with aplomb.

Seungmin insisted the dance for ‘Ra Pam Pam’ suits him best – no one in the audience disagreed. But it’s also likely that everyone present would agree any and all of their choreography suits him well.

Y treated the crowd to a little bit of his solo track ‘Fantasia’ in a cappella.

Donghyun -who has a little bit of a Choi Woo-shik aura going on- was the first to mention absent members Daeyeol and TAG, promising to return to Minnesota with all ten GolCha members next time.

And Jaehyun seemed to really enjoy reconnecting with the Upper-Midwest, having spent time in a study-abroad program in Wisconsin some years earlier. He even threw in some shout-outs to the Vikings and the Twins, no doubt earning him some regional street cred with locals.

The Fans: The wonderful diverse mix of people who gravitate to K-pop shows! This time majority female in a wide range of ages – even some school-age kids with moms and aunties. Hair dyed in candy colors, hair in braids and protective stylings, hair tucked up in hijabs. Everyone having a great time and basking in the radiance of live idol magic on-stage. One of the lovely and amazing things about the fandom is the diversity it attracts, and the unity it can inspire.

Minnesota Goldenness, be sure to let Woollim Entertainment and Studio PAV know how much you loved having Golden Child in town! 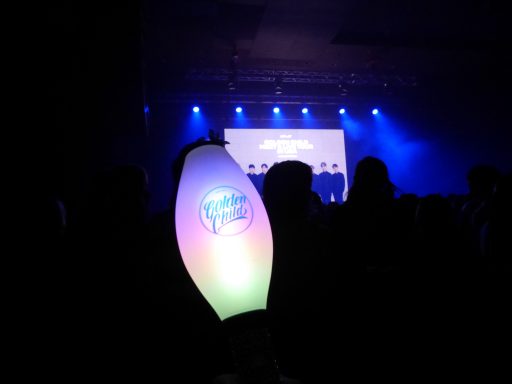 See the full list of stops on the Golden Child Meet & Live Tour in USA, below: