As I stood outside First Avenue last night, I knew this was not going to be just another show for me. After all, Gary Numan has been a fixture in my life for over 40 years. Since that fateful dance party where I was introduced to “Are Friends Electric”.

Fittingly DJ Jake Rudh opened the evening to a crowd of Transmission regulars with a liberal helping of fans that discovered Numan in his latter years. Jake promised he would dig deep for this set and boy, did he ever! I was greeted to the sounds of Grauzone’s “Eisbaer”, a German New Wave song with howling winds, stark synths and lyrics that explains why polar bears don’t need to cry. Well played, Jake.

First up was I Speak Machine, the experimental project of musician Tara Busch. The tracks on their latest album “War” are called at once exhilarating and exhausting. And quite frankly that’s as good a description of their music as I could give myself. Watching the performance bounced me back and forth between “Wow, that’s cool” and “What just happened”. As Busch warned the crowd “It’s gonna get messy”.

Back in 2001 by pure luck I saw an ad for Gary Numan playing at First Avenue. At that point I had no clue he was still performing. Of course I had to go and my mind was blown. Fast forward to 2014 and Gary playing at Mill City Nights was the first “real” concert I got to photograph. His team kindly granted a photo pass to me as a fan. That experience led me to start this blog and hundreds of concerts since then. We shared the pit with a young photographer (complete with face paint) last night, I hope their experience was as awesome as mine. 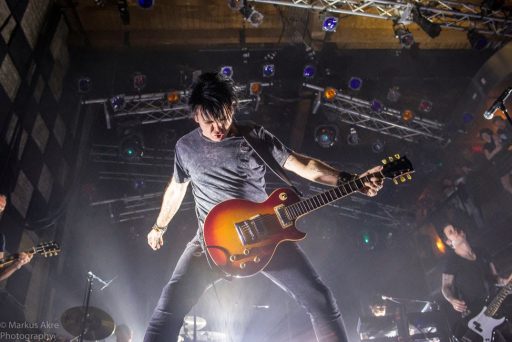 One of the impressive things about Numan is that he does not rest on his laurels but pushes and reinvents himself constantly. The androginous emotionless android has become a powerful rockstar with a stage presence that blows minds. Songs evolved along with him. “Metal” in particular has become one of my absolute favorites.

This was the last show of a rather long tour and also the farewell show to one of the band members, Richie who has been touring with Numan for quite some time. The band left it all on stage. As I left First Ave, I realized that childhood heroes don’t always fade away. In my case Gary Numan returned and became an influential presence in my adulthood as well.

Set List: Intruder / Halo / Love Hurt Bleed / Metal / The Gift / Films / Is This World Not Enough / The Fall / Pure / Resurrection / Down in the Park / Ghost Nation / Cars / My Name Is Ruin / Pray for the Pain You Serve / The Chosen / A Prayer for the Unborn

Encore: Me! I Disconnect From You / Are ‘Friends’ Electric?

The Unified Dance Marathon took place on Saturday, November 12, 2016, at the Mall of America Rotunda. The dancers danced the day away from 10 a.m. to 10 p.m. The Dance Marathon was open […]

The Dead Willow performing live at The Plott Hounds CD Release Party. no images were found

Trombone Shorty Brings The Heat To The Minnesota Zoo

The Weesner Family Amphitheater at the Minnesota Zoo was voted ‘the Best Outdoor Music Venue’ by WCCO and for a reason.  It’s a great venue for music with terrific acoustics and beautiful surroundings.  Concert goers […]