With a heat advisory in effect, only the hardiest Cash fans made their way to MN Zoo. No, not to admire the animal exhibits, which were all roped off for the concert, but to see Grammy Award-winning artist, Rosanne Cash.

The night began around 7:30 with local musician David Huckfelt taking stage. Huckfelt played through a number of originals littered with personal messages and comforting melodies. Whether it be inspiration derived from his loving grandparents or Minnesota life, David was not shy in introducing the audience to the personal side of his life. Ending the night, Huckfelt broke out a cover of Bob Dylan’s classic, “Girl from the North Country” a song which I believe captured the essence of this opening set. 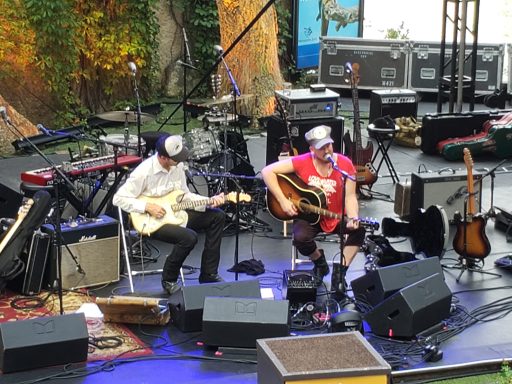 The heat was still high, but storm clouds were beginning to move in as Rosanne Cash took the stage. Met by thunderous applause and standing ovation Cash seemed delighted to be back in the company of a Twin Cities audience. Cash opened her set with “A Feather’s Not a Bird” a song with bluesy rifts and feet stomping beats. Cash was here supporting her new album, “She Remembers Everything.” An album full of reflection on the ebb and flow of life, her regrets and triumphs, and the results they’ve brought. One of these results was bandmate and husband John Leventhal accompanying her on stage. Leventhal has an impressive musical career of his own and moves his hands over his guitar with professional precision and care. Many of his solos were the highlight of the night generating audience applause on several occasions.

Not long into the set, everyone but Cash and Leventhal left the stage and the couple settled in to play songs of Cash’s cover album “The List.” For those of you who are unfamiliar with this album’s backstory, Cash received a list of 100 songs on her 18th birthday from her father, Johnny Cash. This list was made up of her father’s favorite country songs and was meant to be her education in both songwriting and life. Cash immortalized this list in 2009 with an album covering 12 of these songs. Her cover of “Sea of Heartbreak” was originally recorded as a duet with Bruce Springsteen but since he was unable to make the show, Leventhal stepped in to sing with Cash.

With a short spurt of rain having come and gone, the full band returned to cover a Beatles tune. They closed out the set with a number of tracks off Cash’s albums with songs from the set including hits: “Seven Year Ache” and “Blue Moon with Heartache.”

Cash reaffirmed the importance of her family’s legacy Friday night and brought the spirit of her father to stage for all audience members to feel.

The core duo of St. Paul band The Langer’s Ball has been together since 2007. In 2012 they expanded to a 5 piece Michael Sturm – Guitar, Lead Vocals, Hannah Rediske – Accordion,Pennywhistle & Backing […]

Coyote Kid: The Band You Need To Tap Into Before They Find You With “Sold-Out!” Shows

Beware the night When the moon is full   Have you heard of Coyote Kid Yet?   Like a moth to the flame Or a blood stain to the bull   Start with their Youtube…   There’s […]

The Fixx Are Coming To The Pantages November 12

Brit pop punk legends The Fixx are coming to Pantages Theater.  Tickets and show information can be found HERE. Thirty years after exploding into rock relevance, The Fixx continues with the same line up.  Something […]