To say that I was looking forward to Foals show at First Avenue last night would be a rather British understatement. I had caught them as an opener for Silversun Pickups at the Myth back in 2016 and was impressed. When I arrived we were told that photo rules would be different – we would get to photograph the last 3 instead of the first 3 songs – my interest level went up even more. I was not alone, as First Ave was almost sold out. I spotted Top Chef alum Justin Sutherland in the crowd (I think 🙂 )

Starting the night was Atlanta’s Omni. A cool 3 piece band with a minimalist indie rock sound that pays homage to their post punk roots. They drew a good sized early crowd and their set was well received.


Preoccupations was up next. At first I thought I wasn’t familiar with them but the name kept ringing a bell. Looking at the merch boot, the penny dropped – they used to be VietCong before someone decided the band name was offensive. Their sound gave us a taste of things to come with the headliner. The guitars were more distorted, often frantically switched with keyboards and the sound while staying post punk, got more complex and darker. Foals brought a slew of lights, palm trees and fog machines to First Avenue. One was even set up by the green room, to ensure everything was shrouded in a fine mist. Watching the start of a band’s set from the crowd and not from behind a lens felt weird – not sure how long it’s been since I did that last. I had a bit of an “So that’s how the other half lives” moment. A short intro launched the band into the first track from their new album “Everything Not Saved Will Be Lost Part 1” – There will be a part 2 later this year.

Foals records are cool, layered and fun………. Foals live are all that squared as well as hard rocking. Between the fog, lights, complex guitars and Yannis Philippakis’ vocals they weave a net that captures everyone in the venue – and probably a few passerbys.

When it became time to enter the for the last song of their set “Inhaler” Foals dialed up the energy level even more. Philippakis descended into the crowd while playing his guitar without missing a single note (granted I’m clueless when it comes to guitars, but DANG!).

What would the encore bring? Photographers were moved to only one side of the pit, so clearly something was planned. As Foals returned to the stage with the epic “What Went Down” Philippakis ditched his guitar and went for a bit of crowd surfing only to leave the stage again and make his way up that stairs and climbing the railing. Was he going to? No!! Yes?? As I whipped the shutter speed on my camera higher, he stood up and jumped from the balcony onto fans outstretched hands. HOLY CRAP! 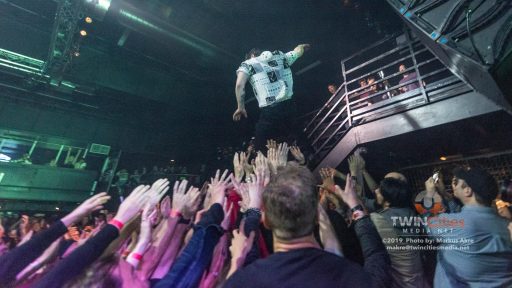 As he got flipped back into the crowded pit I ended up taking a foot to my mouth – such is the rock’n roll lifestyle. As always Foals closed with “Two Steps, Twice”. It was cool to see the playful interaction with fans in the front row at the end. This was one of the most energetic shows I recall at First Ave, heck anywhere. And it wasn’t just the “off stage antics” Foals is a band that sets the bar for live performances in my book.

Starset brings their 2019 Divisions Tour to the Varsity Theater on Sunday October 20th at 6pm. Doors open at 5pm for this 15+ show. Opening bands are Palisades, Hyde, and A Brilliant Lie. Starset describes […]

Hairball brought their rock and roll experience to the Grandstand on the final weekend of the great Minnesota get together. The venue was packed on Saturday night, but not as packed as the Midway, and […]