I was debating between chocolate cake and ordering an old fashioned while my Valentine was using the restroom this last Friday night, before I shot a glance down at my phone to see a text message from my editor.

“By the way, you’re good to go for Excision tonight.”

I wasn’t sure if I wanted to laugh or panic as I began to shoot off thought after thought – “this has to be a joke, right?” I began to run through the logistics of getting from my dinner, back to my date’s place to get my backpack, to my buddy’s apartment in Dinkytown (he’s been my basecamp-providing-savior whenever I go downtown for shows and can’t get home to drop off my work supplies), and then sprint to the Armory to attend a show that was about to rewrite my entire night’s story. I knew what I had to do now because unlike myself, our manager does not waste words – this was not a joke, I realized, as my date came back and sat at the table. She saw the look in my eyes, and with knowing in advance that this might occur – I told her what she already knew as I got our tab and an Uber was ordered; Step one of many this evening that would have to be hit like moving targets as this was less than an hour before the opening act was set to take stage. I left my love in Dinkytown that night as I got mentally prepared to go to a rave instead of embracing a wonderful evening with a woman I don’t deserve, but romance must be put on the backburner when you have the opportunity to cover one of the biggest shows of the year: Excision.

Fast forward to my Uber rolling into downtown, as a photographer I am related to at the venue shot a text: “you’re lucky that things are running behind.” Really? As if my luck wasn’t lost with the signing of my check no less than an hour before, right? We pulled up, and a bone-shaking vibration consumed my body; you could literally feel the bass throbbing through the thick concreted structure of The Armory – outside – this has never happened before. This was no ordinary rave.

I got my ticket, shot a “hi” to our friends in the box office, fist bumped a security guard that I watched throw out a (dehydrated?) “frat bro” a few weeks before, and made my way to the funnest part of the show – metal detectors! I walked through once – oops, forgot to take the belt off – then retried the process accordingly before I began to refill my pockets and replace my pants-keeper-upper as I began chatting with the security staff. The pulsing of bass and smell of fog and vape clouds was growing the closer I got inside. Out of fear, admittedly, I was looking for something to slow my entrance into the chaos I knew was just a couple sets of stairs away. I have a problem with getting lost in conversation with strangers, but this chat was something that changed my night as I quickly learned that my friend in all black was actually a local artist in the Twin Cities. Before I get any further into our night, I want to give a quick shout out to Pancho, a brother-in-arms by knowing the juggle of a day job and a side hustle with an art emphasis all too well. I got his story, which could be its own article alone, but the beauty of art is that it’s worth a thousand words. Check this guy out HERE and at @heir_pancho because he’s doing things with “Art Brut” that I didn’t know was possible with a set of human hands, eloquently bringing back traditional cultural styles in a time where a banana taped to a wall can be deemed worth millions – this guy needs some hype.

I am PANCHO The Virtuoso

We parted ways after we found and followed each other on Instagram, and I made my way up the stairs. Things were a little delayed because the staff and artists wanted to make sure that the whole experience was perfect, and I later realized that it was definitely worth the wait once Excision took the stage, and lasers came out of places that I have never seen before at this venue – I say this with confidence after seeing over a dozen shows and several raves specifically here.  Pancho encouraged me to check in with a bartender for updates on set times and so on (these things are vital for sanity if you’re a confused and over-worrying beat writer). After hop-scotching my way through dancers and glow-stick performers, I got that info and gasped a sigh of relief, now able to take in the beautiful storm brewing around me.

I don’t think I have ever seen so many people crammed into that venue until that night in Minneapolis, and I don’t believe I’ve ever seen so many people (including myself) enjoy every single opening bass drop that filled the time leading up to the main act. First we had Calcium get the ball rolling, then Lucii came in with the next jab of glory, with a left-hook of head banging from Champagne Drip, the pleasant gut-punch of bass from Wooli B2B PhaseOne, the kick of EDM bliss of Dion Timmer B2B Dubloadz, and the electronic OOMPH of nearly finishing-hits from Virtual Riot all leading up to the finishing blow of insanity and energy from Excision; keep in mind, this was just night one of two. I can’t help but think how it should be considered illegal to see TWO raves in a row, but if you want an idea of how the second night went – go check out @northstarimagery on Instagram and you’ll get a taste of that night.

I managed to make my way around the crowd of smiling ravers, who were wearing everything from swimsuits and glitter to fur coat blankets and facemasks, then add in few a thousand glow sticks and flashing lights, you get all but a taste of what we had going on. Then, plug in a slightly overweight guy wearing date night garb, hiding in the back of the crowd while scrambling notes together, trying to process everything while the concert arena received a bombardment of lasers, flames, and smoke screens – the camera pans back to me. Words alone cannot give justice to what was about to be recounted from that night. I got as many pictures as I could on my phone’s toaster-quality camera, but let me try to paint a picture.

Excision arrived, with a backdrop of robot dinosaurs painting an electronic canvas, which were almost hard to see as the sound coming from the stacked speakers was blurring my ability to think of anything besides “Oh. My. God” over and over. Admittedly, I don’t have the proper artistic vocabulary to describe EDM music yet, but I can tell you that I never felt so consumed by a show’s overall experience. I wrote a few weeks ago that Armin Van Buuren is godlike, so in the most playful, complimentary way possible – I’d say I had now found the Devil of DJs, as flames and demon-like images decorated the visuals while the airwaves were being painted with some of the nastiest, dopest dub-drops and trap tunes. The genre of glitch-hop was now crawling across my skin, gifting me goosebumps and making the hairs on my neck stand up, almost as if they were joining the likes of the thousands of mind-blown fans in the crowd. Picture this: the lights and sounds must come from the stage area at shows – right? Nope. Not tonight. As soon as Excision’s set began, we were wowed byway of lights shooting from all around the railings of the arena, creating a euphoric neon arching roof above us – blame it on my squirrel like attention span if you want, but I found it extremely hard to focus on the stage for more than a few breathtaking moments at a time without letting my head roll back as my eyes shot up – eyes glossing while peering at the laser beams that were curiously battling and dancing above us. 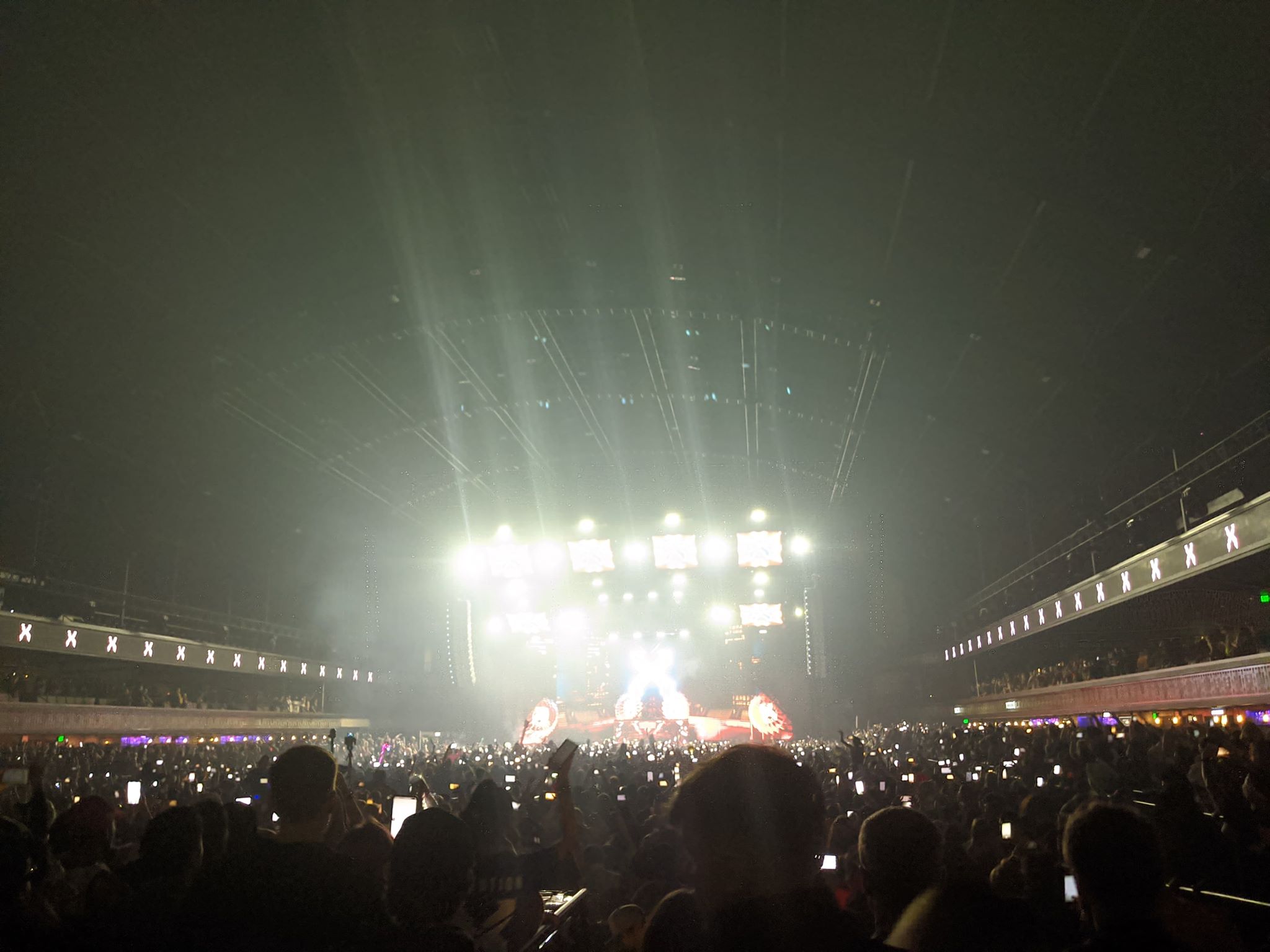 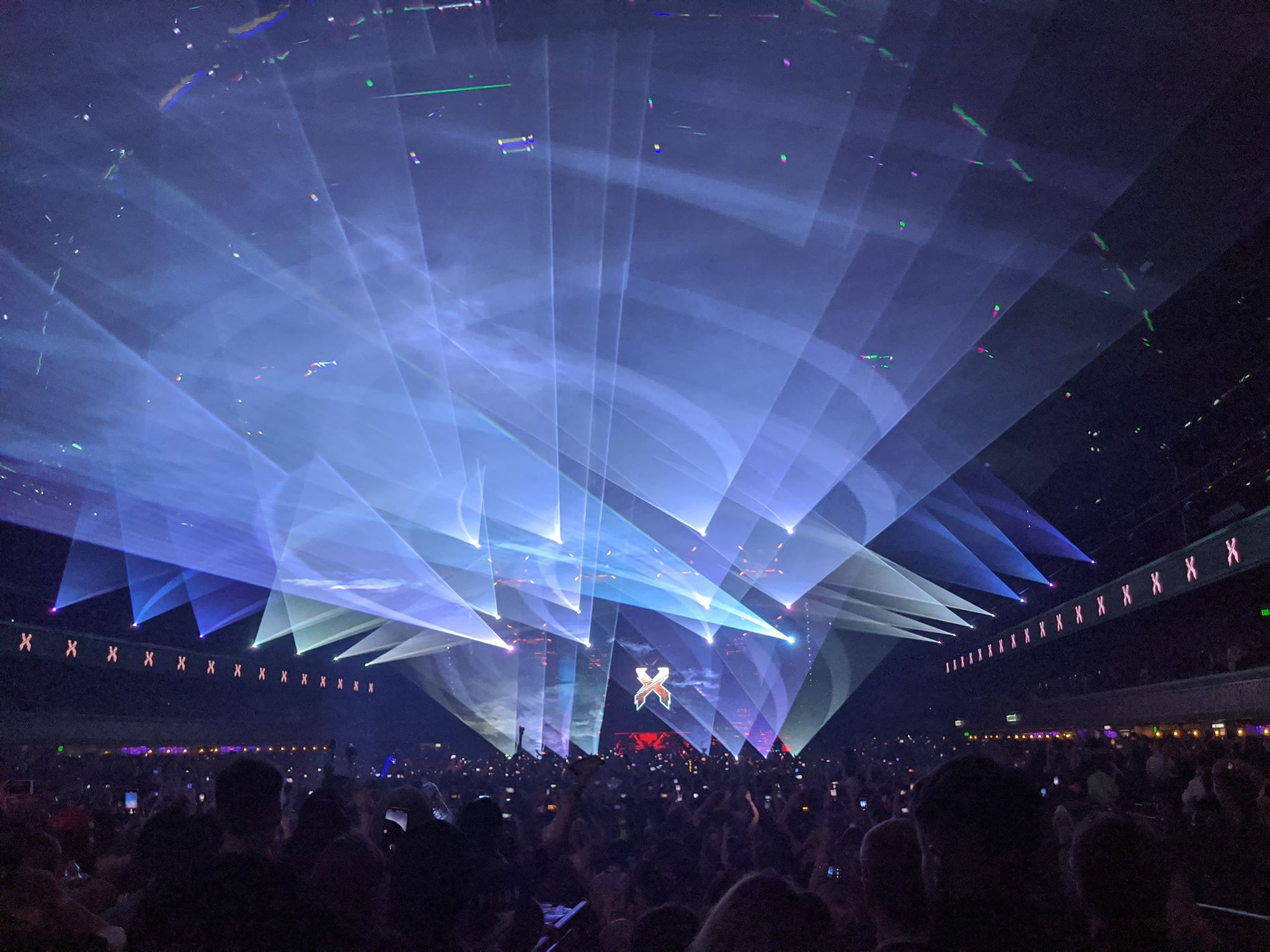 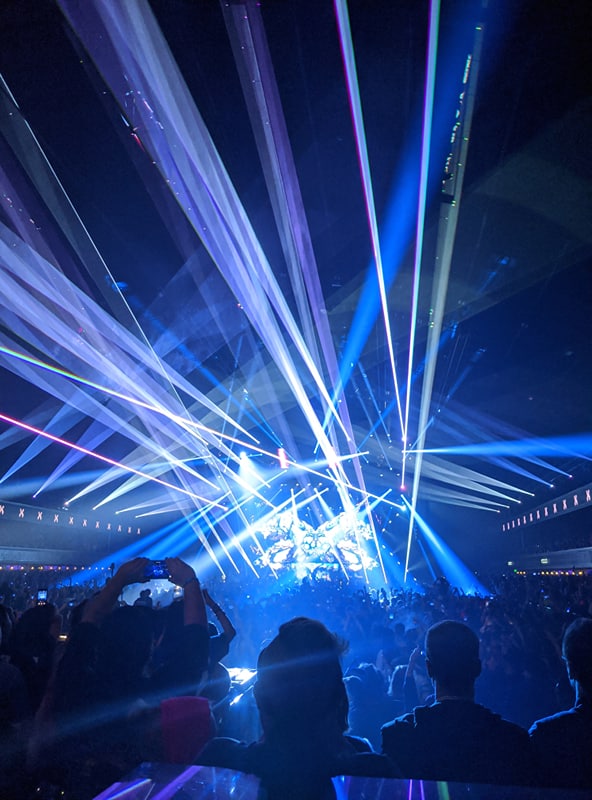 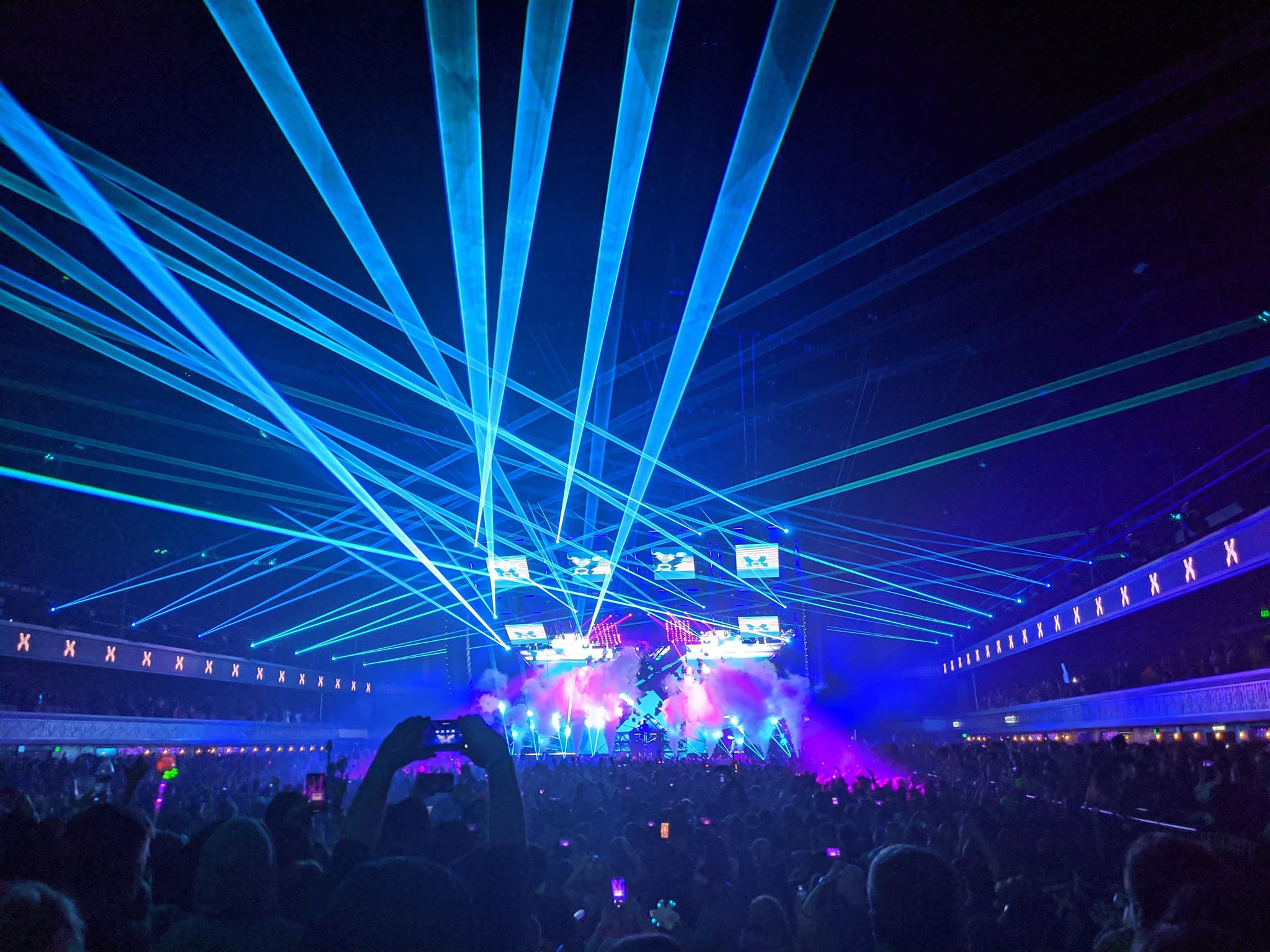 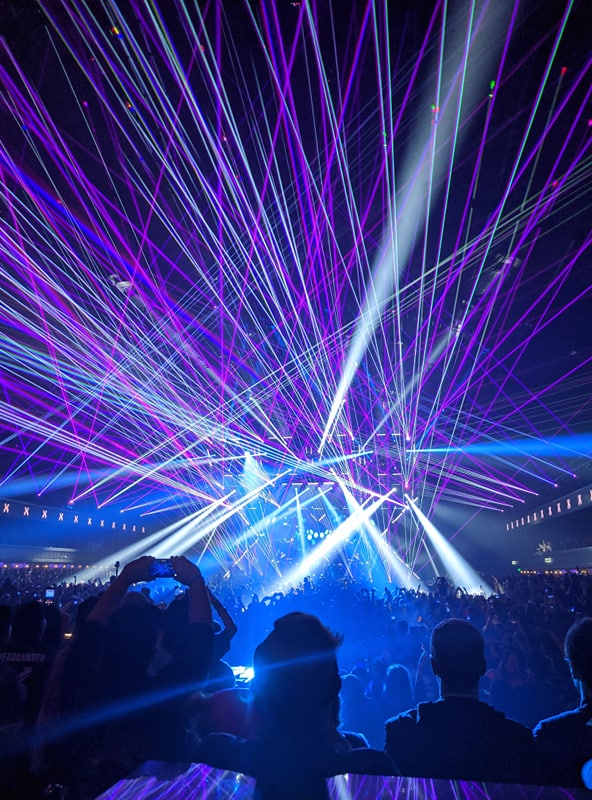 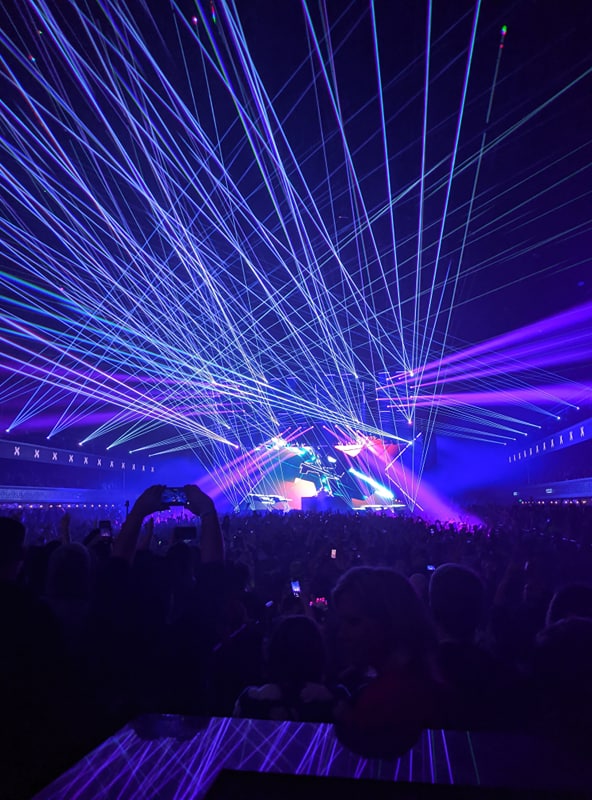 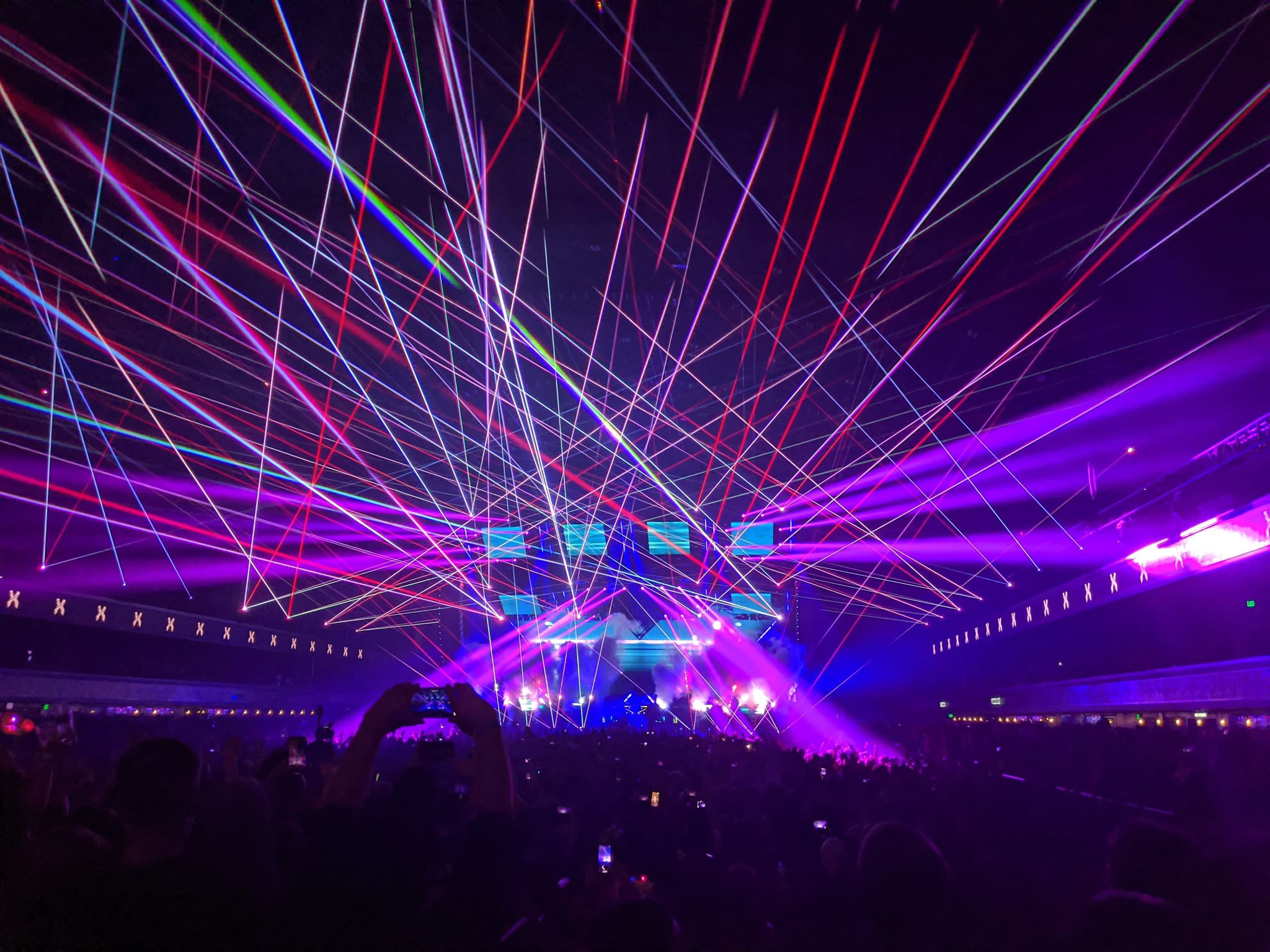 [Show thumbnails]
The Armory’s technical team and their equipment displayed their (admittedly) previously underappreciated abilities to cater to the music on stage, literally changing the game with their skills and in turn, taking us out of the world we find ourselves walking through every day, letting us fully live in that moment, and simply existing as one entity with the music and atmosphere that Excision and company presented that night in February.

A few months ago I proclaimed that “Illenium is Cupid,” because I had met several couples who’s romance sparked at Illenium’s previous shows. “How ironic” I thought through the music playlist that night, as I was now worried if Excision was now giving me the opposite type of story…

My experience is my own, of course, but through the lights and sounds described above – none of us really had the ability to chat about our love-lives. So on that note, only time will tell if The Evolution Tour experience lessened the likelihood of me getting another date with my Valentine-now-on-hold. I might try to go back and get that cake slice we were eyeing before my signal fire was lit to head downtown, but that’s a different story for a different article. I mean, God forbid that the follow up to this story takes place byway of another late-night call of duty. We’ll see? But, I’ll be honest – something about being a writer on-call that night, having to puff my chest a bit and say “duty calls,” then proceeding to rally into a race mode so that I, if nothing but just for one more day, could chase my passion-lead-to-obsession-esque side hustle of writing and covering shows, made me feel… well…

I kind of felt like a badass…. I might be a LONELY badass if I don’t make reparations where necessary – but, as of this drafting, I think she still has my number saved?

Oh boy… I need to make a call quick.

In This Moment To Play Mankato On 5/21

In This Moment will be back in Minnesota on Tuesday, May 21st at the Mankato Civic Center Grand Hall. If you missed the band on December 8th at the Minneapolis Armory, when they were supporting […]

Robyn Reminds Me How Amazing My Job Is At The Palace

On my calendar there are shows, and then there are SHOWS!!!!! Seeing Swedish singer Robyn live had a spot on my concert bucket list since I started. Being in the photo pit last night was […]

Rammstein and I go back, way back. After moving to the US, I lost touch with the German music scene. No radio station played anything resembling it and there was no YouTube or streaming service […]