It’s been almost a year since the first time I got to see D.R.I. live. The last time I wrote about them, I said that if they ever came back I would drop everything to go see them.

D.R.I. was back in town last night. Sure, there were other shows going on that I could have gone to but I couldn’t miss an opportunity to see this legendary band because you never know when they might decide that they’re too old for this shit and stop touring.

Last year when I saw these guys I was shocked to see their singer, Kurt, out and about in the crowd. In my mind, these guys are one of the most legendary bands in the thrash scene. It was at that show last year that I figured out that Kurt the singer is the same as Kurt the merch guy. Just like last year, Kurt was behind the merch table slinging his own stuff. I said it last time and I’ll say it again, it was nothing short of refreshing and humbling to see this guy working his butt off and acting like a normal human, not a superstar.

I was starstruck when I was within feet of Kurt last year… absolutely star struck. Last night, it felt more just like a local show with a bunch of people hanging out. I was sitting at the bar right next to the three steps that lead down to the pit. I didn’t get nervous when Kurt walked by me. I would just nod my head with a little smile. He no longer felt like this unpersonable superstar, although there’s no denying his fame, but he felt more like a friend.
The best part about D.R.I. is that they never seem to change. The energy was the same as last year and there were familiar faces in the crowd. The only thing that changed was the set list. It’s super refreshing to be able to see a band multiple times and know what you’re going to get. They are never trying to be anything other than what they are and it’s perfect.

D.R.I’s songs are fast and dirty. They match that unexpected punch in the gut that you get from the kid in the pit that lost track of his space and ended up in your bubble. It’s truly hard to stand still when you’re at a D.R.I. show. It’s not just that you’ll be busy dodging the bodies coming at you from the pit, but more it’s just so high energy that your body will have a hard time staying still. 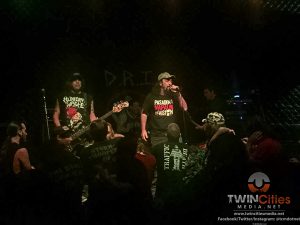 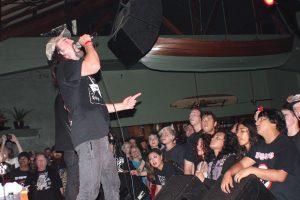 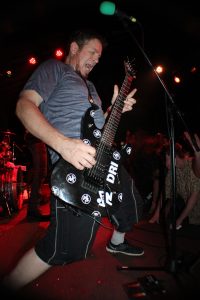 The show was opened up by local group Bonefire. I had never heard of these guys before because, let’s be honest, this really just isn’t my scene but I fell in love within the first song. These guys are actually a collective featuring members of Misery (MN), Trouble Maker (CA), and Social Schism (UK). You could tell that they had experience because, even though they were cracking jokes and having fun on stage, they sounded super clean and rehearsed. These guys, much like D.R.I had a very trashy and upbeat sound. Fast and dirty– the way it should be. 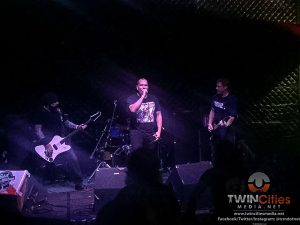 The only other band on the bill was Deathwish from Appleton, WI. Last night was actually their first night on tour with D.R.I. They will be on the tour for the next couple of weeks and are more than deserving of the honor. Like the other two bands on the bill, these guys were great. Their thrash sound stands out due to Jimmy Claypool on guitar. Jimmy used to be in In Defence (RIP) and is somewhat of a legend in the Twin Cities scene. Jimmy has a very distinctive sound when it comes to his guitar playing which is perfect when songs are super short and fast. It gives you something to remember about the band. 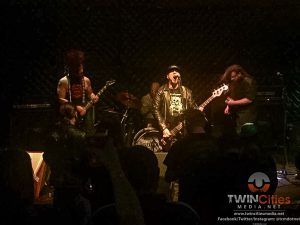 It’s so refreshing to be able to go to a concert and know exactly what you’re going to get. Some people might consider it to be boring and might even skip out on shows because they know what it’s going to be like, but for me, I consider it a classic and you never skip out on the classics.

Recently, I sat down with VNV Nation’s, Ronan Harris. It was so fun to pick his brain and learn about his creative process. I learned that VNV isn’t just a music project but more of […]

Despite the impression we may have gotten from the (hopefully) final, final Motley Crue show at the Xcel earlier this week, it is possible for Rock Bands to mature gracefully. Case in point: Social Distortion. […]

“Are You Local” with Nick Jordan, Gramma’s Boyfriend, and The Suburbs at First Avenue

The Star Tribune’s “Are You Local” contest crowned its winner Friday night at First Avenue: Nick Jordan. And to showcase the Minnesota Music scene they lined up artists that span 40 years of great local […]