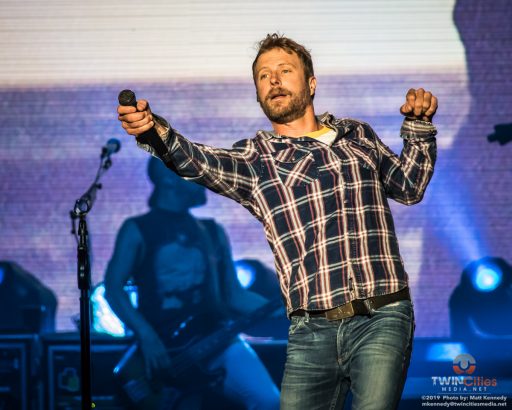 Dierks Bentley returned to Minnesota to play the “Great Get Together.” The night was clear and 72 degrees. The concert was a 13k SELL OUT !! The fans were ready for a down home Country concert. Dierks Bentley just released his ninth studio album June 8th 2019 “The Mountain”.  Dierks Bentley is currently touring the U.S. on his “Burning Man Tour 2019”.

Caylee Hammock opened the show at “The Great Together”. Over the past 13 years, Caylee Hammack has been paying her dues in smoky bars, Opry houses, and music festivals around the United States. At 19 years old, she made the move to Nashville and started working for her future full time, writing every morning and singing every night down on Broadway to pay her bills. Caylee released her first single in early 2019 “Family Tree” to Country Radio. Never did she believe she would be opening for “Dierks Bentley”.  Caylee played a solid forty five minute set. The fans loved her energy and lyrical ability.

The Lights went down and the stage was all quiet. The 13 thousand fans new Dierks Bentley was up next. All was still until the band found its way to to the stage, and all the fans went crazy.  The lights came uo to Dierks opening the show with song “Burning Man”. The set was a pounding of Dierks Bentely hits one after the next. Dierks ROCKED “The Great Together”. Dierks played monster hits like”BlacK”,”5150″,”Women,Amen”,”Drunk on a plane”. What a great show !! I have photographed Dierks Bentley Several times and I am a fan a huge fan of Dierks.  Dierks is a must see.

Cymbals Eat Guitars from Staten Island opening for Say Anything last Friday. no images were found