The DESENDENTS, a Pop Punk band from the late 70’s are making their way to First Avenue in mid-September. The band is no stranger to this stage as they have played here countless times over their long career.

Every Descendents album is an event. Formed in ‘78, the band’s first releases have proven historic, and all the ones since have only further refined the Descendents concept. Punk, pop, buzzing, summery, heartfelt, defiant, adolescent, and wise all at once — the Descendents sound never gets old. And while fans got the band’s full story in the acclaimed documentary, Filmage, it’s been twelve years since there’s been new Descendents music. Finally, here comes their long-awaited next LP, Hypercaffium Spazzinate.

Descendents’ first Epitaph Records release since Everything Sucks in 1996, Hypercaffium Spazzinate began taking shape after the band ended an extended hiatus to play live in 2010. Though still tight, they lived apart: singer Milo Aukerman — whose cartoon rendering famously serves as the band’s logo — was now living in Delaware, bassist Karl Alvarez and founder and drummer Bill Stevenson were in Colorado, and guitarist Stephen Egerton had settled in Oklahoma. So the album came to life over three years as the band sent tracks back and forth, occasionally meeting up in Karl and Bill’s adopted hometown of Fort Collins. Adopting such a protracted process meant not having to rush things, allowing for some of their sharpest songwriting yet.

It’s an album every bit as charged as the band’s iconic full-length debut, 1982’s Milo Goes to College — or anything since. “I think one of the things that’s kept us inspired over the years is having the music as an outlet for our frustrations,” says Milo, who delivered a particularly impassioned, even aggressive vocal performance. “Having the freedom to completely blow my voice out every time I recorded was a very positive experience for me,” he says. Personal catharsis is also a prime motivator for Bill, who names “my relationship priorities and my own faulty psychology” as his top inspirations. “In a way, putting pen to paper and getting whatever you need to get out of you is the big accomplishment—and if it happens to make the record, that’s neither here nor there,” he says. 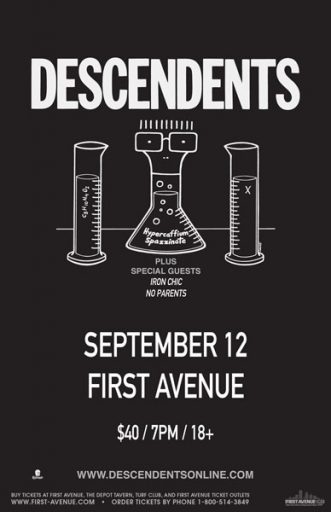 One of the groups joining the band will be Iron Chic. This early 2000’s punk band out of New York has been making a name for themselves both in their originating city and across the globe. With four albums under their belt, the group is sure to be up to the task of opening for the DESCENDENTS.

The other opener of the night is No Parents. This angsty pop-punk band has been making a name for themselves since their debut album released in 2014.