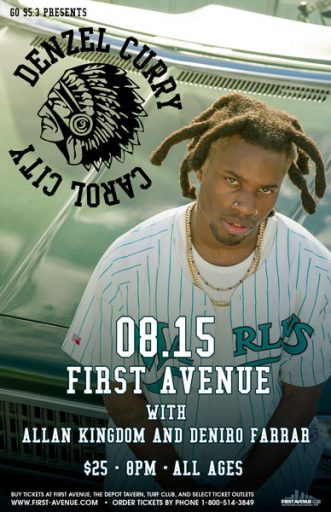 In 2018, rapper Denzel Curry busted into the scene with his debut album “TA13OO”. The album received incredible praise and showed promise for this young Florida rapper. Then in May of 2019 Curry took it a step further and released “ZUU” his second album and completely avoiding the sophomore slump. The album pushed him with enough force to even open up for Billie Eilish on her most recent tour. The album “ZUU” also brought Curry back to his roots. He raps about the violence in his hometown in Florida he saw growing up. The fast beats and upbeat tones drew in a larger crowd and now has brought him up to the point of stardom.

Curry has two openers, Allan Kingdom and Deniro Farrar. Kingdom is direct support and a sort of hometown hero. Born in Winnipeg, Kingdom’s family moved to the Twin Cities while he was a young age. Here he started to make music on his computer at home with people he met on the internet. His first EP was critically acclaimed by City Pages, Complex and even people such as Kanye West and Denzel Curry. Both of which have appeared on tracks with him or has had him as their guest. Kingdom’s latest release is called “LINES” and has only propelled him further into his career.

With not much information on Deniro Farrar on the web the mystery of him is intriguing. Hailing from Charlotte, North Carolina, he calls himself the leader of cult rap. Farrar has collaborated with countless other rappers, which makes each song unique and different. He raps about his times on the streets and surviving them, all while keeping a calm and collected voice.