Neo soul singer D’Angelo hit the US charts in 1995 with his debut album Brown Sugar at #22, Voodoo at #1 in 2000 and then retreated form the public (except for some singles). His “surprise” 2014 CD Black Messiah, promptly returned him to the top ten. Black Messiah was well received by fans and critics. His “Second Coming” tour finally made its way to First Avenue yesterday. The show has been sold out pretty much since tickets went on sale.

First Ave was packed, the AC struggled to keep up with the punishing humidity and the show was running an hour behind schedule. Sounds like a recipe for disaster, right? The crowd was actually pretty friendly, openers LP Music jammed their hearts out and I swear someone said: “It could be worse, it could be snowing”.

Once D’Angelo hit the stage, all those gripes were forgotten. The opening sequence concluded with the band’s backs to the audience and arms raised in dramatic fashion. From there D’Angelo took over showing that he has retained the great stage presence that made him a star in the 90s. All the elements of a classic soul band were in place and worked well together. The key ingredient was D’Angelo himself, he seemed to be having a blast and fed on the audience having a great time as well. 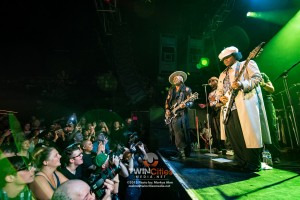 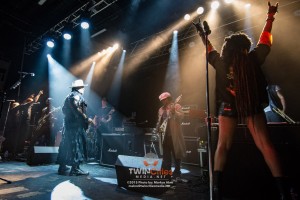 D’Angelo’s vocal range is impressive he moved from tenor to falsetto seemingly without effort. His interactions with the band also were fun to watch. This was my first time covering a Soul concert and I left deeply impressed. Every single person at First Ave had a great time and that’s a hell of a way to spend Sunday night.

Vinyl Theatre, Versperteen, Whosah, Garage, Burnsville, Concert, Review, Show, Live After riding out a long Easter weekend in the restaurant, I was eager to spend my free time photography a show out at The Garage. […]

Children of Bodom, Abbath, Exmortus, and Oni To Close Out Mill City Nights on November 30th

Finnish Metal Superstars Children of Bodom are embarking on a 21-date North American tour with special guests Abbath, Exmortus, and Canada’s progressive metalheads Oni. They will be making a stop at Mill City Nights in Minneapolis on Wednesday, […]

Neisen’s Sports Bar & Grill in Savage was totally dominated by Heavy Metal on November 11 for Swordmetal Fest VI. Twenty bands filled the line up for this years event with music genres covering Heavy […]