So apparently being voted Best New Band by City Pages, gets you some unwanted attention from the Criminal Element (and not the criminal mastermind, but the low life steel from a hard working band kind).  Some douche swiped Last Import’s cash box in Nashville.

Support them on Fundly HERE

The band’s statement: “Someone stole our money lock box from our Nashville show with over $1000 in it. That was ALL our money for gas, to pay back for merch, and keep us afloat as a band. Anything helps, we appreciate it all. Thank you!!”

The Jolly Pops at the Parkway Theater – TICKETS 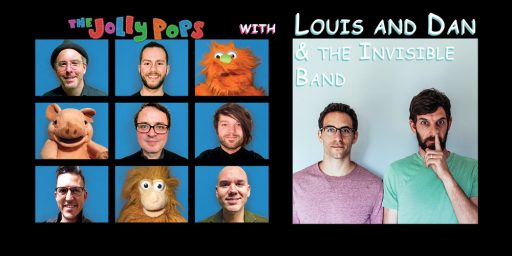 Mr. Billy is back! The Jolly Pops are set to release their 3rd studio album, “Bad Bad Dinosaur”, summer of 2019. The 12 new songs cover a lot of musical ground and include tips on how to handle an out of control dinosaur pet, detailed instructions for a proper fist bump and finally answers the ancient question, “Who’s Cheese is this?” (Answer: “Nacho Cheese”.) It’s everything a family needs to have fun and everything a kid needs to be a kid.

The Jolly Pops are fast becoming MN’s premiere choice for early childhood education facilities and family music venues. With over 75+ concerts and school appearances this summer they are set to reach an even bigger audience than ever before. The three-month tour will also include a new multimedia LCD display to help the songs and Mr. Billy’s famous puppets come to life on stage. So mark the family calendar and get ready to rock!

Billy Hartong is the father of three young daughters and a French Bulldog son. He lives with his wife and family on a lake in Chanhassen, MN. Any given day you might find him in one of the 100 Preschools he works at in the Twin Cities area. Or he might be at a park or library with his group of Dads “making music for the kids”.

Loki’s Folly at the Entry – TICKETS 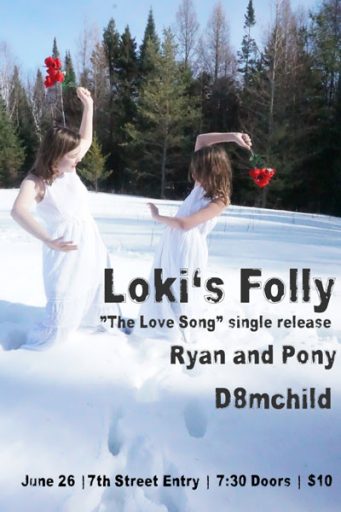 Loki’s Folly is an indie-punk duo comprised of two young sisters from South Minneapolis who like to play loud music that makes them happy. For a two-piece outfit, they make a very big sound that is all their own. When Loki’s Folly play, they bring you into their world. It is a universe where influences like Sleater Kinney meet the tradition of Swedish Kulning in the best possible way.

Annie (age 18) plays guitar and sings. Nissa (age 13) plays the drum set and sings. Each brings their unique personality to the music, and their sound is gelled by the blend of their sibling voices singing together. The band initially formed out of the girls taking lessons separately at Twin Town Guitars. They began having their lessons together and after a handful of sessions Loki’s Folly was born! It wasn’t long before people outside of the practice space starting taking notice.

The girls energetic and passionate live shows have been garnering a devoted fan base from longtime Minnesota musicians. Soul Asylum, Haley, Gramma’s Boyfriend, The Melismatics, and Ryan and Pony have all put them on local shows this past year.

Loki’s Folly celebrates the release of their debut single, “The Love Song” with a show in the 7th St Entry Wednesday, June 26th with special guests Ryan and Pony and Doomchild. Street date for the single is Friday, June 21st.

Frankie Lee at the Cedar – TICKETS 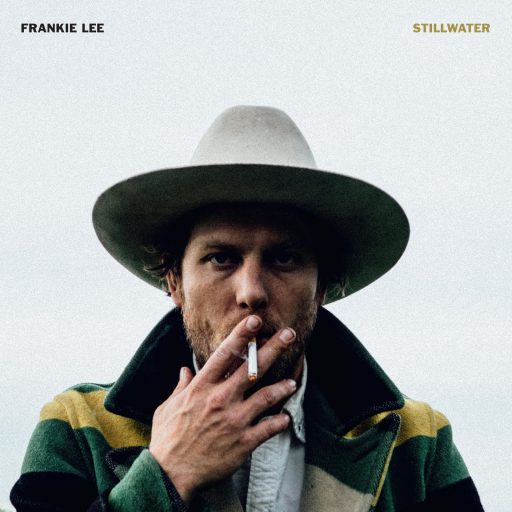 Stillwater is a small town between two hills in the middle of America. Frankie Lee was born there and has been running from it and to it ever since. Stillwater is also a record about life in middle America. A “record” meaning simply that, converting sound into permanent form. This is the story of how that record came to be.

For the recording of the follow up to American Dreamer – “debut album of the year” Rolling Stone – Frankie Lee had visited a few studios and they all felt like the same big production factories. He had spent the best part of a year wrangling livestock and had a pile of cash on the table to pay for the biggest and best gadgets which he then found he ultimately had absolutely no interest in. Lee wanted to get away from people who thought music should be made in isolation booths or that bigger was better. All the people who wanted the next big thing. Lee wanted to be the last little thing, he just had to find the right space to do it in.

One day Frankie Lee was walking down main street in his hometown and it hit him that he could bring the studio to them. Luckily, the house he grew up in was available. His mum had lived in the same house in Stillwater for most of Lee’s life. It’s a small cedar-sided house on an acre lot on the northern end of town, tucked back in the woods on a small hill, it looks like a log cabin.

So they packed in their instruments, tuned the old upright piano and rolled out a tape machine next to the wood-burning stove. Music was made from morning ‘til night. For three days straight, they ate together, stayed together and played together. Cutting six songs the first day and five the next, most of what they captured was first or second take. The music is minimal and warm. Lee describes his sound as “Western Music”, steel guitars and synths blend with acoustic guitars and omni chords. The musical brush is gold and green, dipped in deep blue. He slips in and out of time throughout the record. One line in a song could be its first or last. The song-stories are a blend of his own romantic grit. Ex-lovers, lost land and hope flung out of a car window, fraying in the wind.”

Autopilot at the Pourhouse – TICKETS 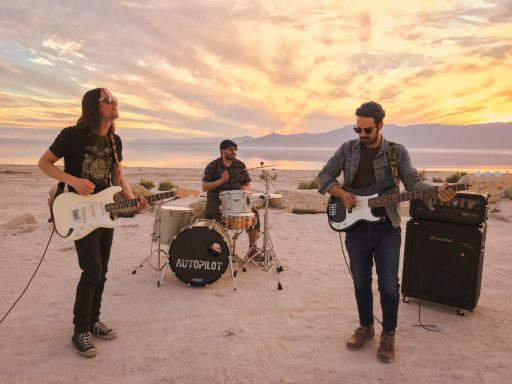 Over the last few years, Canadian alternative rock band Autopilot has become a staple in the Saskatoon indie music scene. Known for their thoughtful lyrics, powerful hooks, dynamic stage show, and obsessive hard work, they somehow seem to effortlessly walk the line between passionate art and massive appeal. Over the course of 3 full-length records, and one EP, they’ve become road warriors, touring relentlessly across Canada and the US. They’ve been praised for their tireless work ethic by publications like Canadian Musician Magazine, who called them “quite possibly one of the hardest working bands in the country.”

Autopilot’s highly anticipated new record Afterglow, their most impressive and accessible record to date, produced by legendary Saskatchewan producer, S.J. Kardash, and backed by their most ambitious marketing campaign yet, finds the band reaching for bigger sounds, bigger ideas, and much bigger audiences. The release of their new single “Undisguised” following the success of preceding singles “Living Dead” and “Weightless”, is proof positive of this growing momentum.

Multi-Platinum, Georgia-bred rockers COLLECTIVE SOUL–E Roland (vocals / keyboards / guitar), Dean Roland (rhythm guitar), Will Turpin (bass), Jesse Triplett (lead guitar), Johnny Rabb (drums)—are pumped and primed to celebrate their 25th anniversary in 2019 in all-out style, but they’re really just gearing up for the long haul. The band’s silver anniversary year will be a celebration of their ongoing legacy in all-out style with a little bit of the classic and a lot of the new. If you want to see them in Minnesota this year, you will have to head up to Brainerd to catch them headlining Lakes Jam on the 29

“’Right As Rain’ is a phrase I had for a while,” says singer/guitarist/keyboardist E Roland. “It was one my grandmother used to tell me about–one of those old Southern things, you know? ‘C’mon, I’m gonna spank you right as rain!’ I never really knew what it meant (laughs). While I was writing it, Peter Stroud (Sheryl Crow’s lead guitarist and musical director) was home one day in Atlanta, and we invited him over to play the slide-guitar solo on the song for us. We all just sat around together and jammed it out.”

From stem to stern, BLOOD delivers in full. Witness the hard-charging skitter of “Over Me,” the optimistic declaration of “Right as Rain,” the hopeful uplift of a man “Changed,” and the tender promise of “Big Sky.” The album’s final track — the reflective, poignant acoustified coda “Porch Swing” — features background vocals and tasteful dobro licks from none other than Styx guitarist/vocalist Tommy Shaw, who was beyond thrilled to contribute to the cause. “I’ve always been a fan of E Roland and Collective Soul’s recordings,” Shaw says. “I thought about adding more parts than what Ed asked me to do, but as someone wiser than me once said, ‘Don’t paint over the masterpiece!’”

BLOOD is the culmination of a quarter-century of COLLECTIVE SOUL assessing not only where they’ve come from, but also where they’re going. “I think BLOOD expresses where we’ve been on this life journey,” observes E Roland. “And we’ve done so with songs featuring piano and strings to those with a lot of guitar riffs. BLOOD is an accumulation of all the different styles we’ve used over the years, but it’s still COLLECTIVE SOUL. I think it’s the best we’ve ever done. I know you should think that, but I really do think it’s the best. It’s a good, consistent record. We’re just so proud of it.”

While the album title, BLOOD, maybe evoke many different thoughts and ideas, for the band, it all comes down to one word: family.

“So much of it is based on the camaraderie-ship of the band,” Roland explains. “All of us basically have children, and my brother Dean just had a baby girl. Jesse’s the only one who doesn’t have kids, but he’s basically a baby, in age anyway. My brother’s in the band so there’s blood there, but the five us — it’s a family.”

From the very beginning of the band’s career, Roland always had his eye on the prize. “When ‘Shine’ came out, we got asked, ‘What’s your goal with this band?’ I said, ‘I want to have a whole row of Collective Soul recordings on the shelf.’ That was my goal,” he recounts. “Me, I always wanted to see the full body of work. That’s all I ever wanted. I knew I could write, and as the band progressed and got better, that’s why we wanted to keep going. I don’t think we ever doubted it. We, as the artists — we had no fear. The guys in the band have enough faith in my songwriting, and I have faith in them.”

“For us, we want to play the hits as we always do, but I think we also want to share the new record with our fans,” E Roland explains. “At 25 years later, we want to say, ‘Hey, we’re still making the best that we can do.’ Right now, I’ve got seven of the new songs in the setlist, and hopefully, on some nights, we can play the whole thing from start to finish. I mean, it’s our 25th anniversary. We’re going at it hard, everyone! We’re going hard.”