Close Talker at the Entry – TICKETS 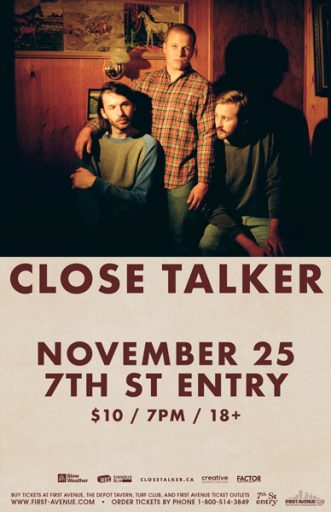 Close Talker is an indie rock band from Saskatoon, Canada. The band has toured throughout North America and Europe, and has gained the attention and praise of notable publications such as NPR, Billboard, Clash, Spin, Q Magazine, Consequence of Sound etc. Having recently won Alternative Artist of the Year at the Saskatchewan Music Awards, the band is poised for a breakthrough 2019.

Beyond Close Talker’s recordings and videos, the music comes alive with the band’s iconic live show, leaving audiences around the world satisfied, having left all inhibitions behind. The band works tirelessly on evolving every aspect of their craft, which has led to their strongest and most confident album to date: How Do We Stay Here?, available worldwide August 30 via Slow Weather (NA) and Sinnbus (EUR).

In so many ways How Do We Stay Here? marks a new chapter for the band. The three members leaned into the trust and foundation built over countless years of friendship to pursue a record that would be sustainable and timeless for them. Choosing to selfproduce allowed the band to hold this album close to their chest while it developed organically over the course of 2018 at RMS Labs in Regina, SK. At its core, the album is laced with a quiet confidence that invites the listener to dig in, finding new appreciation with each spin. Close Talker, now more than ever, is interested in music that is timeless music that won’t force the listener into feeling a certain way.

Allah-Las and Mapache at the Fine Line – TICKETS 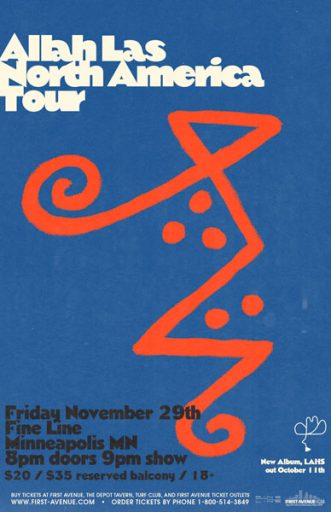 “A ship in harbor is safe, but that’s not what ships are built for” the saying goes. But suppose the proverbial harbor is Los Angeles — a place not particularly known for being the origin of adventures. From the Spanish Conquistadors to the countless starry-eyed nobodies hoping to make it big, LA is usually the destination. So it’s no wonder the Allah Las became fascinated with both the carefree spirit and glitter-in-the-gutter lifestyle of their hometown. After three records mining its lore and lure (from the desert to the sea) they have become global ambassadors of not just a place but a location.

Consisting of three charismatic covers, Lonesome LA Cowboy encompasses decades, genres, and even international borders. Tapping faithfully into an era that ended well before their births, Mapache’s performances here conjure up dry desert breezes and lush coastal canyons with a distinctly southwestern brand of harmony-driven folk and country that’s at once vintage and contemporary. The pair relies on nothing more than acoustic guitars and enchanting vocals to work their magic, pulling influence from the architects of American roots music as well as formative years spent living in Mexico and filtering it all through modern, youthful sensibilities. It’s music with little regard for boundaries or barriers, reverent of the past but fully immersed in the present.

Radiochurch at the Entry – TICKETS 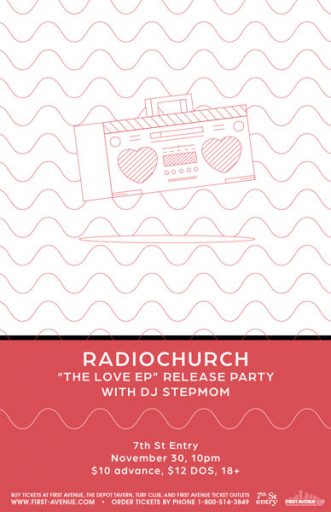 Radiochurch is a group based in Minneapolis, MN whose honest, feel good music has been making waves in the Twin Cities. Each member brings their own unique perspective and style, creating a fluid and dynamic experience that lends itself to any music lover. Joining forces once again with producer Jason McGlone (Nooky Jones, McNasty Brass Band) to record their sophomore project The Love EP at The Hideaway Studios in Minneapolis.

The Love EP is a charming collection of love songs that have a nostalgic “mixtape for your crush” vibe. From the spacey bop of “Central Ave” to the feel good groove of “2+2”, Radiochurch writes a love letter with The Love EP that’s a refreshing must hear to wrap up the year.