As a child of New Wave, I should have liked The Church’s music a long time ago. Of course I knew “Under The Milky Way”, but it wasn’t until a couple of years ago when I got to see them live at the State Theatre that I really started to listen to more of their music and loving it. Fortunately for me, I was not too late to jump on that bandwagon as the band keeps working on new music and just released “Man Woman Life Death Infinity” and their current tour brought them to The Cedar last night.

DJ Jake Rudh greeted fans with a playlist that took us from The Beatles to XTC setting the mood expertly. 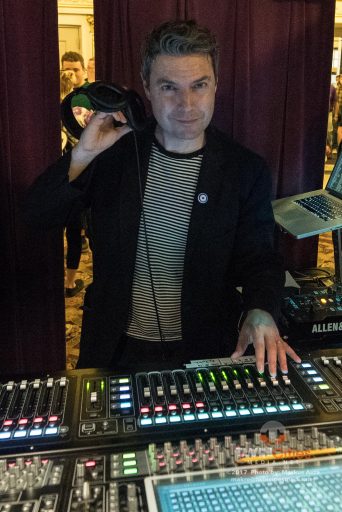 Opening the show was Oregon duo The Helio Sequence. Their music is good straight forward indie rock with pop influences. A harmonica made a surprise (to me at least) appearance in “Everyone Knows” and their last song has some very interesting looping to build out the guitar riffs. Overall an enjoyable set, that has me listening to more of their music.

Fans were ready for The Church. There was a – civilized, we were at a cultural center after all – rush towards the stage, and one woman exclaimed “I can see Peter’s hair” as they emerged from the green room. After a short intro “Aura” immediately set the mood. Steve Kilbey’s voice captured the crowd, to me he always has an edge, an almost sinister quality in his singing that gets my attention.

“Metropolis” was introduced as “your favorite song” and “the favorite song of the guy in Green Day who wears the eye makeup”.  One of the songs had “If I had a hammer” woven in. The set drew from The Church’s extensive body of work – 26 albums and counting – with several songs from their new album before closing with the 2 songs that pushed the band into the public’s eye all those years ago.