It’s the 21st century and Renaissance men sure don’t look like they did a few hundred years ago. Case in point NYC’s Action Bronson: Rapper, TV Host, Chef and world traveller. Promoting his latest album “White Bronco” he will be at First Avenue on 2/24. Tickets are available HERE 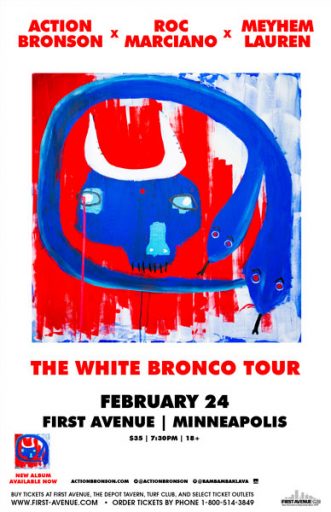 A burgeoning media mogul and a celebrated figure in the culture, Action Bronson never stops working. Born Ariyan Arslani, Bronson started his career as a gourmet chef, rapping only as a hobby, until he garnered overwhelmingly positive critical attention with his first mixtape Dr. Lecter, released in 2011. Packing his rhymes with references to fine food, culinary practices, professional wrestling, obscure sports figures, and more, Dr. Lecter and its popular follow-up Blue Chips quickly built Bronson’s reputation as a lyricist.

Signing to Atlantic Records through a partnership with VICE, Bronson charted at #7 on Billboard with his major label debut Mr. Wonderful in 2015, which featured the Gold-certified single “Baby Blue,” featuring Chance The Rapper. Since the release of that album, Bronson expanded into filmed media, starting a web-based mini-series for Vice entitled “Action in the Kitchen,” which played off the artist’s love of food and music.

The success of “Action in the Kitchen” led to F*ck, That’s Delicious, a full-fledged TV series and a flagship show on Viceland, where Bronson travels the world, meeting chefs and cooks and tasting everything from haute cuisine to street vendor favorites. Bronson also released a cookbook of the same name, which spent several weeks on the New York Times Best-Seller list. Bronson expanded his television empire into the realm of the metaphysical with Viceland’s 2017 series Traveling the Stars: Ancient Aliens with Action Bronson, and he currently hosts “THE UNTITLED ACTION BRONSON SHOW,” a free-form talk show on Viceland. Bronson ended his relationship with Vice in 2018 and independently released his album White Bronco on November 1, 2018.