For the many times I have seen Black Sabbath perform, it was with a little bit of sadness that this will be the last time they would step on Minnesota soil. Monday night, the legendary Black Sabbath took the stage at Target Center in Minneapolis to really say “Goodbye.” With a capacity crowd looking onto the stage, the fans (young and old) bid a respectful farewell to Ozzy Osbourne, Geezer Butler, and Tony Iommi.

Sabbath’s worldwide tour, dubbed “The End”, is said to be the bands final hurrah. Nearly 50 years after first forming, Black Sabbath took the stage with a thundering version of “Black Sabbath” — a song that essentially stands at the foundation for all heavy metal. 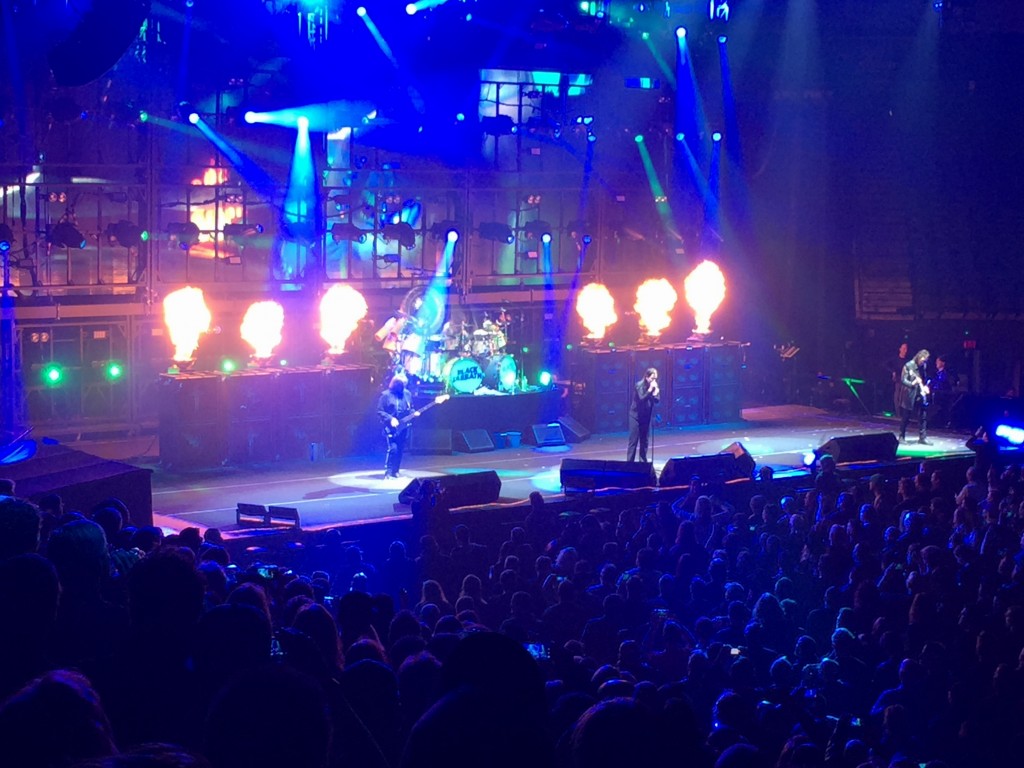 The performance was extremely well executed. It was not only clear and driving and visually stimulating, but also dug into the band’s roots. Black Sabbath basically invented heavy metal. Back then, they were just four guys in Birmingham. Fast forward 50 years and their guitar tones, howling occult lyrics, and slamming drum beats are standard metal stuff, and those same guys stood in front of thousands of cheering fans performing like they were in their prime.

Monday’s show was just shy of a sellout, and people were packed to the rafters to watch the band kick things into high gear with a no-nonsense 2 hour set. The thousands heard the first ominous notes of “Black Sabbath” and jumped to their feet to hear the band run through its classics. Backed by a screen full of psychedelic video streams and flanked by six flaming pyres, frontman Ozzy Osbourne, bassist Geezer Butler and guitarist Tony Iommi dressed all in black for the occasion. They were joined by drummer Tommy Clufetos, who has sat in for original drummer Bill Ward for several years.

At center stage, Ozzy stood as the captain who essentially navigated the band through many classics. At age 67, Ozzy’s energy was at a refreshing level. His mannerisms on stage reminded me of the ‘prime days’ and his showmanship shined through.

Tony Iommi was pure thundering bliss on guitar. Playing some battered-up, well-used Gibson SGs, the legendary picker had a thick tone that was often menacing, sometimes forceful and always bursting with lightning. His guitar trills remain as a force to be reckoned with as the attack is performed with pure precision.

Geezer Butler availed himself well, especially on the band’s more recognizable basslines such as “War Pigs” and “NIB”. He tore up bass lines like there would be no tomorrow.

Tommy Culfetos beat the drums like he hated them. There were plenty of moments when a double-glance at the drum kit was needed to remind myself that original drummer Bill Ward was not really playing the given song. Top notch!

It was hard to realize that it was over and that Black Sabbath will no longer tour. In the first part of the night, Ozzy said, “This is the beginning of the end for us and I just wanted to say thank you for all of your support all these years.” As the performance came to a close, Ozzy offered a very meaningful “Thank you. Goodnight. God bless you all.”

Encore:
Children of the Grave

Black Sabbath continues their tour through the states. For all the latest info, be sure to visit them online at BlackSabbath.com.

The Target Center is a great venue to see artists perform or see sporting events like the Timberwolves and Lynx. For all the information about upcoming events and for tickets, visit their site online at TargetCenter.com.

The Specials make the Austrian dance at First Avenue

As Trampled by Turtles closed out Festival Palomino, First Avenue’s Mainroom got ready for more lively fare. Ska was back in town and if there is one defining band that been carrying Ska’s battle flag […]

Girl Talk Brings The Party To A Sold Out First Avenue

I still remember the amount of excitement I felt when I bought my ticket to Girl Talk back in February of 2020. I also remember the heartbreak when the pandemic took hold of the live […]