For the 3rd year in a row the X Games are returning to US Bank Stadium and the Armory starting today. Last year almost 120,000 fans attended in person and millions watch on TV and online. Being the only indoor X Games events has benefits and challenges.

We got a tour of the almost finished setup at US Bank Stadium on Monday and talking to Rich Biggie, the X Games Director or Events and Logistics we learned a lot of what’s new and different for this year. After taking possession of the stadium a couple of weeks ago the crew moved almost 20,000 cubic yards of rented dirt inside – yes you can rent dirt :). The ramps and jumps are being built in a layer by layer method. 150 cubic yards of concrete were poured for the street and park courses.

What new? Well, E-Sports are returning with an Apex Legends tournament scheduled. Huck Technology is a new system that displays the jump height in real time. There will be a Special Olympics Unified BMX Racing Event. Oh and the Vert event for BMX and Skateboard? That will be inside at the Armory Thursday night surrounded by live performances by SWMRS and Chevy Metal.

At a press conference yesterday we met several of the athletes competing and learned a lot about what makes the X Games so special for them. 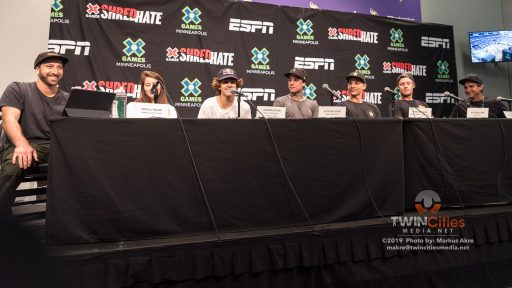 Turns out R-Willy had never been on a Lime Scooter before, he had rented one on Tuesday but declined to comment on what tricks he performed on it.

Nicole Hause? She’s the unofficial Team Mom of the Women’s Skateboarders being the oldest at 21.

Jagger Eaton – His little brother is competing and according to Jagger is a beast – watch out for that one. He also want to really play in the Apex Legends tournament.

I grew up in a time when the Olympic Games (or any sport) was very much a West vs East thing with the Soviets always being the bad guys. X Games and extreme sports are much more about camaraderie and everyone mentioned how much they enjoy meeting the other competitors.

The X Games were the influence on all of them. Yes Skateboarding is finally an olympic sport (20 years after snowboarding). But X Games remains the pinnacle for all of them. Don’t ask them about their opinion of speed walking – you might get an earful.

All of them are enjoying the hospitality the X Games and Minneapolis have been extending them. According to Hause catering for most competitions is a bag of Skittles at best. Getting the red carpet treatment certainly seems like a great reward for the hard work.

So if you have any time this weekend, check out the X Games. Tickets are available HERE

Friday at The X Games Shows Crowd The Definition of Passion

Images by Fred Sobottka and Markus Akre I used to pretend like I was a skateboarder. I hung out at the local skate shop in Des Moines, obsessed over Tony Hawk Pro Skater and, at […]

Coldplay brought their Head Full of Dreams Tour to Minneapolis’ U.S. Bank Stadium for a colorful evening of music, larger than life special effects and a heartfelt message of connectedness and positivity. The world-famous four-piece […]

With the Fall season upon us, I always look forward to the start-up of the football season. From youth football to NCAA to the NFL, the amount of football competition is always in the air. […]