If you were looking for a dose of local music, then The Park in Fridley was the place to be on Saturday, April 9th!!  Antistar, Gabriel and the Apocalypse, My Zero, and Midwest Mayhem played the 93X Loud and Local show and they really rocked the place!  I showed up early to get a few photos of Antistar before the show and grab something to eat, (really good food at The Park!), and there was already people showing up.  The closer it got to showtime, the more the place filled up.

Midwest Mayhem started out the show.  It may have been a little odd to have a cover band open the show, especially since the music didn’t quite fit the rest of the bands, (of which the band mentioned as well), but they still went up there and had a great time!  They did play an original song during their set and I’d be interested to hear more from them.  Photos of them are in the slideshow below.

Pablo from 93X got up and made a few announcements about the contest going on during the show, to make sure we vote for Antistar in the Northern Invasion Battle of the Bands, and to plug the new 93X Brotherhood Brew, (the beer he’s holding in the photo below). 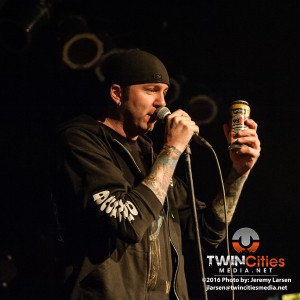 Next up was My Zero and even though I hadn’t seen them before, it was obvious a lot of people at The Park had.  They were up at the stage to get an up close view of the show.  My Zero had some instrument issues, but they shook it off and continued anyway and put on a great performance!  As it says on their Facebook page, they are influenced by Nine Inch Nails and Faith No More, and I could hear that during the set.  When My Zero’s set was done, they had set the pace for the rest of the bands.  Check out my photos below.

Gabriel and the Apocalypse took the stage after Pablo announced one of the winners for Northern Invasion tickets and leveled up the excitement at The Park!  Again, I didn’t know what to expect, but loved their performance.  One of the members from My Zero was also in this band and I always wonder how they can keep up the energy for two sets.  She had no issues doing that though and kept up just fine with the rest of the band members.  At one point, I was sprayed by what I thought was water, but turned out to be fake blood!  That was unexpected, but also interesting to see the reactions from others in the crowd.  They put on a great performance and everyone in the crowd stayed up by the stage the entire set.  Gabriel and the Apocalypse was also very fun to photograph!  You can see my photos below.

Pablo came up once again to give away the guitar from Capitol Guitars and then got the crowd excited for Antistar!  Before I get into Antistar’s review, I’d like to say how happy I was to see members from other local bands yet again showing their support.  Whenever I go to see local bands in the Twin Cities, there is always support from the rest of the local bands.  I think that is great!  Anyway, on to Antistar.  Since they were the only band I had seen before, I knew I was in for a great show.  I was excited to hear them announce they were playing all the songs from the new CD, since I was looking forward to hearing the new material.  I couldn’t help but get distracted while I was taking photos and found myself listening and watching the show instead of taking photos.  The intensity between Shawn and Elissa while they performed “Vixen” was simply breathtaking.  I could feel the emotion from the band rolling off the stage the entire set.  They were definitely excited to be playing the new material for the packed venue that had come to see them.  Keep an eye out for Antistar, these guys are on their way up!  Photos were a little more tricky as there was heavy backlighting for their set, but you can see I managed to work with it in the slideshow below!

Another great show in the books!  This was one I’d been looking forward to for a while and I definitely had a great time seeing damn near everyone I’ve meet at similar shows since I started taking photos in this area!  I’m looking forward to many more!

As always, get out there and support live music and I’ll see you out there!

Martin Sexton And Chris Trapper Light Up The Ordway

It’s crazy how a single song or just a voice can instantly flood your brain with some of the best of memories. Not going to lie, I went to last night’s show searching for that. […]

Guitar-Stringer Comes To Town. Jimmie Vaughan At The Dakota

For the 40th or 50th time I want to begin by saying how much I love shows at The Dakota.  Heading in for a remarkable, ever changing menu followed by a world class performer in […]

Bad Suns energize the crowd at The Cedar

After last night TCM will have to come up with a trophy for “most improved audience”. I saw Bad Suns last fall at the Fine Line and it was good, but last night’s show at […]