After 2 long years of reschedules and venue changes and lockdown after lockdown, its finally happening!!! Amyl & The Sniffers are coming to Minneapolis at the Fine Line on 5/13.

Melbourne-based, ’70s rock-inspired punk four-piece Amyl & the Sniffers emerged in the late 2010s as part of a new wave of punk from Australia’s East Coast. Sporting a diverse range of mullets and a lawless attitude, the band channeled the unruly energy of their live shows on EPs such as 2017’s Big Attraction, a wild blend that recalled early Yeah Yeah Yeahs, Motörhead, and Courtney Barnett. Their self-titled full-length breakthrough landed in 2019, earning the quartet international acclaim. In 2021, they returned with sophomore set Comfort to Me.

The band’s origins lie in the bedroom-recording sessions of housemates Amy Taylor (vocals), Bryce Wilson (drums), Dec Martens (guitar), and Gus Romer (bass). Taking their cue from an unlikely set of influences — AC/DC, Cosmic Psychos, Dolly Parton, and Die Antwoord — they huddled together in Taylor’s room to write, record, mix, and release their debut EP, Giddy Up, in 12 hours. That 2016 set was followed in 2017 with the self-released Big Attraction EP, which featured “I’m Not a Loser.” The track was illustrative of the band’s instinct for a killer hook and demonstrated their low-rent charm and snotty sense of humor.

While steadily gathering an infamous live reputation, Amyl & the Sniffers began to secure slots at festivals like Bigsound in Brisbane, Meredith, and CherryRock17. Following such successes in their native Australia, word began to spread, leading to interest from British and American labels, which issued their early EPs in 2018. That same year, the band embarked on their first headlining U.K. tour and hit the road in support of King Gizzard & the Lizard Wizard across America before signing to Rough Trade. Their debut LP, Amyl and the Sniffers, arrived in the summer of 2019 and included the singles “Monsoon Rock” and “Got You.” It later won the ARIA Award for Best Rock Album. After their own headlining trek helped push them deeper into mosh pits around the world, they returned home for a follow-up. Amidst the turmoil of Australia’s wildfire season and a global pandemic, the band hunkered down in the same home and began recording their sophomore effort, 2021’s Comfort To Me! Comfort To Me, which was co-produced by the band and Dan Luscombe, is the follow-up to Amyl & The Sniffers’ critically acclaimed 2019 self-titled debut album. With its lyrics largely written during the Australian Bushfire season, when The Sniffers were already wearing masks to protect themselves from smoke in the air, Comfort To Me came together in a 3-bedroom apartment where the four band members were quarantined together during COVID-19 lockdown. The result is a less spontaneous and more darkly considered record that masterfully captures the essence of the band like never before.

The show is currently SOLD-OUT but keep checking closer to the show date for possible newly released tickets. 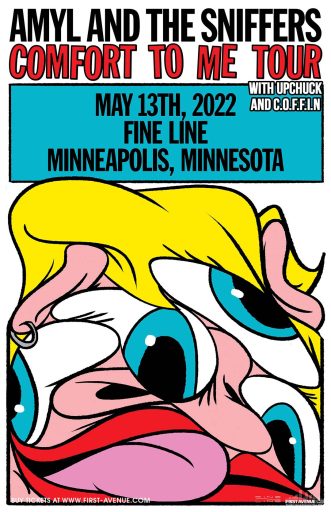 Parquet Courts turned the First Ave Mainroom into a giant mosh pit/rave hybrid on Thursday night. Punk is alive and well thanks to these guys.  Yeah I called them punk. This is what I imagine […]

I was completely out of my element when I got in line for the show last night and honestly, I was beyond annoyed. The young crowd was turnt (at least that’s what I think the […]