Alison Moyet was truly an experience I was not ready for when I walked into the Fine Line and noticed that I was probably one of the youngest people there. I had discovered Miss Moyet through her newest album; “Other” which was a fun blend of laid back electronic pop, that wasn’t afraid to experiment. People around seemed as excited as I was, like most are when a former 80’s star comes into town, and I remembered then and there why I’d missed getting into concerts. These were all people waiting to see an old favorite again, and you could tell the anticipation was absolutely killing them.

Moyet built up this anticipation when she began her set with a poetic piece of spoken word over ambient sounds and tones. The people had gone completely silent as they waited for her to grace the stage, but nobody could stand still. After the monologue ended, she approached the stage to the cheers and borderline screams of her fans like an angel with a halo of red hair around her. She began her set with “I Germinate”, A powerful start to her album and this evening. Though not A few verses in, she had to stop, due to a mistake. She took this chance to cut the band, and instead of pretending nothing had happened she decided to joke with us about it. “So much for that dramatic entrance.” was the summation of her attitude as she interacted with her crowd, but she did it with a smile and good humor. We expected this absolute goddess to bless us with her voice, and while we were at it, we got one who reminded us that we all make mistakes.

After welcoming her people, she stepped back and then started over again better than ever. She blew the place out of the water with her newer songs, which made sure I never got bored during the entire 21 song set list. In between songs she spoke to the audience every time, thanking us constantly and she wasn’t afraid to let us sing along into the microphone. She even dedicated one song in the night to a fan who had gifted her something (She didn’t specify what) backstage, whose name was Randy. She truly sang “Man in the Wings” like she was singing it for him. She seemed so eager to truly connect with her audience, even telling us a story about how she downsized to a terrace, and that it felt so incredibly good just to throw away all of her things. “It’s so good not having stuff, stuff is such rubbish.” Was how she described the move, making us laugh before she got back into her show. 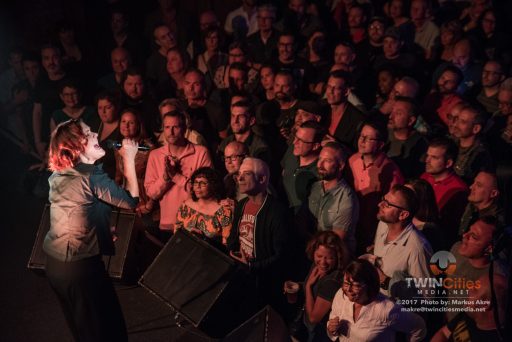 The crowd went nuts when she sang “Only you” It’s like what they had been waiting for all night and she’d just thrown them the most delicious teaser of what was to come. She also gave us “Nobody’s Diary” And “Don’t go”, which were just minutely adjusted for a live show. But her voice made them feel newer again, which was refreshing.  I must say her voice has only gotten so much more beautiful with age. She wrote her songs to compliment the way she sang, but also to challenge her range, which is something I can deeply appreciate as a choir kid myself. Her range of musical styles from slow ballads, to dramatic songs, and tunes that got every single person in the crowd dancing was equally impressive.

Overall; the night for me was a pleasant surprise. I didn’t feel like I was just watching another person on stage, I felt like I was watching someone who love what she does, and she put her whole heart, body and mind into every song she sang. She was one of the most down to earth people I’ve watched perform, and I would love to see her again. Although “Nobody’s diary” is stuck in my head all over again and I cannot find the heart to be upset with that.

Gwar Brought The Blood And Early Halloween Vibes To The Myth

Seeing some bands will never get old. Last night may have been my 48th time seeing Gwar in concert but I felt just as excited as I did the first time I saw them. A […]

The BoDeans And Phipps Fest Rock The Hudson Lake Front

On Saturday, August 14, the BoDeans and 3 other bands performed in the Lake Front Park Bandshell in Hudson, WI as part of Phipps Fest.  The weather was beautiful and there was a variety of […]

Final Countdown to the 2019 Metalsota Metty Awards on January 19th

We are in the final countdown for the 2019 Metalsota Metty Awards on January 19th at the Amsterdam in St. Paul which will highlight the very best in the Metal scene in Minnesota. . In […]